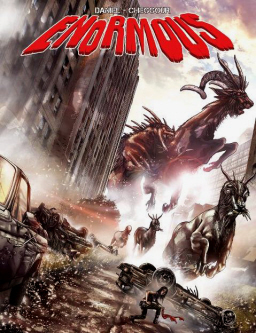 One thing I like about comics: they’re all about the impulse buy.

I can’t afford to impulse buy books, or my house would be full of them (well, more full than it already is). But comics are a different story. My weekly trip to the comic shop is all about buying whatever catches my eye.

Sure, there are titles I follow regularly — Ultimate Spider-Man, Fables, the brilliant Atomic Robo — but the comic shop is one of the few places I can still afford to experiment, and pick up a book just because it looks intriguing.

Some experiments work out better than others. Last week I found an odd artifact on the racks: an oversize graphic novel from Image Comics called Enormous. The artwork by Mehdi Cheggour looked spectacular, and Tim Daniel’s story — something about a planet-wide ecological catastrophe, desperate search-and-recovery efforts run out of an abandoned missile silo, and gigantic monsters towering over the ruins of America’s once-great cities — was precisely the kind of thing comics were invented for. I added it to my weekly selection without another thought.

Unfortunately I still don’t know much about Enormous, even after reading it. Yes, Cheggour’s artwork is spectacular, and Daniel’s story is something about an extinction level event and a desperate search for survivors. With giant monsters. The individual panels are marvelous, but the story is pretty much incomprehensible.

The story begins with Ellen, searching for children among the ruins of Phoenix, 17 years after the Alchem System Inception (whatever that is). After one panel, the story leaps back in time to the fall of Phoenix (I think), then back again to the present. Ellen’s desperate search leads her to three children, who are serving as bait for a trap. Possibly. It’s not clear. The dialog is crisp and the action fast, but it’s impossible tell any of the characters apart, and God help you when the monsters finally attack, because all attempts at a cohesive narrative are abandoned at that point. It’s not so much a comic book as a series of random frames from what looks like a really great monster movie.

It’s too bad, because the hints of storyline you do pick up are tantalizing and original. There’s a mystery about the origin of Alchem and a back story for the villain (who I thought was two people for the longest time, until I realized the sinister Coyle and the vicious James were actually one guy, James Coyle, and the artwork was too muddy to tell. Unless they are two guys and I’m just confused.) But after about 20 pages, you stop caring. When a comic about giant monsters is too confusing to follow, it’s time to pick up a different comic.

Does this mean I’ll be more selective at the comic shop in future? Probably not. That’s the joy of comics — they don’t all have to succeed. Some are great and some are dopey, and some like Enormous are a beautiful mess. But few things deliver the surprises and entertainment value of sitting down for two hours with my weekly mix of comics, and I wouldn’t have it any other way.

Enormous was published by Shadowline/Image Comics in July 2012.  It is 68 oversized pages, priced at $9.99.

[…] Monsters and the Apocalypse: Enormous from Image Comics […]