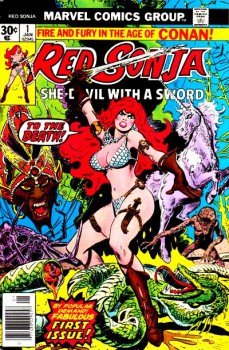 Finally, after four years of guest appearances and Marvel Feature auditioning, Red Sonja gets her very own title. And judging from the cover, it’s going to be some opening story. We’ve got a wizard, a giant snake that’s about to bite her leg (even though its head’s already been cut off and guts are spilling out of its neck stump), a giant dead spider, some little gray goblin-looking guy in the background, and a unicorn. And Sonja herself is walking past her own title banner, seemingly ready to step out of her issue, bloody sword in hand, to kill YOU. “To the death” is always a good bad-ass line for an action hero, so we’re ready to see everything on this cover that isn’t Red Sonja dead by issue’s end.

The story begins with Sonja having to kill her horse after it breaks a leg. She’s still feeling pretty bad about it a few hours later when she stumbles on a group of men with torches surrounding a horse, apparently intent on killing it. Coming closer, she realizes that they’ve cornered a unicorn. Seeing a mob abusing a “helpless proud creature” bothers her to the point that she starts cutting through a dozen men to free it. Jumping on the unicorn’s back, the two of them ride away. During the struggle, the unicorn’s horn was broken off, so that it just looks like a horse with a head injury; but Sonja’s quite happy to have the beast as her companion.

So, for those who are reading Red Sonja on a subtextual level, the woman who’s sworn a vow of de facto chastity rushes to help the mythic representation of purity only after its phallic symbol is removed. Of course, there’s no reason to read any symbolism in a naked woman and a symbolically castrated beast bathing together, sleeping together, or leaning against one another in a picaresque sunset. And there’s certainly nothing about the nervous creature growing a new horn, “even more beautiful than the other,” as it gets to know Sonja. Nor is there anything to the bitter old man inciting ignorant villagers into a fury over the unnatural union of Red Sonja and the unicorn.

Eventually, the wizard and angry mob that attacked the unicorn at the story’s beginning track it down again and decide to go after Red Sonja first. This time, it’s the unicorn that comes to the rescue, running through this month’s evil wizard with its new horn. And if there’s a more bad-ass combination of twelve-year-old boy fantasy and twelve-year-old girl fantasy than a unicorn stabbing an evil wizard with its horn, I’d like to hear it. Of course, the unicorn senses that its friendship with Sonja isn’t going to last and at the issue’s end, it wordlessly makes it clear to her that they can’t continue to travel together. There’s a sad moment between the two of them as they part ways, Red Sonja going off to kill everything else that appeared on the cover and the unicorn going off to a My Little Pony audition (Twilight Sparkle has a dark past, is all I’m saying).

This first issue has the advantage of over a dozen stories preceding it that developed the character. Writers Roy Thomas and Clara Noto (who starts co-scripting this issue) already have Red Sonja’s main character points fleshed out for both themselves and the reader; so we don’t have an awkward origin story, nor do we have those equally awkward early issues where the writers are still trying to figure out the character. Artist Frank Thorne already has a half-dozen Red Sonja stories to his credit as well, so he’s familiar with the look of the character and her world. Basically, everyone hits the ground running with this series and start off with a fairly offbeat (even by sword & sorcery standards) story. The images of our savage She-Devil With a Sword getting moony-eyed over a unicorn are wonderfully absurd, yet her loneliness is so well-established by this stage that the tears she sheds at the end are genuinely moving.

Next Issue: Fear and Loathing in Venzia, or Red Sonja’s Psychedelic Freak-Out

This articles keep getting better.

I was never a true RED SONJA fan, but you’ve made me a better man. I am now.

There’s a sad moment between the two of them as they part ways, Red Sonja going off to kill everything else that appeared on the cover and the unicorn going off to a My Little Pony audition (Twilight Sparkle has a dark past, is all I’m saying).

I’ll have to remember this when my My Little Pony obsessed preschool-age sons hit their teens.

As a Conan fan, I’ve always been fascinated how Red Sonja keeps that outfit in place while slaying bad guys.