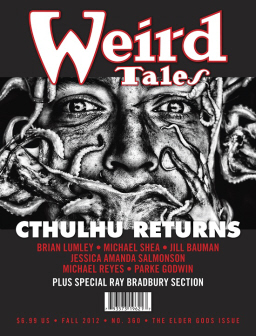 It’s an auspicious and entirely appropriate number, I think. After changing direction several times over the last few years, Weird Tales has now turned 360-degrees and returned to where it started: publishing classic weird fiction.

The theme of the first Kaye issue is “The Elder Gods,” and the table of contents makes it clear that he is whole-heartedly embracing the Lovecraftian fiction that helped make Weird Tales one of the most sought-after magazines of the pulp era:

Weird Tales 360 is $6.99 for the double-sized, 111-page print edition, $7.95 in PDF, and just $2.99 for the Kindle or e-pub editions. It is cover-dated Fall 2012, and has a special back cover dedicated to Ray Bradbury. The art for the front cover is by Danielle Tunstall; back cover artist is David Hartman. Read the complete details and order copies at the Weird Tales website.

The scariest thing in my house as a child: a WEIRD TALES comic book. Glad to hear the real thing is back (again).