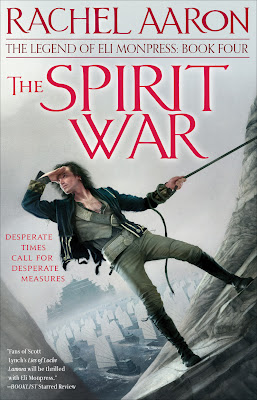 Rachel Aaron’s first novel The Spirit Thief (October, 2010) kicked off The Legend of Eli Monpress, a series that has now run to four volumes. The most recent, The Spirit War, was just released last month.

Eli Monpress is vain. He’s cocky. And he’s a thief.

But he’s a thief who has just seen his bounty topped and he’s not happy about it. The bounty topper, as it turns out, is his best friend, bodyguard, and master swordsman, Josef. Who has been keeping secrets from Eli…

Family drama aside, Eli and Josef have their hands full. The Spirit Court has been usurped by the Council of Thrones and someone calling herself the Immortal Empress is staging a massive invasion. But it’s not just politics — the Immortal Empress has a specific target in mind: Eli Monpress, the greatest thief in the world.

Here’s what our buddy John Ottinger III at Grasping for the Wind said about the first novel:

The Spirit Thief is a work of sword and sorcery that will appeal to readers of Jim C. Hines, Karen Miller, Jon Sprunk, and Piers Anthony. It is a thrill ride of a novel, delightfully amusing, based on an original magic system… I loved it.

Missed out on the first volumes? No problem. Orbit has just released all three — The Spirit Thief, The Sprit Rebellion, and The Spirit Eater — in a single handsome omnibus edition for $15 ($9.99 for the digital version). 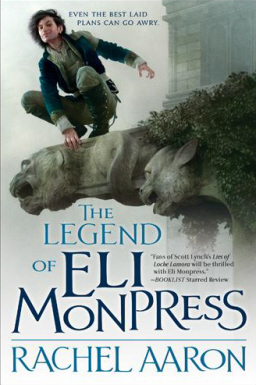 The Legend of Eli Monpress is a whopping 1040 pages in trade paperback. It’s the kind of cozy beach book that doubles as a set of free weights. And maybe even a raft. It may be the only book you need on summer vacation.

Lest I misrepresent these novels, they are not for everyone — especially if you like your fantasy realistic and grim.

The Spirit War, for example, opens with the greatest swordsman in the world talking to his sword (and the sword answering him, naturally). A young man named Josef gradually climbs to the cave at the top of a hill where the swordsman lives, there to challenge the greatest swordsman in the world to a duel. The old man sighs, breaks a branch off a nearby tree, and tells Josef  that if he can break the branch in his hand, he will agree to a duel. Then Josef is humiliated for four hours, bested at every turn by a man whose only weapon is a stick.

This is the kind of over-the-top action at the heart of these books. Eli Monpress and his bodyguard, a much-older Josef, are closer to comic-book superheroes than to Rob Roy or d’Artagnan, and the situations they find themselves in are scaled accordingly. But that’s all part of the charm.

And if you’re already familiar with the first books, you can read a sample of The Spirit War here (warning: contains spoilers for the first three volumes).

The Legend of Eli Monpress (February 2012) and The Spirit War (June 2012) are both published by Orbit. The next volume, Spirit’s End, is scheduled to appear in November.