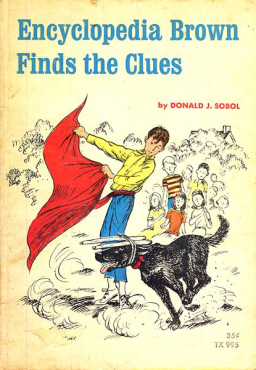 Sobol, a clerk at the New York Public Library, published Encyclopedia Brown: Boy Detective in 1963. It was the first of what eventually became 28 volumes featuring the genius boy detective.

While the book was an instant hit, and the adventures of Encyclopedia Brown entertained generations of young readers, it took dogged persistence for Sobol to get his creation in print. According to later interviews, it was rejected no less than twenty-four times before Penguin Books bought it.

Sobol’s Encyclopedia Brown books, really collections of short stories, follow the boy detective and his friends as he solved mysteries in his hometown of Idaville for “25¢ per day plus expenses.” Occasionally Encyclopedia would assist his father, the chief of police, solve more serious crimes, but usually he was matching wits with a local gang of bullies led by Bugs Meany.

Sobol wrote 50 additional books in his lifetime, including the popular Two-Minute Mysteries and Secret Agents Four. He was born in New York City in 1924 and served in World War II before becoming a clerk at the New York Public Library. The success of the Encyclopedia Brown books allowed him to move to Florida to become a full time writer.

He will be missed.

Several years ago the Onion ran an obituary for the legendary sleuth himself. Thanks, Mr. Sobol for some of my favorite elementary school reads.

Sounds like a great teacher! I’m pretty sure I discovered ENCYCLOPEDIA BROWN in the library at my elementary school, although I can’t be certain. I do remember that he made it cool to be smart, and that was refreshing.

Thanks for the link. That’s one of the better articles I’ve read at THE ONION, and that’s saying something.