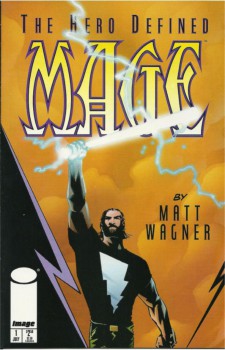 Matt Wagner began writing and illustrating the first Mage series in 1984 at the age of twenty-two.  At the time, he was a relatively unknown creator struggling both to find his voice and make a place for himself in the comics industry.  His subsequent work on Grendel and Sandman Mystery Theatre had garnered many awards and critical acclaim; but in interviews there was always the obligatory question of “When are you going back to Mage?”

When the second volume of Mage began in 1997, Mr. Wagner had earned a (deserved) reputation as both an illustrator and storyteller.  The main character of the series, Kevin Matchstick, had also been working hard in the intervening years, earning his own reputation.  The similarities between Wagner and Matchstick are both obvious and entirely intentional, to the point where Wagner has referred to Mage as a sort of mythologized autobiography.  So we can read this volume as both an examination on how mythic tropes exist in our everyday lives and as a fantasy-dressed account of Wagner’s ups and downs in the comic industry.

When I originally read this book, I was twenty-three (essentially the author’s age when the first book was published) and a lot of it was lost on me.  I identified a lot more with the jaded young man of the first volume than with the more practical and down-to-earth middle-aged man in volume two.  Fifteen years later (oops, guess I just gave away my age there), the second volume seems much richer to me.  This is the story of a hero growing up, learning that being good involves more than simply opposing evil.  It also carries some veiled criticism of the superhero genre (specifically, why most superheroes are perpetually locked in their mid- to late twenties).  The series ends with Kevin Matchstick committing an act of maturity that most superheroes would never dare (unless it was a dream or an imaginary story or eventually ret-conned).

The first book concerned Kevin refusing to acknowledge his own potential to change the world.  His friends were mostly there to inspire him (sometimes by dragging him kicking and screaming to his destiny).  In some ways, it was a young man’s fantasy, with everyone around Kevin telling him about his greatness and obligation.

In The Hero Defined, Kevin has accepted his potential and now surrounds himself with other heroes, men who have gone through similar trials and had similar insights.  It’s like the high school’s star quarterback going off to college, where everyone on the team was a star quarterback at their respective high schools and he’s no longer anything special.  Kevin begins his path towards becoming not just a hero, but a leader of heroes.  In true Kevin Matchstick fashion, he approaches this new challenge by denying his potential (again), then getting dragged kicking and screaming (again) to his new role.  Being a hero is no longer enough, just as our successes at twenty-two are simply the everyday expectations of a thirty-seven year-old.  All our great victories are merely foundation for what we accomplish tomorrow.

And the traits that make a great hero often make a terrible leader.  Kevin learns how self-confidence can degenerate into hubris.  He also learns that saving others is sometimes less noble that helping people save themselves.  And sometimes there are fights better left unfought.

Just as Kevin Matchstick is an analog for Matt Wagner, so the other characters are (often very thinly-veiled) analogs to real-life friends and fellow comics professionals who have touched Matt Wagner’s life.  His traveling companions, Kirby Hero and Joe Phatt, are based off artists Bernie Mireault and Joe Matt, who worked with Wagner on other comics.  Former Mage editor Diane Schutz and her sisters, Barbara (Matt Wagner’s wife) and Trish, appear as the weird sisters Isis, Magda, and Ishtar.  John K. Snyder, Dave Sim and Alan Moore all make appearances as well.  Both as fictional characters and as real-life comics professionals, they are all independent spirits and not terribly receptive to the idea of banding together under one leader.

Since the second series came out, Matt Wagner has had to deal with the new yet familiar question of “When are you going to finish Mage?”  The third volume, which will be subtitled “The Hero Denied” is not currently scheduled to appear any time in the foreseeable future.  As far as I know, no work has been done on it.  But I do believe it will be done.  Some day.  When Matt Wagner’s ready.

When I was younger, I probably joined with the rest of the fans in asking, pleading and even demanding that Matt Wagner finish this amazing series.  But I can see now that the work truly takes years to finish, even if most of those years aren’t spent physically drawing the pages.  The years are spent living, meeting people, learning all the things that we learn as we grow older.  Mage II is not a book that could have been written by a twenty-five year-old Matt Wagner.  Likewise, Mage III is not going to be a book that could have been written by a thirty-nine year-old Matt Wagner.  It will tell the story of an older, hopefully wiser, man.  It’s a story that has to be lived before it can be written.

I’ll be waiting for it.

A great article. I’m glad you mentioned Bernie Mireault — I first met Bernie in back in Ottawa in 1985, just after he’d published his first comic (Mackenzie Queen). He’s had artwork for every issue of Black Gate since issue 1 over 10 years ago. Bernie’s an incredible guy, and I can see why Matt would want to put him in his comics.

MAGE isn’t even the first comic to make Bernie a character… I remember clearly recognizing him in Joe Matt’s autobiographical comic PEEPSHOW in 1994. Even though Joe didn’t identify Bernie, it’s clear it was him.

Not sure why all these comic creators feel the urge to bring Bernie along with them on their adventures, but it tells you something about his character!