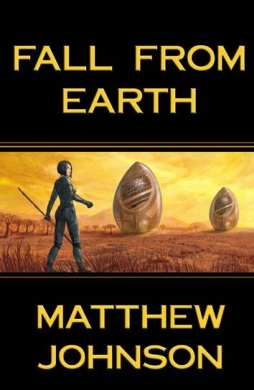 It’s been suggested that Canadian fiction often features a collective protagonist rather than a single dominant personality: a group of interlocking characters who drive the narrative forward. I don’t know how accurate that is; but it’s interesting to consider in the context of Ottawa writer Matthew Johnson’s 2010 novel, Fall From Earth. In addition to following a group of characters, it’s also a story of colonisation in the face of an unfriendly natural environment, and of the interaction of different cultures; both typically Canadian themes. Is this significant?

Fall From Earth tells the story of a group of convicts sentenced by a far-future imperial state, the Borderless Empire, to colonise a new planet. They’ve committed all manner of crimes: murder, heresy … and rebellion. We follow them as they land on the planet, and find that all is not as they had been led to expect. Complications arise and are dealt with, only for more complications to arrive; mysteries are piled upon mysteries; and the sense of scale grows as the novel goes along.

It’s a very strong book. The writing’s exceptionally tight, with no wasted words. The story’s told in short, well-chosen scenes; point-of-view shifts easily and naturally from character to character. The various conundra the colonists find on the planet develop, show strange ramifications, and then begin to resolve themselves. By the end of the book, it’s all been neatly explained, and the plot’s neatly worked through to a satisfactory ending. 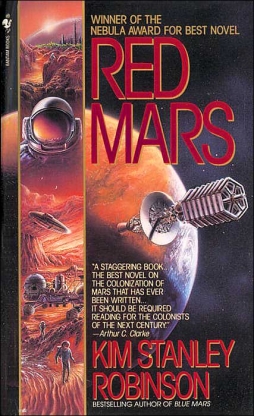 For some reason, out of all the sf books about interplanetary colonisation, the one (or three) that leap out at me as a useful point of comparison for thinking about Fall From Earth is Kim Stanley Robinson’s Mars series. In many ways, that’s not entirely fair to either author. To start with, the Mars series is vast and sprawling, where Fall From Earth is tightly-focused and gains a certain amount of impact from its streamlined, quickly-told story. It’s ruthlessly planed down, with no infodumps at all; you have to pick up details about the future setting from clues in dialogue and action. That’s a different way of thinking about story from Robinson’s entertainingly digressive saga. And while the Mars books had the process of colonisation squarely at its centre, worked out in considerable political and scientific detail, the colonisation scheme in Fall From Earth turns out to be involved with other schemes entirely. This is not a multigenerational epic, nor a how-to guide for making alien planets livable; it turns out to be space opera, approached from a surprising perspective.

Still, I can’t help but think that the books look interesting next to each other. The Mars books take the same multiple-perspective approach to their story, albeit with much longer chapters. And the sense of the colony as a creation of multiple perspectives interacting and making something new — that’s something the books have in common, though I think ultimately the books’ treatments of their similar themes and perspectives end up very different.

The Mars books seemed to me to be very explicitly American science fiction. The way Robinson wrote about his Martians, and their relationship with Earth, evoked the common American myth of American history: a successful revolution against distant political masters (albeit on the second attempt in Robinson’s novels), the development of a distinctive way of life, explosive growth, finally a return back to the motherland to help the once-mighty former power now that all’s gone wrong. All driven by technology, by scientists-as-heroes, images at the heart of both traditional science fiction and an American faith in progress. It’s well done, but seems to me to leave out some of the bleaker aspects of the American experience; what seems to be a near-utopia at the end of the third book feels oddly unearned. 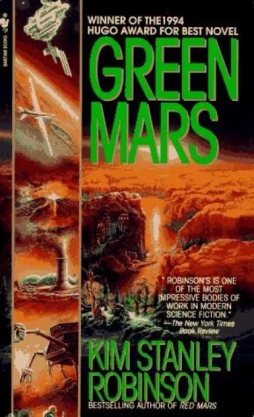 Fall From Earth, on the other hand, seems clearly written out of a Canadian perspective. The colonists aren’t particularly important to the empire that exiled them to their far-off new home. Religious conflicts among the colonists divide them. And political tensions over their heads threaten the tenuous existence of their fragile community.

I don’t want to hold Fall From Earth up to direct comparison with the Mars books. As I say, they’re different stories, told on different scales. And while I do feel, as a reader, somewhat unsympathetic to the Mars books, I still think they’re a remarkable achievement. Fall From Earth, although a very strong sf adventure, had some weaknesses. I thought the drama could be better-structured, for example. And I thought the ending, and its galaxy-shaking political repercussions, came too quickly.

Most significantly, I found it difficult to sympathise with the characters for two reasons. I thought the language didn’t vary enough from character to character in its rhythms and vocabulary; an old sage ought to think differently from a young rebel leader, for example, and that didn’t really come across for me. And I thought the characters tended to be, in a sense, too clearly-drawn. They tended to have a single central desire or motivation, and acted in the service of that motivation — as opposed to having internal conflicts or doubts, or genuinely being torn between two actions. Near the end, one character is forced to make a choice between two factions; but while it’s one of the more affecting parts of the book, there’s still really no doubt which way he’ll jump. Ultimately, I think the characters would have been more powerful if they’d been more surprising. 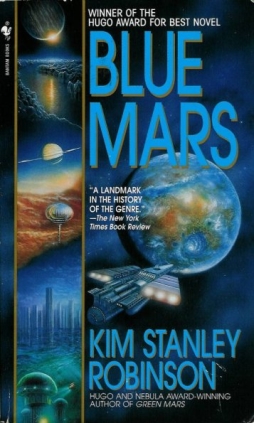 Still, the book’s quite effective, enough so that I find myself coming back to the Mars books as a useful point of comparison, differences in scale or no. At the very least, Fall From Earth seems to suggest an alternative, a different way to imagine a narrative of colonisation informed by history. If Robinson’s books are triumphalist American narratives (though self-aware ones), Johnson’s book avoids the trap of gratuitously downbeat Canadian fiction. Without wanting to give too much away, his story is about the difficult forging of a negotiated treaty, a modus vivendi between different peoples, many of them divided by religion and language, trying to reach a point of equilibrium fraught with tension, but still capable of suggesting a joint future.

Like the Mars books, this isn’t a detailed historical analogy, but a dreamlike retelling of history-as-myth-as-science fiction: an embedding of themes into a new setting, and, deliberately or not, a reflection on what aspects of national history will lead the way into the future. Technology on the one hand; deal-making, diplomacy, and compromise on the other — the acceptance, however grudging or belated, of the otherness of others. I’m not sure Johnson was consciously trying to write a take on Canadian history, but it’s certainly possible to read his book that way: different peoples learning to live with each other, to talk with each other, to accommodate each other, overshadowed by greater political entities and with a future perpetually uncertain and yet, for all that, creative and stimulating.

Either way, it’s a strong story, impressively well-crafted. I can’t help but be impressed by the concision of the book; Johnson packs a lot of narrative, and a lot of incident, into relatively few pages. And he’s able to evoke an intriguing, rich setting with minimal exposition — in fact, the richness of the setting’s effectively brought out by the avoidance of exposition, by using a hint here or a mention there to establish his future. It’s a fine adventure story, thoughtful and clever. You don’t have to be Canadian to appreciate the book. But it doesn’t hurt.