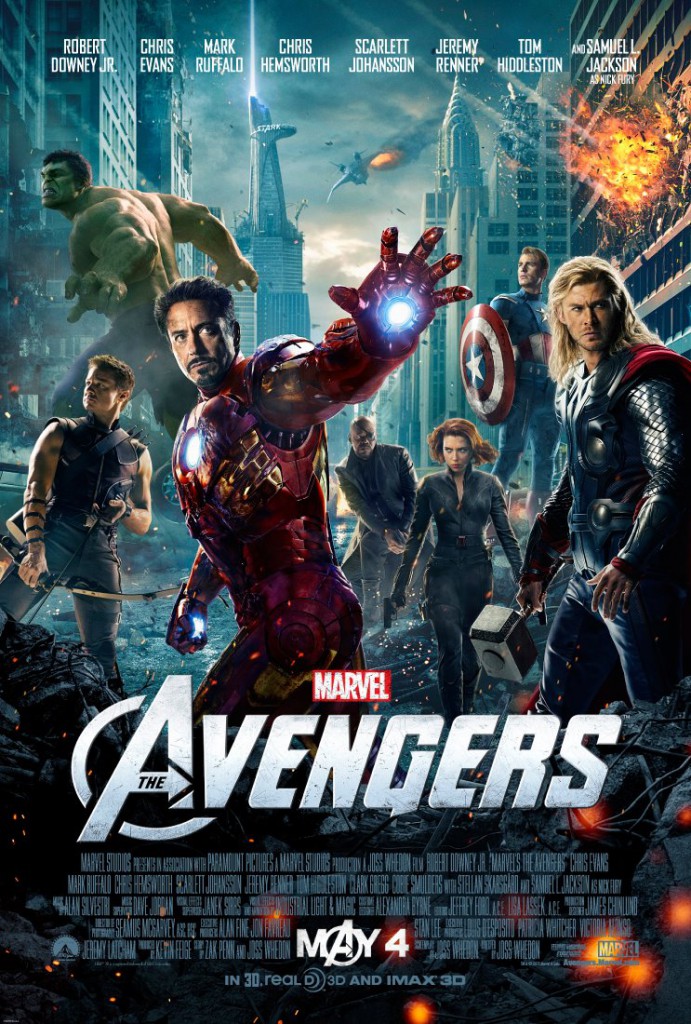 Disclaimer: This article will reference some scenes from The Avengers film. While I’ve tried to avoid specific spoilers about major twists, there are some things that give away plot elements and twists from the other Marvel Comics movies, such as Thor.

If you are a writer, be sure that you get a receipt when you go to The Avengers, because you should be claiming it as a work-related research expense on your taxes this year. (This should not be considered tax advice. Please consult with your tax preparer before making financial decisions.)

There has been no shortage of digital ink spilled gushing over how great the movie is. I’ll provide a link to some of the highlights below if you want to delve into the film itself. However, I wanted to go beyond discussing The Avengers as purely a viewing experience, but to focus on a couple of elements that writers can best take away from it.

Years ago, I attended a science fiction convention and watched a panel featuring, among others, the science fiction author Robert J. Sawyer. When discussing how to emotionally connect with readers, he mentioned his major problem with the Dune saga … that everyone in the whole universe was fundamentally humorless. Until that moment, I hadn’t realized why I disliked Dune, but this seemed to sum it up. I just genuinely couldn’t connect with any of the characters in the book.

Sawyer went on, along with the other panelists, to discuss the importance of humor. When you’re trying to emotionally connect with a reader, the easiest place to start is with humor. If you can get a reader to laugh with you, then a connection has been established. A deft writer can then use that connection to lead the writer to the other emotions that they are trying to portray.

Joss Whedon is particularly deft at using humor as a tool to create a connection to the reader … and it’s particularly needed in the projects that he works with.

Whedon’s career has been built on tackling larger-than-life, iconic characters and making them intimately real to the viewer. While the fact that he works with good actors helps, a massive amount of credit goes to the way he writes the scenes, particularly to his use of humor.

And we aren’t just talking about throw-away gags, but about humor used as a deep tool of characterization and also to heighten the serious moments in his work. I first noticed it in Angel, when this happened all the time. It was also fairly frequent in Firefly. Whedon has a very serious moment, with a character making a dramatic (usually overly-melodramatic) statement, and then, just when the tension is tightest … he undercuts everything with a moment of humor, usually humor that specifically contradicts the serious sentiment or statement that was the cause of the tension.

An Example and Analysis

The writer and editor in me saw this again and again when watching The Avengers film. Consider the following (paraphrased) exchange:

Bruce Banner: You don’t have to be psychic to smell the crazy on Loki.

Thor: You would do well to watch your tongue, human. You will speak of him with respect. He is an Asgardian and my brother. A son of Odin, the All-Father.

Thor: [beat] Well, he is adopted

Let’s think about this exchange. Whedon could have gone a lot of different ways with it, but I wager that each piece of the exchange has a meaning. In a scene where a group of heroes are discussing a new threat, it makes sense for someone to make some offensive comment about Loki’s character or mental state, given his previous actions. So Whedon goes with that … and it’s a pretty good line on its own.

However, the character of Thor is extremely honor-bound and it’s a bit unrealistic that he’d let such a comment slide. His response perfectly reflects the way he would interact, especially given that he’s had such limited experience dealing with humans. For that matter, though the timeline’s unclear, it’s probably only been a year or so since Thor was a brash hothead looking to pick a fight with anyone who might give offense. He’s spent his whole life with the idea that Loki is his brother, so is honor-bound to defend him on instinct.

Stark’s comment then negates the bravado that he just had. He remembers that, in this case, his instinct to defend Loki is misplaced … and the result is a really funny line.

This has established two important things about Thor: He’s an overly-dramatic, honor-bound warrior and, at the same time, he’s got enough humility to realize when he oversteps. (The gaining of this humility was the whole point of the Thor movie, after all.)

In essence, this one moment deftly humanizes Thor without removing anything god-like from his character.

Let Everyone Shine (Even the Bad Guy)

Exchanges like this came up over-and-over in the movie. One of the most dramatic took place between Loki and Hulk, but contained relatively little dialogue. (Listen carefully while the audience is laughing, so you don’t miss Hulk’s good follow-up line.)

So if you’re a writer, then I suggest watching The Avengers multiple times, either in the theaters or buying it when it comes out on DVD. Go once to just experience the film, but then go again and take a pad of paper and a pencil. Jot down the parts where this happens. Deconstruct them. Learn from them. Then do it yourself during revisions of your own work. Figure out a place where your characters need to be humanized and use humor to do it. You’ll be glad you did.

All of the Marvel films leading up to The Avengers have utilized humor, and have even done it to humanize their iconic characters, but in The Avengers, this was all synthesized together in ways that were more impressive than I could have imagined. The characters’ various strengths and weaknesses were played off of each other, often with the humorous undercutting that I mentioned above.

This is hard to do with a film — or a comic or novel or short story, for that matter — that has this many major characters. This was really an ensemble film and Whedon went out of his way to make sure that everyone, even the villainous Loki, had a moment to shine. Loki may actually have shined even more frequently, because he was probably in more scenes than any individual hero.

The big danger in a story with characters this powerful is that you’ll fall back on letting their power override their humanity. The characters with the most power are, all too often, the ones who get the most time. Whedon is an expert at remembering that stories must, first and foremost, be about human problems and human concerns …

At least if you’re planning to write for human audiences.

Andrew Zimmerman Jones is a writer of fiction and non-fiction. He has been a finalist in the Writers of the Future contest and received Honorable Mention in the 2011 Writer’s Digest Science Fiction/Fantasy Competition. In addition to being a contributing editor to Black Gatemagazine, Andrew is the About.com Physics Guide and author of String Theory For Dummies. You can follow his exploits on Facebook, Twitter, and even Google+.

Okay, I know the scene of which you speak (just got back from the movie) and yes, I and everyone else were laughing so hard (I could barely catch my breath, it was so unexpectedly, outrageously funny) that we missed Hulk’s line when he’d “finished”.

Please … for the love of all that is Marvel, please tell me what Hulk said.

An email will do, if that is better.

The movie was great, and the writing was too. I’d highly recommend it, and I only go to the big screen for “big” event movies like this one (and John Carter!! Kaor!!)

Anyway, I definately feeel I got my money’s worth, and then some.

Never mind! Found it in one the links.

I was sliding by on not really caring if I saw this movie or not, and then all of a sudden, I read this article.

Ah, well. Now I must scrounge for some movie money…

[…] right to be, and I agree with Andrew Zimmerman Jones’ when he says aspiring writers should bring a notebook. Everyone who wants to learn about storytelling should watch this […]

Sweet thoughts Andrew, I enjoy your breakdown and recommendations. Other than one ‘Howd’d he know that moment?’ the writing was yet another spectacular part of this very well-done movie. I taught group leadership to a room full of law enforcement people today, and readily pulled examples fresh from my viewing last night.

Unfortunately no one else in the room had seen the movie (yet–there were a few who intend to), but the cavalier ‘Field Trip!’ suggested by one member really wasn’t a bad idea. Not only are there many writing tips to be had from it, there is much to be learned about group dynamics, composition, norms, cohesion, and development.

[…] the film came out in theaters back in May, I wrote an article “What Writers Can Learn From Joss Whedon’s The Avengers.” All of those points are still valid and if you haven’t seen the film, the writing is […]