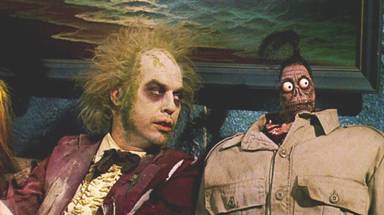 Okay, so maybe Hollywood is seeing the lowest ticket sales in their collective history and perhaps that has caused a lack of story-line creativity.

However, if we’re going to need to sit through some things more than once, at least money-guys know what keeps us coming back.

This is a fine example.

Today I am as thrilled as I ever get to report that after more than a 20-year hiatus, one of my favorite characters (and Goth Chick dream date) Beetlejuice is finally returning to the big screen. 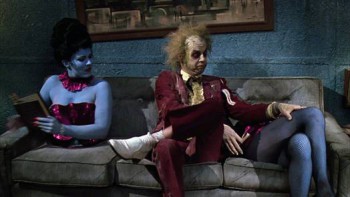 Warner Brothers has secured the writing talents of Seth Grahame-Smith; who will be getting right to it now that the screenplays for Dark Shadows and Abraham Lincoln: Vampire Hunter (which Tim Burton is directing and producing respectively) are in the can.

When asked if he’d direct a Beetlejuice sequel, Tim Burton had this to say:

Yes. I love that character, and Michael Keaton is so great in it. I always think about how great and fun that character was, so I just said to [Dark Shadows writer] Seth Grahame-Smith, ‘If you have some ideas about it, go for it, and then I’ll look at it freshly.’ In the past, I tried some things, but that was way back when. He seemed really excited about it.

“The past” that Burton is referencing is the semi-infamous Bettlejuice Goes Hawaiian that was planned in the early 1990’s, with Jonathan Gems (Mars Attacks!) penning the script.

For better or worse (mostly better, from what I’ve heard), that project never materialized.

The only major Beetlejuice spinoff that has been produced to date is the Burton-created animated series, which ran from 1989-91.

The passage of time hasn’t seemed to dampen the enthusiasm of star Michael Keaton either, who indicated he’s as ready as ever to return to the title role.  At a press junket for Toy Story 3 back in 2010, the then-58-year-old actor told Moviehole:

Oh I’d do that in a heartbeat… that’s the one thing I’d love to do again!

Geena Davis seems warm to the idea of doing a follow-up as well, but brought up an interesting point,

Thing is, do ghosts age? Wouldn’t we be stuck in the age we were?  Alec [Baldwin] and I would have to look as we did then – who knows, maybe we could?  I better get in touch with Tim Burton.

Good question, in which case I’d suggest getting personal trainers on the phone first.

Okay, that was mean, I admit it.

But one thing that seems pretty certain is this new Beetlejuice will not be a remake.  The story is said to carry on from the original which means everyone except Michael Keaton could be out.

The production schedule has yet to be announced but you can bet I’ll be keeping an eye on this one for you.

So what do you think?  Long awaited sequel to an awesome original, or more proof there is no originality left in Hollywood?  Post a comment or drop a note to Sue@blackgate.com.

As long as Danny Elfman does the score, I’ll watch it no matter what else they do.

I did a little poking around but no word on whether Danny Elfman is up for a Beetlejuice sequel; however it is a tad early for soundtrack consideration.

Still, it stands to reason that if Tim Burton is game, Elfman would follow.