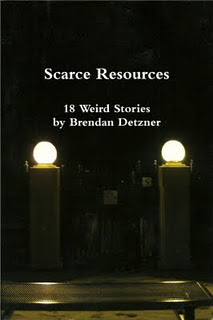 Brendan Detzner has been reading his stories of unholy compromise, quiet madness and apocalypses both great and small at Chicago open mic events for several years now. His first collection, Scarce Resources, is now available. If you’re not familiar with his work, these eighteen stories are a great overview of what he’s been doing.

The collection opens with “The Black Plague,” a mixture of bio-terror and supernatural horror that shows how much more fearsome life-and-death decisions are when placed in human hands than when left to the whims of nature.

“Dinosaurs,” “Dress Rehearsal” and “Humility” are also set in post-apocalyptic worlds where the drive to continue and rebuild society is either an act of ultimate hope or ultimate denial. I especially liked the playful tone of “Dinosaurs” (opening on a tennis match with the Devil), while “Dress Rehearsal” is reminiscent of Philip K. Dick.

“Music for Scalpel and Prepared Piano,” the shortest piece in the collection, illustrates in less than a hundred words how the path of evil can so easily become a slippery slope. “Quiet” deals with a similar theme, except that the atrocities he describes are sadly real (and still being funded by your tax dollars).

Given the recent death of Amy Winehouse, “The House Rock and Roll Built” may seem a bit more timely than originally intended, while “Veronica” portrays a brutal woman living in a brutal world, finding humanity in a bit of nostalgia.

Standard horror tropes are given a fresh perspective in several pieces. “A Black Hole in Chicago” is a zombie story only so far as it tells of a world where the dead don’t leave us, stripping out all of the elements that a thousand other writers have plagiarized from George Romero. What’s left is a brutal, yet endearing story about the emotional bonds that don’t die, even when the people they connect should.

“Ducks” follows the standard bad-people-get-theirs trope; but there’s an inviting style to it and a beautifully creepy and understated closing line. “Lake Sympathy” delves very loosely into Lovecraftian territory, maintaining Lovecraft’s nightmarish perspective of cosmic indifference without getting bogged down in the usual name-dropping that often ruins such stories. One of the great tricks of “Iowa Highway” is taking the crazies luring victims off the road theme and showing how nightmarish the motorists’ lives were before the story began.

Peppered throughout the collection are also stories that mix humor with horror (often the trickiest of mixes). “The Invasion” and “Mario and Luigi and the Lords of the Sky” both have premises that sound comic on the surface; but cut to some very primal fears. On the flip side, “Super Jesus” has maybe the oldest of horror themes, the slow descent into madness, played for maximum splatter comedy effect.

“Red Rover” and “Rolling Bones” are more surreal pieces and serve to unsettle the reader by simple virtue of not clearly explaining what is happening to the protagonists. Horrors that cannot be easily understood cannot be easily fought.

The collection wraps up with “Another Saturday Night,” exploring one of my favorite horror themes: Why do people find another man’s misery so entertaining? Given the stories leading up to it, an apt question.

A number of Detzner’s stories have been published in small press magazines and anthologies, but unfortunately, many of these have gone out of print and finding copies is difficult. You’re simply not going to find this much of his work anywhere else.

You can read several of his stories for free on his web site and pick up a copy of his collection through Lulu. Check it out.

[…] in 2011. His first blog post for us was a review of Brendan Detzner’s short story collection Scarce Resources in November of 2011; in the last few months he’s reviewed Matt Wagner’s Mage: The Hero […]