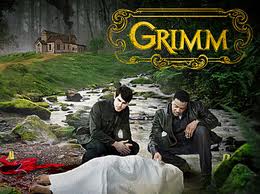 As I mentioned last week, there are two major series starting this fall that are based on fairy tales coming to our world. The second of those series is NBC’s Grimm, which comes across as an attempt to wed fairy tales to a police procedural, sort of like Supernatural merged with Criminal Minds.

The result is a particularly brutal program, leaning strongly toward the horror end of the spectrum. I’m not sure if something this dark will really make it as a success on NBC. Supernatural is a cult success, which is fine for the sort of ratings that the CW is aiming for, but NBC would consider the same ratings level a failure.

The concept: Nick Burckhardt is a police detective who begins to see strange visions, only to learn that it’s because he is descended from a family line of Grimms – those with the power to see supernatural creatures for what they really are. It’s his destiny to hunt down these creatures.

The plot: A horribly brutalized dead body is found, then a little girl goes missing. Meanwhile, Nick’s aunt shows up and tells him about his family’s heritage and that his parents were murdered, instead of the accidental death he’d always been told. Nick thinks he has the culprit, a loner guy who seems to turn into a wolfman (a blutbad, they’re called) to Nick’s new supernatural sense, but it turns out that this guy is a reformed blutbad and isn’t the one he’s after. Together, they go and find the creature that has abducted the girl, but the blutbad can’t trust himself to not lose control when he gets too close to the other one. (Bad things happen when they get in packs.) Nick calls in his partner and, without telling him the details, they’re able to rescue the girl.

Really, the pilot of Grimm couldn’t have been more different from the Once Upon a Time pilot. Grimm was entirely set in the here-and-now, focusing on a plotline rather than a bunch of backstory. The details on what exactly is going on are still very vague, but the pilot definitely gave a sense of what to expect from future episodes.

The problem is that Grimm didn’t just set up a premise, it set up a formula. I fully expect that every week Nick will encounter some sort of villainous fairy tale creature and will dispatch it by the end of the episode. This premise certainly has worked well for shows in the past (Buffy and Supernatural both come to mind), but the success of those shows relies on the larger story arc that gets woven through the formulaic premise. With the exception of Chuck – a series that is continually on the bubble of being canceled – NBC has never been particularly good at weaving an enthralling greater mythology into a formulaic premise. (Consider how they squandered, over and over, the possibilities in Heroes.)

In contrast, Once Upon a Time suffered from trying to shove too much backstory detail into the pilot, at the expense of a weak present-day storyline. I really don’t know what to expect from the second episode. For example, will there be Lost-like time jumps between the present day and the past in every episode, or was that something used for the pilot and from here on out things will mostly be set in the present? Will the characters realize what’s happening quickly or slowly? Will each episode end in a cliffhanger, or will plotlines get resolved?

Overall, though, I have to say that I liked Once Upon a Time a bit more than Grimm. Don’t get me wrong: Grimm was certainly not bad, and I’ve seen far worse pilots that have led into phenomenal shows. (Again, Buffy: The Vampire Slayer comes to mind.) I just think the flexibility of Once Upon a Time has more potential. It is predicated entirely upon breaking the fairy tale mold (or, rather, the fairy tale mold has already been broken) whereas the clear formula that I saw in the Grimm pilot didn’t make me think that they’ll be breaking molds anytime soon (although there was one plot twist, revealed at the very end of the episode, which I did not see coming and which definitely points toward a far grander story arc than episodic monster hunting).

Both series have potential, and they’re different enough that I don’t think it’ll necessarily be an “either/or” choice between them. Both could get audiences without stealing from the other. It’ll all depend on how well they weave the modern-day stories together with a compelling mythical conflict.