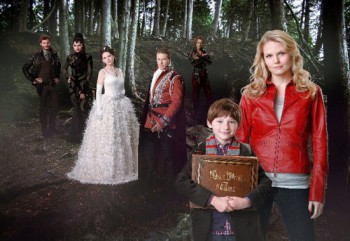 There are two series starting this season which are trying to leverage the world of classic fairy tales to gain ratings on major networks. Though existing fantasy series, like Supernatural, Sanctuary, and Warehouse 13, do often touch on the idea of fairy tales (or mythical creatures, at the very least), a series fully embedded in the classic fairy tales is something I don’t think we’ve really seen before.

The first show, which premiered on Sunday night, was ABC’s Once Upon a Time. In this story, the characters from the classic fairy tales are trapped in our modern world, in Storybrooke main, without even the memory of their lost identities. The story centers around an outsider, Emma Swann, who comes into the town … only to discover that she’s not as much of an outsider as she thought.

The next one, Grimm – which premiers this upcoming Friday – takes a different tactic. In it, the main character is part of a line of monster hunters who have the innate ability to see fairy tale monsters for what they truly are.

It remains to be seen which of these series will have staying power.

(Note: The Slice of SciFi blog counts CW’s The Secret Circle among this group, in their post “Which Fairy Tale Series Will Succeed?” I don’t think this is quite on the mark, though I haven’t actually watched The Secret Circle yet. None of the promos that I’ve seen for that series have pushed the “fairy tale” angle much. It seems to be a fairly straightforward “guess what, you’re a witch” storyline, sort of a Charmed meets Harry Potter, with a Twilight or The Vampire Diaries feel thrown in.)

Once Upon a Time starts in the fairy tale world, with a fairly straightforward depiction of Snow White’s resurrection by Prince Charming’s kiss. Things begin to go wrong at the wedding, when the wicked queen (or, rather, ex-queen) shows up and declares that this will be their last good day, because she’s going to ruin everything.

In the modern day, a kid takes the bus into Boston, clutching a book of fairy tales. Turns out that he’s looking for his birth mother, bail bondsperson Emma Swann (Jennifer Morrison). Emma, it seems, has no family … nor does she particularly want one. It’s her birthday (her 28th, as it turns out) and, after taking down one of her bail jumpers, she is celebrating it alone, until the kid – Henry – shows up. He says she has to take him back home to Storybrooke, Maine, because the stories are real. Not only that, but she’s one of the characters in the book.

The remainder of the episode jumps between the fairy tale world and the modern one. In the fairy tale world, a pregnant Snow White (Ginnifer Goodwin) gets concerned about how the queen will move against her. She finds out from Rumpelstiltskin (Robert Carlyle) what the queen is planning and how to stop it. The queen is going to capture them all in a prison, one in which time will stand still for all eternity. However, if they can protect Snow White’s child and get it to safety, then on its 28th birthday, the child will return and the final battle will begin.

In exchange, Rumpelstiltskin asks for payment in the form of the child’s name: Emma.

Geppetto fashions a wardrobe out of a magical tree, which can keep one person safe from the curse. Unfortunately, Snow White goes into labor before she can hide there, just as the queen is casting the curse. With a dark cloud sweeping across the land, Prince Charming is able to get baby Emma to the wardrobe and place her in there, right before getting run through by the queen’s soldiers. (This scene brought a tear to my wife’s eye.) When the soldiers open the wardrobe, they find no baby.

In the present day, Henry gets Emma to drive him back to Storybrooke. She drops him off at his home, and it turns out that his adopted mother is the town’s mayor (Lana Parrilla), the real-world variation of the evil queen. With Henry safely home, Emma heads out of town, but a wolf startles her into having a car accident. She awakens (in jail) to discover that Henry has run away again, but luckily she has skills at tracking people down. After meeting his teacher (Snow White it is), she fairly quickly gets him back home, at which point his mother threatens to destroy her if she doesn’t get out of town.

As you may be able to tell, the big problem with this pilot is that the present-day storyline doesn’t have any teeth to it. If the show is going to persist, they’re going to have to make the challenges in the present as compelling as whatever fairy tale is at the heart of the episode. Episodes with a compelling fairy tale and a superficial modern-day plotline won’t capture a strong audience.

Still, I can’t fault them for this approach to the pilot. They had a fairly complex storyline to set up in one hour, so they couldn’t really devote a lot of time to developing something complex in the present. Ideally, this would have been a 2-hour pilot.

In addition to making the present-day plotline more relevant, I think it will also be very easy for them to slack up on the characterization. I mean, one of the main characters is Snow White and the other is the Evil Queen. There’s Rumpelstiltskin and Jiminy Cricket. Where is the room for nuanced motivations within these characters? (Actually, I suppose that Jiminy Cricket could have a lot of potential.)

There are some compelling breadcrumbs dropped in the last few minutes of the episode, though, which make me think that the series has some good potential. Prince Charming is in a coma. The town is owned by Mr. Gold, who is Rumpelstiltskin’s incarnation in this world. And the town’s clock, which never moves, begins to move.

If you missed the airing of the pilot, it looks like free episodes will be streaming on both ABC.com and Hulu.com.

I appreciate the review. I’m getting ready to watch this pilot tonight, we recorded it on the DVR last night, and it’s nice to get a critical overview.

Sounds to me (reads to me?) that the show is suffering from Pilotitis, but not necessarily an overly disadvantaging one.

[…] I mentioned last week, there are two major series starting this fall that are based on fairy tales coming to our world. […]