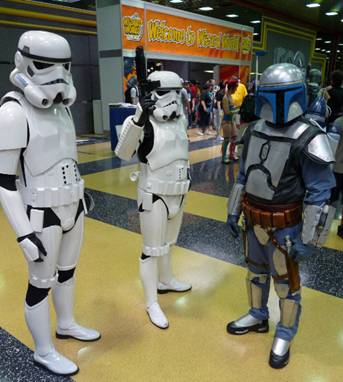 Bicyclists along the lake front, street festivals, the Navy Pier Ferris Wheel… and so many guys dressed like storm troopers you can’t spit a piece of gum without hitting one.

It’s once again Comic-Con time in the city.

Each year, following the bacchanalia in San Diego in July, the less manic, more edgy and far more spandex-laden version makes its way to my favorite city and thanks to my Black Gate creds, I get VIP access every August. The big Hollywood bunny-huggers in California can keep their con. Give me the artsier, indy-er and far more laid back Midwest version where you can still hobnob with the entertainment industry; but instead of seeing them from behind black draped partitions, you walk right up, shake hands and have a chat.

A better afternoon you couldn’t hope to spend.

In the coming weeks it will be my distinct pleasure to bring you in-depth looks at some of my absolute favorite finds from the 2011 show. But being one of those “open at least one present on Christmas Eve” kind of girls, I couldn’t wait for the interviews to start taking shape. 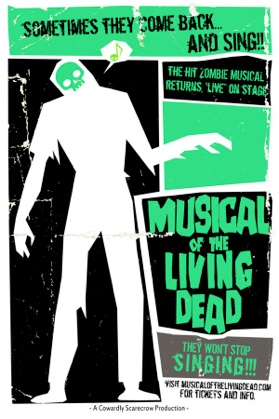 Musical of the Living Dead

The title alone should say it all, but it doesn’t; not by a long shot.

With the tag line, “Sometimes They Come Back…And Sing!” Musical of the Living Dead wins this year’s coveted Five Bat Award for leaving me speechless with awe.

I mean really? Who does such a thing, mixing blood and gore and tap dancing?

Apparently Marc and Brad do, and the entire masterpiece was conceptualized after a night of heavy drinking.

Clearly it also takes a whole lot of creativity as well, because if alcohol was the only necessary element, this office would be full of Emmy Awards.

Check out some clips on YouTube here and watch for more information in October, when I’m front and center for the second season’s opening night.

We here at Black Gate love discovering new soon-to-be-literary-powerhouses like Jeremy Jaynes, mainly because someday when they are famous, they may mention us in an award speech.

And how can you do anything but admire a guy who works in the legal department of an insurance company by day, but still manages to not have his soul sucked out and follow his life’s ambition of being an author; and a good one at that? 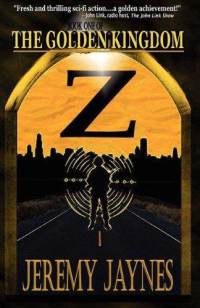 The Golden Kingdom: Z has been out for less than a year and already has garnered quite a cult following. Jaynes tells us a story about enormous, golden domes appearing on every major continent leaving humanity to cower from the nightmares they unleash.

How will America respond in the face of something less than total destruction, and how far would you go to save the world?

Part sci-fi, part horror GKZ is the first in what Jaynes plans to be a trilogy,

Read an excerpt here then pick it up at Amazon.com

Have you ever met someone who rubbed you entirely the wrong way, but much like a road accident, you just couldn’t stop looking in spite of yourself?

The second thing I noticed was a book display for a publication called Creepy Susie and Thirteen Other Tragic Tales of Troubled Children by Angus Oblong.

Ok, my interest is piqued.

Next to that are several anthologies of Angus’ collected works which I casually flipped through and found myself, um… laughing out loud. 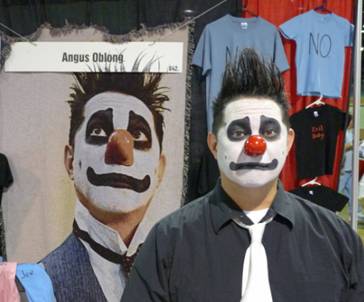 Well, I shouldn’t say “never” because I have laughed out loud at a book twice before; once when I first read Hitchhikers Guide to the Galaxy and once when I read Good Omens. But still, this is an extremely rare phenomenon.

Deciding I needed to know more about Angus Oblong, I caught his eye and introduced myself. I explained that I never (well almost never) laugh out loud at a book, and would he mind answering a few questions for Black Gate magazine?

“You mean you want to interview me for a magazine called Blackgay?”

Ok, I get it… Angus’ creepy clown persona is as much of an a** as he is a talented artist.

But not before sending my trusty photographer sidekick back to his booth to buy the book of Random Drawings.

I sure as heck wasn’t going to cop to it, but after all, it’s only the third time I ever laughed out loud.

Judge for yourself here. 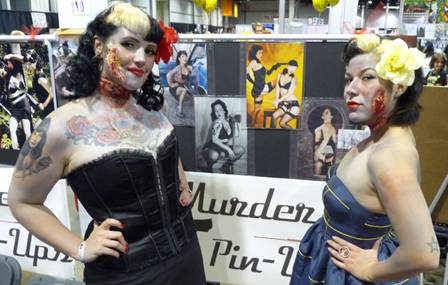 Yes, you read that right; i.e. World War II pin-up girls pretending to kill each other.

It’s edgy, sexy and a little disturbing but totally unique art that would rank as one of those things that make people go “Hmmm?” when they see it hanging on your wall.

The ladies tell me a calendar is in the works but the really fun fact is that they’ll tart you up as a Murder Pin-Up (or just a plain pin-up if you’ve got kids you don’t want to frighten) and sit you down for your very own photo-shoot; hair, makeup, costume and props included.

Check the girls out here.

I’ve already decided a sitting is going first on my Christmas list. 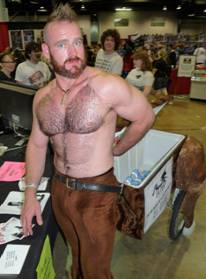 I got drawn to the Unicorn City booth by following a guy dressed like a centaur, whose backside was a cooler full of bottled water.

Be real, you’d have followed him too.

The premise of the movie is pretty ingenious. The main character “Voss” is a selfish gamer who is currently unemployed and looking for work.

He convinces his gaming guild to move out into the mountains where they will set up a utopia.

He tells the gamers that Unicorn City is a place where they will live out their characters while Voss builds up his management creds. Unicorn City begins to grow as gamers show up from all around.

Things are looking up until the villainous “Shadow Hawk” appears to snatch Voss’ utopia (and future job potential) from beneath him. 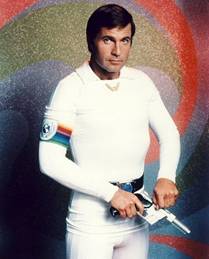 If you ever wondered what the world would be like if all your local gamers suddenly lost every ounce of inhibition, then you’ll love Unicorn City.

Brian and Adrian are submitting Unicorn City to several festivals, i.e., Sundance, Slamdance, South by Southwest, and Toronto and are hoping it will be purchased by a major studio who will release the film theatrically.

I’m certainly hoping that too.

Check out their website here to learn more and watch the hilarious trailer.

And finally, there was my own, personal geek moment which I’m afraid to tell you, far outweighed even the pudgiest of storm troopers.

If you surf around the SciFi Channel you may have the good fortune of coming across episodes of wonderful little space adventure from the early 80’s called Buck Rogers in the 25th Century.

Painfully campy though it is, the production values were high and the stars were gorgeous, decked out in take-no-prisoners white spandex.

“Buck” was a 20th century astronaut whose spaceship suffered a freak accident propelling him forward in time to the 25th century. Here, good ol’ American street smarts is a fine match for the futuristic dilemmas he gets into.


The series starred hunky Gil Gerard. Though Buck Rogers only lasted three seasons, Gerard went on to an illustrious television career including a stint on Star Trek New Voyages and in currently filming the revival Buck Rogers Begins.

Well, Gil Gerard was one of the celebrity guests at the Comic Con. Even 30 years later he’s still a hunk and consequentially, I blabbered some nonsense while he graciously signed a picture for me.Even goth chicks can lose it once in awhile.

Wizard World Comic Cons continue to happen all over the US in the coming months. Click here for a schedule of future events.

Have you gone to one in the past? If so, what was your geek moment? Post a comment or drop me an email at sue@blackgate.com.

[…] discussed last week I had the distinct pleasure of covering the Chicago Comic-Con for Black Gate earlier this month. […]