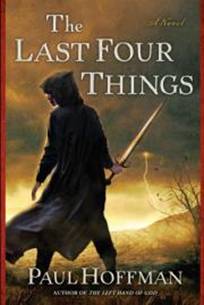 The options for your summer reading list are as copious as the Speedo bathing suits which have suddenly appeared on the rooftop sun deck of the Black Gate offices, but not nearly as difficult to speak about.

A couple weeks back I told you about Robert Browne’s The Paradise Prophesy, which hit store shelves on July 21st. This week British author Paul Hoffman brings us the second in The Left Hand of God trilogy, entitled The Last Four Things.

Hoffman’s first book set off a worldwide bidding frenzy among US publishers in 2008. The Left Hand of God (aka The Angel of Death) follows the story of Thomas Cale, a teenager imprisoned in The Sanctuary, a brutal institution that trains boys to become warriors, known as “Redeemers” in an imminent holy war.

Though the trilogy is set in an intriguingly ambiguous medieval realm with modern overtones, this isn’t entirely a fantasy world; much of it is based on Hoffman’s own experiences growing up in an extremist Catholic boarding school. 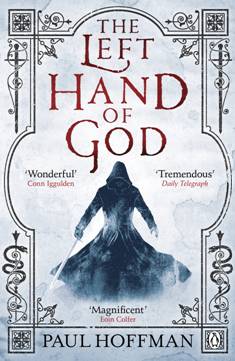 In The Last Four Things Hoffman picks up the story of warrior-monk Thomas Cale as the leader of his order informs Cale of his intention is to use him as a means to install himself as Pope.

This would enable “Redeemer General” Bosco to fulfill his life-long crusade to redeem the world by purging it of God’s greatest mistake; the wickedness of mankind.

With the fervor of a fanatic and demonstrating a lethal range of ruthlessness, Bosco uses the great Redeemer propaganda machine to set Cale up as more than a mere monk. He is to be the destroyer; the embodiment of God’s Wrath.

Cale seemingly accepts his role in the ending of the world: fate has after all, has turned him into the Angel of Death.

But perhaps not even the grim power that the Redeemers hold over Cale is enough to bend him to their will. When it comes time to decide the fate of the world will he really choose the extermination of mankind?

If you’d rather your fantasy reads to be devoid of fairies and unicorns, and instead prefer brutal politicking, inventive acts of human cruelty and a whirl of skirmishes, assassinations, massacres and battles then The Last Four Things will be just your cup of tea. 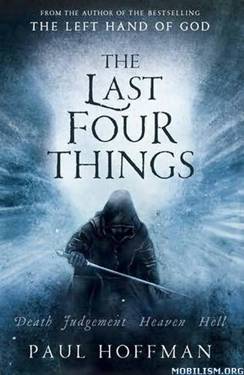 Hoffman’s characters are anything but stereotypical and filled with a level of dry wit that makes them grab your attention with the startling violence of a road accident.

He also seems to have great fun in naming various characters such as Redeemer Yes of the Office of the Holy Spirit, formerly known as the Office of Celibacy, the Mother Inferior, and The Laconics.

This is blood-soak romp that took some getting used to, especially as I came in at book two.

However, Hoffman has me hooked and I’ll be starting on The Left Hand of God this weekend. I’m now sort of obsessed with finding out what happens to Thomas Cale.

Much like I am for movie trailers, I’m a sucker for the commercials that publishers have started creating for their new releases. You can watch the one for The Left Hand of God trilogy here.

Makes me ponder the idea that Cale may be headed for the big screen before too long. After all, we haven’t seen a pseudo-Catholic horror film since Priest.

And now, a moment of silence in memory of Borders Bookstore. 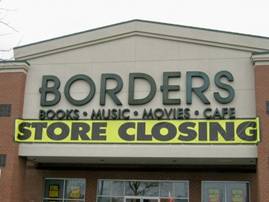 Technology geek that I am, I still maintain the digital photography lacks the colorful depth of film, no graphics-embellished email will ever replace a hand-written note, and even though my tablet will hold over 500 titles, it will never, ever replace the feel of a really good book in my hands.

Like many of you, I spent an uncountable number of rainy (or snowy) Sunday afternoons slouched in one of their comfy chairs or sitting cross-legged in the aisles discovering tales I somehow had missed, or thumbing through new releases.

We left hefty bits of our paychecks behind as well; me and you and the rest of us who, like Hermione, find the smell of parchment seductively intoxicating.

Even though Borders will soon be gone forever, I hope you will join me in finding another local book seller to patronize. “Losing yourself in a good e-book” just doesn’t have the same ring to it.