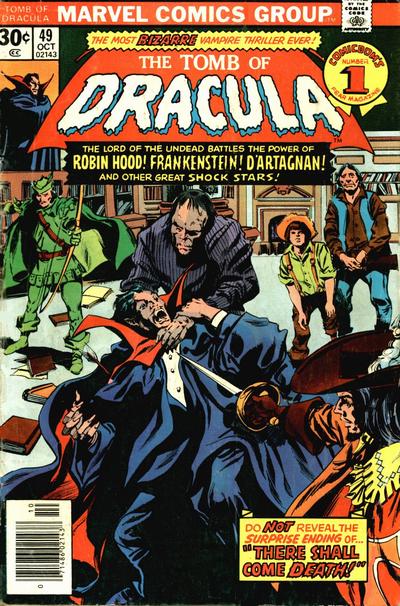 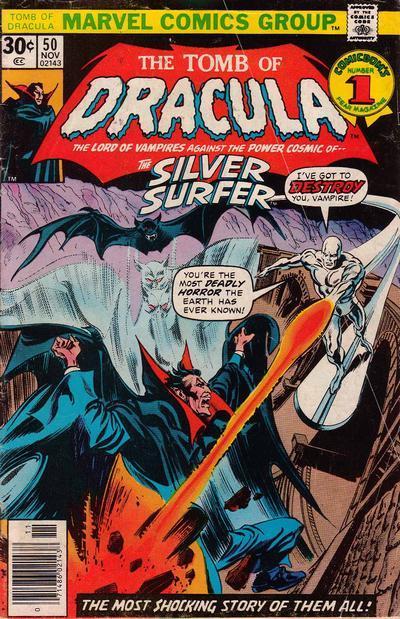 The Tomb of Dracula #49, “And With the Word There Shall Come Death” is an intriguing issue which nicely develops Anton Lupeski’s ambition to see the Church of Satan grow into a cult that could become a One World government. Of course, Lupeski sees Dracula as both his means of achieving this goal and an obstacle to remove before he vampire is firmly entrenched as the head of the church. Dracula returns home to his pregnant wife, Domini, but is almost immediately mystically spirited away to another dimension. The subplot with Blade and Hannibal King battling Blade’s vampire doppelganger ends with Blade disappearing into his undead twin leaving only the vampire Blade to confront King. Meantime, Frank Drake and Harold H. Harold are captured by Lupeski’s followers when they infiltrate a Black Mass. Rachel Van Helsing is seen about to attempt their rescue while Dracula materializes in the library of a woman named Angie Turner who possesses the apparent ability to summon literary figures to life from her library. The vampire lord finds himself encountering the likes of the Frankenstein Monster, Zorro, D’artagnan, and Tom Sawyer. Dracula is confused as to the nature of Angie’s powers. When she burns Bram Stoker’s novel, the real Dracula is returned home to Domini and the reader learns that Angie Turner is a mental patient locked in a padded cell in a nice twist ending worthy of Rod Serling or Richard Matheson at their peak. Marv Wolfman’s concept of comic book/literary reality vs. the real world the reader escapes from raises what would otherwise be considered mere filler to genuine delight.

#50, “Where Soars the Silver Surfer” is yet another crossover with a more mainstream Marvel character. The interconnected Marvel Universe concept is one I always enjoyed, but felt it never really worked outside of superhero books. Happily, Dracula’s meeting with the Silver Surfer comes off more satisfying than expected. The story gets off to a strong start with a predatory Dracula scared off by an angry crowd who come to his helpless victim’s rescue. We then switch to Anton Lupeski explaining to four unseen guests his plan to kill Dracula once Domini gives birth to his heir. From there we switch scenes to the ongoing fight between Blade’s vampire doppelganger and Hannibal King and then we view Lupeski and his four unseen cohorts performing an occult ritual to summon the Silver Surfer to their dimension. Dracula is finding life as head of the Church of Satan to be frustrating. Writer Marv Wolfman does well in portraying Satanists as regular folk and high-ranking politicians and not just stereotypical occultists. The ongoing subplot involving the portrait of Christ in the deconsecrated church is developed further. The Surfer enters and exits through the portrait as a portal between dimensions and understands that Christ has a plan for Dracula that involves both Domini and their unborn child. The decision to have the mystical Surfer possess an understanding of Christ is as effective as the suggestion that both the Church of Satan and God are using the Surfer for the same purpose. Wolfman was walking a tightrope in these portrayals and offended more than a few readers along the way. Ultimately, it is up to the individual to decide whether his bold experiment worked or failed, but I found his integration of mainstream religion with supernatural fiction to be a highly effective one that harkened back successfully to the vampire’s literary roots in Stoker’s Victorian classic. 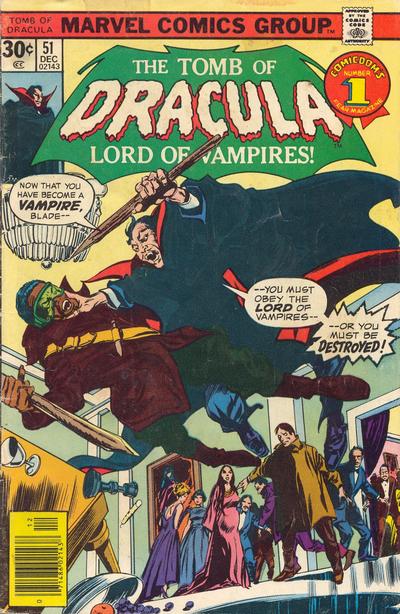 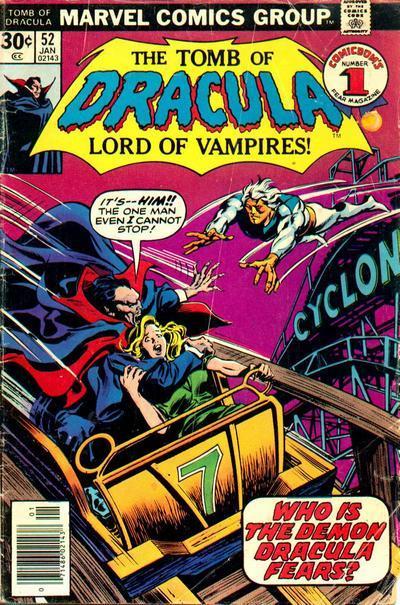 #51, “The Wildest Party” gets off with an action-packed start with Dracula returning to his deconsecrated church and finding Lupeski has captured Frank and Harold with Rachel, armed with her crossbow, attempting their rescue. Rachel and her friends make good their escape while Dracula is more aware than ever that Lupeski is plotting to betray him. Rachel, Frank, and Harold discover Quincy after a near-fatal heart attack and the old man is rushed off in an ambulance. Meantime, Dracula and Domini attend a ritzy fundraiser for the Church of Satan alongside a tuxedoed Lupeski (who doesn’t exactly clean up well, but he tries). Gene Colan’s artwork perfectly captures the power-mad degenerate who is using the occult to dupe others. Frank and Rachel reconcile at the hospital while waiting to see if Quincy pulls through. Blade and Hannibal King’s fight moves to the site of the fundraiser where King spots Deacon Frost and pursues him while Dracula and Blade engage in a vicious battle that ends in the vampire Blade’s death when Dracula drives a stake through his heart.

#52, “Demons in the Mind” starts off with Blade’s funeral attended by Frank, Rachel, Harold, and a grieving Safron. Meantime, Wolfman finally expands on the mysterious shadowy figure that we learn has haunted Dracula through the centuries (courtesy of historical flashbacks that build upon the vampire’s existing back-story). Their issue-length confrontation begins in a revival theater where Dracula is attending a screening of a black & white Dracula movie starring the Lugosi-like Louis Belski. Dracula assumes the spectral presence that has haunted him through the ages is a demon sent by Satan. It is only in the stinging conclusion that Dracula realizes his undefeatable assailant is actually an angel. The issue ends with the vampire raging impotently in front of the portrait of Christ that he is unable to remove from his church. 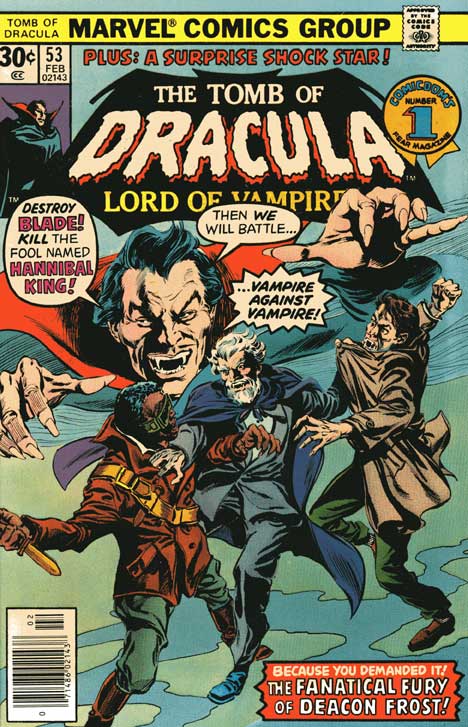 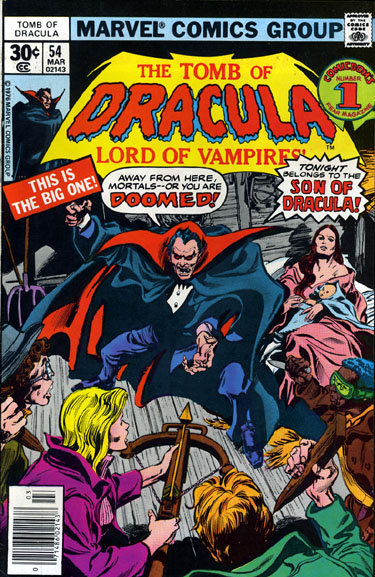 #53, “The Final Glory of Deacon Frost” opens with Hannibal King exhuming Blade with the help of Marvel’s resident Exorcist, Daimon Hellstrom, the rebellious Son of Satan who fights against his unearthly father. The stake is removed from Blade’s heart which resurrects the vampire. Hellstrom uses his mystic soul-fire powers to separate the human Blade from his vampire twin. The vampire is permanently dispatched leaving the human Blade alive and well and freed from his banishment. Dracula is eagerly awaiting the birth of his child while Blade has a brief but tearful reunion with Safron before setting out with Hannibal King on the trail of Deacon Frost. King leads Blade to Frost’s elaborate underground base and recounts the vampire’s history for the past two centuries. Wolfman does a fine job of making Frost seem like a credible threat to Dracula’s title as lord of the vampires. Blade and King’s long-awaited confrontation with Deacon Frost is not a disappointment and ends with Frost’s destruction. Blade is reunited with Safron and his fellow vampire hunters while Hannibal King makes his exit from the series. Both the vampire detective and the iconic hunter now have closure to their lives as both their stories are successfully wrapped up.

#54, “Twas the Night Before Christmas” is a true classic with Domini preparing to give birth. Quincy Harker is recovering from his heart attack but pushes his fellow vampire hunters to slay Dracula immediately now that they have tracked him to the deconsecrated church. Rachel conspires with Lupeski to deliver Dracula to her to kill with Lupeski’s involvement kept secret to insure his betrayal not be revealed to the vampire or his followers. The vampire hunters make a valiant effort to slay Dracula, but the vampire calls a halt to the hostilities as Domini gives birth to their son. Colan’s portrayal of the infant manages to make it look both like a demonic vampire baby while also resembling the angel seen two issues earlier. Dracula declares it to be a night of peace as nearby a clock strikes midnight as churches in Boston celebrate the birth of Christ. Wolfman’s handling of the subject matter may strike some as sacrilegious while others find any treatment of religion to be highly offensive. From my own standpoint, his treating a world of supernatural evil coexisting with supernatural good is dramatically valid and makes for exceptional writing. Of course, the birth of Dracula’s son is only the beginning as Wolfman and Colan bring the series closer to its inevitable conclusion.

I can’t recall if I’ve mentioned this, but these are simply terriffic. I became interested in Tomb of Dracula about a year ago, and really appreciate the in-depth revisit. Best book of the era.

Thank you very much for your support. Hope you enjoy the rest of the series.

Have you seen the japanese anime from 1980 about The tomb of Dracula? This is the storyline