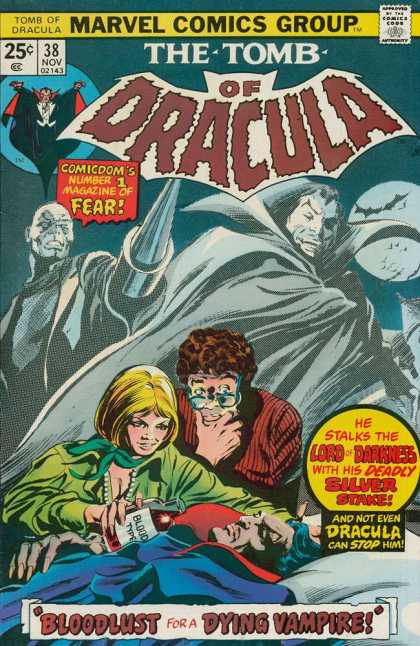 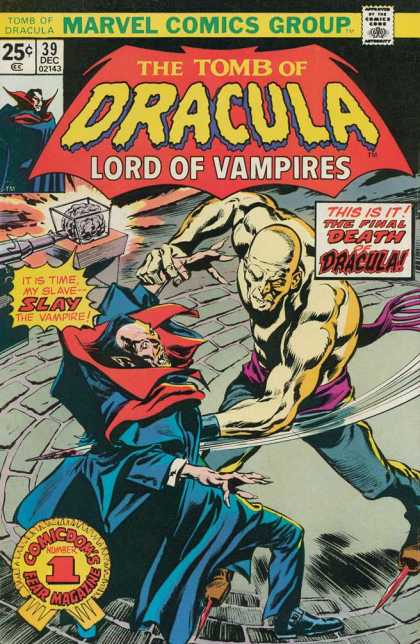 The Tomb of Dracula #38, “Blood-Rush” continues the more light-hearted vein for the series with the change of setting from London to Boston as the comic relief characters of the Woody Allen-inspired Harold H. Harold and the ditzy bombshell Aurora Rabinowitz set out to score some blood so that Harold’s house guest, Dracula doesn’t die. The scene shifts to Dr. Sun’s Boston headquarters where he is monitoring, via closed circuit television, a meeting between Quincy Harker, Rachel Van Helsing and Frank Drake. The issue ends with Dracula, Quincy, Rachel and Frank captives of Dr. Sun and his murderous henchman, Juno with the unlikely duo of Harold and Aurora setting out to rescue the vampire who has promised Harold an interview so that he can meet his publisher’s deadline.

Issue #39, “The Death of Dracula” is highlighted by a gripping battle between Dracula and Juno. The hook-armed Chinese assassin seems to have stepped right out of Marvel’s Master of Kung-Fu series. The move to include offbeat comic relief supporting characters also seems influenced by Doug Moench and Paul Gulacy’s acclaimed series. Both titles were unique for Marvel for eschewing the superhero formula and offering surprisingly modern updates of what were considered tired and perhaps exhausted literary properties (Dracula and Fu Manchu, respectively). Dracula is killed by Juno with a spike through the heart. The villainous henchman then uses a flame thrower to cremate Dracula on the spot. Quincy, Rachel, Frank and their new acquaintances, Harold and Aurora manage to escape Dr. Sun’s headquarters and alert the military to his scheme for world domination. The issue fades out on the maniacal Dr. Sun observing their meeting with the military, improbably via his ubiquitous closed circuit cameras, as the talking brain in a fish tank gloats over his seeming omnipotence. 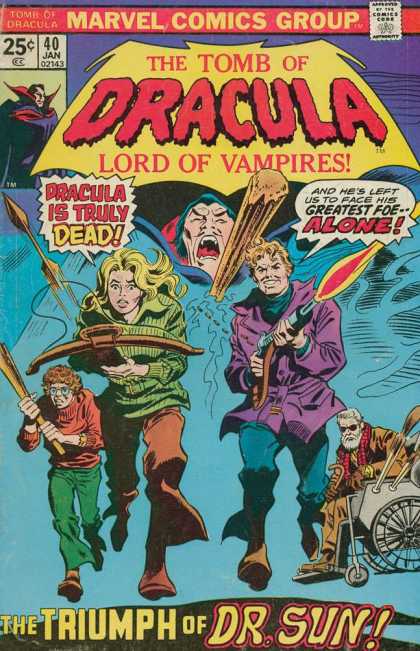 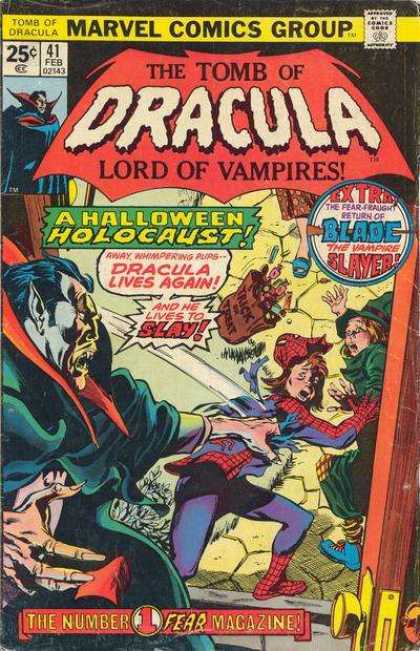 Issue #40, “Nightmares of a Living Dead Man” opens with a recap of Dracula’s death courtesy of Aurora’s nightmare. Rachel recalls via flashback an untold encounter with Dracula on her sixteenth birthday when Quincy yet again saved her from an undead fate just in the nick of time. One weakness Marv Wolfman’s scripting contains is his desire to weave Dracula into his characters’ back-stories to such an extent that the vampire appears incompetent for having failed to kill people he has encountered time and again over the span of their entire lives. The issue then moves to a largely ineffective military assault against Dr. Sun’s superior forces. The fact that the military is unable to penetrate a residential home in Boston really strains credibility. While Wolfman’s scenes showing Quincy, Rachel and Frank bonding with Harold and Aurora are well-written, the team’s subsequent commando-style raid on Dr. Sun’s headquarters where they successfully steal the urn containing Dracula’s ashes borders on the farcical as the issue reaches a triumphant conclusion that falls decidedly flat.

Issue #41, “Re-Birth” walks a fine line between treating the material seriously and playing the concept for laughs. While Quincy, Rachel, Frank and Harold pour through Quincy’s occult library vainly hoping to find some means of resurrecting the cremated vampire (the team has realized that he is their only hope of defeating the seemingly unstoppable Dr. Sun), it is lovesick Aurora’s tears touching the vampire’s ashes that bring about his unexpected resurrection. Harold is sickened when he realizes that it was a virgin’s tears that resurrected the vampire. Countless readers doubtless agreed with the unlovable nebbish, although for markedly different reasons. Wolfman does a good job in switching moods as the revived Dracula immediately returns to his predatory instincts and savagely murders a woman walking outside Quincy’s home. The welcome return of Blade to the series helps add an element of seriousness that has been sadly absent. For once, the lone wolf vampire hunter’s contempt for Quincy and his group is echoed by readers eager to see a return to a more dramatic tone for the series. There is another largely ineffective military raid on Dr. Sun’s headquarters, but this time the military are joined in battle by Dracula and Blade at the truly unexpected cliffhanger ending. 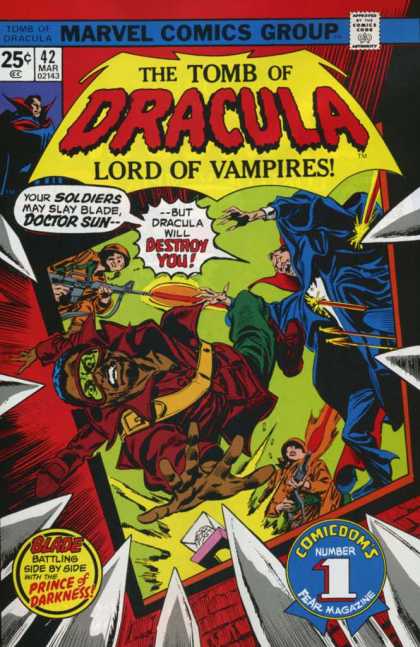 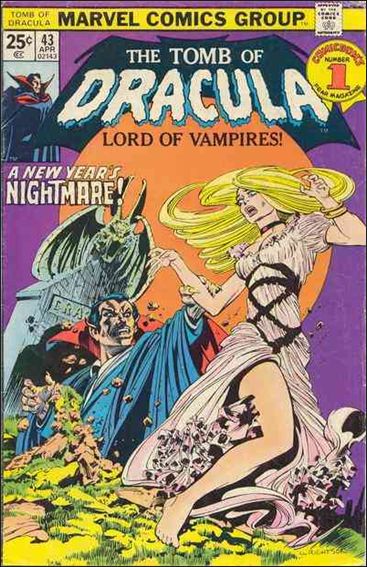 Issue #42, “A Final Battle Waged” at last wraps up the Dr. Sun storyline for good as Dracula and Blade provide the US military with some much-needed muscle in the battle with Dr. Sun. An unknown vampire is seen to be observing the battle with interest as Wolfman opens up a new storyline to develop over future issues. Dracula is finally shown to good effect in this issue as he singlehandedly drives Dr. Sun to the point of forcing the talking brain to commit suicide or else be crushed by the enraged vampire who appears able to withstand everything Dr. Sun can hurl at him. In the heat of the battle, Blade catches a glimpse of the vampire who has been spying on him with interest and recognizes him as the nameless white-haired vampire he has been seeking all his life for he was the vampire who attacked his mother the night Blade was born.

Issue #43, “The Night Staker” happily recalls the introduction of Hannibal King with another issue inspired by the classic 1970s occult television drama, The Night Stalker. The hero/narrator this time is grizzled newspaper reporter, Paul Butterworth. While derivative of Carl Kolchak, Butterworth is infinitely preferable to comic relief tabloid journalist, Harold H. Harold which makes the character’s one-off appearance all the more appreciated. Butterworth is an acquaintance of Harold’s and interviews him to get the scoop on the Dr. Sun caper. Wolfman and artist Gene Colan wring some humor contrasting Harold’s exaggerated recollections of his involvement with flashbacks that truthfully show the reader what really happened in the preceding issues. Through Harold, Butterworth lands an interview with Quincy, Rachel, Frank and Blade only to have Dracula attack the vampire hunters with the reporter becoming an unfortunate casualty. Colan’s artwork depicting Dracula’s attack on the team and his subsequent attack on Butterworth at his newspaper office where he is narrating the events of the issue from behind his typewriter serve as the series’ finest moments in too many issues. Portraying Dracula as a terrifying supernatural threat is infinitely preferable to the offbeat tone of the last eight issues. Happily, there was a method to Wolfman’s madness as the writer was preparing to deliver a far deeper and darker storyline and desired a lighter tone to offset the transition to a new setting. Seen from hindsight, his juxtaposing moods is a brilliant one, but for the loyal reader in the 1970s or one simply moving through a block of issues now via the trade paperback Marvel Essential or hardcover Marvel Omnibus editions, the lighter tone seems to hinder rather than strengthen the series.

Sorry to digress, but one comment reminded me of something I had read on a message board.

“Both titles were unique for Marvel for eschewing the superhero formula and offering surprisingly modern updates of what were considered tired and perhaps exhausted literary properties (Dracula and Fu Manchu, respectively)”.

Master of Kung-Fu was pretty darned close to a flat-out superhero book — if an exceptionally well-written one — for most of its run, with costumed enemies like Midnight, Razor-Fist, Shockwave, Zaran, and characters like Brynocki. Similarly, Tomb of Dracula and Werewolf By Night would be among the “horror titles that ended up doing lots of superhero crossovers”

I guess the problem with parsing the genre in a situation such as this has to do with the fact that secret agent fiction (at least in film and television) tends to go more for the outlandish than, for example, private eye fiction or domestic police fiction.

As an example, other than Dan Aykroyd’s silly Dragnet (1987), Joe Friday and his partners never battled costumed opponents (other than the Crimson Crusader, but they just threw him in as a proto-Kick Ass/Hero At Large mentally disturbed person.)

While the villains may have worn costumes some of the time in MOKF, they weren’t the rotating stable of supervillains from other Marvel comics and in many cases were not dressed in anything much more than exaggerated ninja outfits. More importantly, Shang-Chi was certainly not a costumed crimefighter.

Consequently, I would argue that MOKF was more reality-based like TOD given the acceptance of the supernatural or fantastic concepts inherent with the original properties. From that perspective, I don’t see the merit in looking outside of the comic book genre for comparisons (i.e. DRAGNET) as a police procedural has little in common with the comic book medium which was more of a direct descendant of pulp heroes such as The Spider, The Shadow, Doc Savage, etc.

Seen from that perspective with books like TOD, MOKF, and CONAN THE BARBARIAN in the early seventies, Marvel was drawing closer to the medium’s hardboiled pulp roots that had been nearly forgotten after the Wertham-led backlash of the fifties and the Pop Art camp that followed. In many ways, Frank Miller’s work of the eighties seems to pick up the same thread from Marvel’s more unconventional and largely dramatic seventies titles, although Miller would exert a far greater influence on both comics and eventually Hollywood. The thread still leads back to the pulps.

The main point I wanted to bring up has to do with, in the case of the secret agent genre, particularly in film and television, more fantastic series seem to dominate. So one finds The Avengers (John Steed and Emma Peel), The Man from Uncle, and so forth. Outlandish gadgets and outlandish threats more often show up there than in , as I noted, private eye movies and televisions shows or police films and television shows.

hey could be the series Luke Cage, Powerman, other example of that kind of Marvel comic-books from the first 70s?