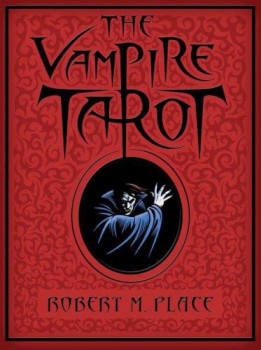 For those of you not familiar with the concept, tarot cards can be traced back to ancient Egypt but the deck as it exists today began in Renaissance Italy some time in the early 13th century. Predicting the future with a deck of cards has evolved from a serious undertaking, to a party trick and back again until the practice came to rest in the secular light of the twentieth century where it has since occupied a strange gray area between science and occult. The book which accompanies The Vampire Tarot gives a nice history of both the deck itself and its evolving uses, though plays a bit fast and loose with historical references. I find it ironic that the real Vlad Dracul was a knight battling for Christianity against the Muslim Turks and probably staked a few occultists as heretics in his day, but why bloody the water with facts?

The Vampire Tarot is a classic deck of seventy-eight cards divided into five suits, four minor and one major, unlike a standard card deck which has only four. Like all modern decks it is defined by is artwork, in this case a Dracula theme, with Jonathan Harker, Mina and even Brom Stoker himself representing elements of the “major” suit, while the “minor” suits consist of holy water, knives, stakes and garlic (no, I only wish I was kidding). As art goes, it’s of the comic book variety and not particularly striking. Many people collect tarot decks for their unique look and I own several myself, some of which I would call cheesy by theme but beautifully illustrated. However, if you love everything vampire, you’ll forgive this aspect and cherish them anyway, probably alongside your Robert Pattinson pocket folder.

All of this information aside, the only real way to review a deck of tarot cards is to actually use them to tell me something personally enlightening. I decided to perform a classic three-card reading on myself using The Vampire Tarot and comparing the results with the same reading done using a deck from my personal collection, a historical representation of the first complete tarot deck ever discovered in 1410. Comparison tests like this one seem to work well for laundry detergents, so why not?

The way this works is to shuffle the deck face down, then randomly choose three cards to represent ‘past,’ ‘present,’ and ‘future.’ This is what is referred to as a “quick reading” which was developed during a period in history when the Spanish Inquisition was known to show up unexpectedly and burn you at the stake for even owning cards not to mention using them, so you were forced to be quick about things. The book which accompanies The Vampire Tarot will help to interpret the meaning of each card. So here goes:

Card 1 (Past): The Eight of Holy Water
This card represents a variety of good choices as well as someone who has always been ambitious, practical and hard working.

Card 2 (Present): The Six of Stakes
This card represents someone who is elevated to a position of respect and admiration. It also signifies a life lived in peace, harmony and surrounded by loving relationships.

Card 3 (Future): Lord Byron, King of Knives
This card represents someone who is attractive and intellectual, yet mysterious and moody, whose full potential has yet to be realized but will ultimately be destined for greatness.

After careful consideration I have decided that no further comparison is necessary. This is clearly the most insightful and spiritually charged tarot deck I have ever had the pleasure of working with. It is infused with the mystical essence of its noble subject matter and worth every cent of the $27.95 investment. Make no critical financial or personal decisions until you purchase The Vampire Tarot and experience its astounding and intuitive magic for yourself.