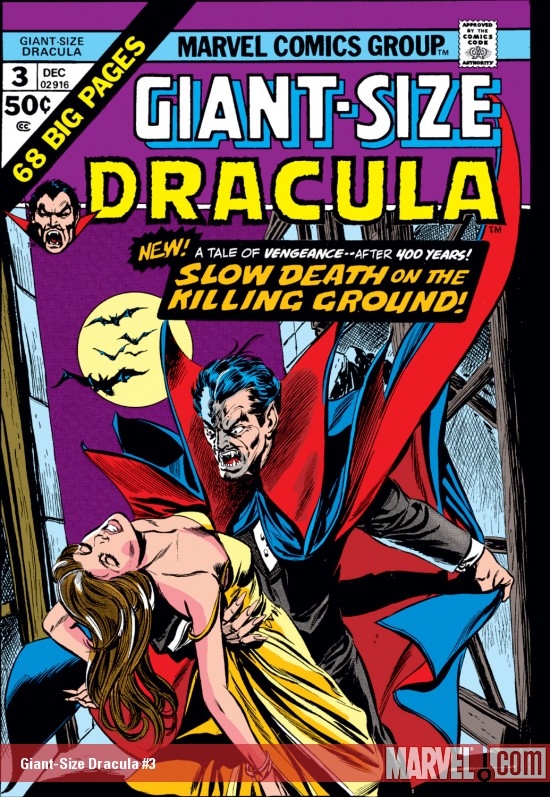 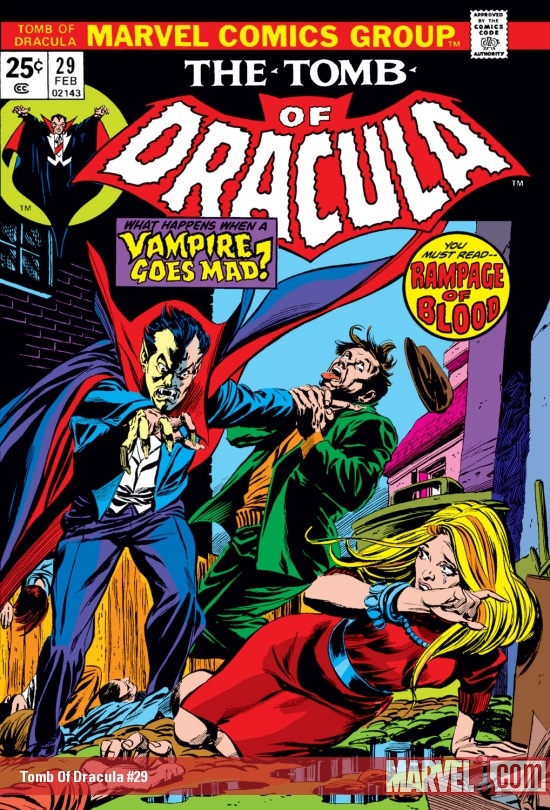 Giant-Size Dracula #3, “Slow Death on the Killing Ground” offers another strong script from Chris Claremont. It is a pity that Marvel’s Curse of Dracula series (as the Giant-Size quarterly companion title was listed on the splash page of each issue) did not continue longer for Claremont and artist Don Heck actually made a good B-team to stand alongside Marv Wolfman and Gene Colan with the monthly title. The story concerns Lady Elianne Turac, a 15th Century Wallachian noblewoman whose father fell victim to Dracula. Elianne swore eternal vengeance on the vampire and thanks to her becoming an Adept of the Black Arts, she was granted that immortality (bizarrely at the cost of her vision). Flash forward to 1974 and Elianne is now a blind Romanian militant who leads her band of terrorists in an unexpected raid on a society party in London. Their purpose is to abduct Quincy Harker to gain access to the Montesi Formula and wipe all vampires from the face of the earth. Being terrorists, Quincy should not be surprised when they gun down all of the dinner guests to insure no witnesses survive. As events transpire, Dracula ends up saving Quincy from the terrorists and only the timely arrival of the quarterly series’ protagonist, psychic investigator Kate Fraser saves Harker from ending up a vampire himself. Quincy ends up hospitalized yet again while Dracula sets out to end the threat posed by Elianne by destroying each of her associates and then draining her blood. The post-script sees Inspector Chelm and Kate Fraser arrive on the scene in time to put a stake through Elianne’s heart.

The Tomb of Dracula #29, “Vengeance is Mine, Sayeth the Vampire” is exactly the story readers should anticipate next. Having had time to brood over Sheila Whittier’s decision to leave him for David Eshcol, Dracula is at his most sadistic in this issue starting with a truly terrifying attack on an innocent woman and the crowd that tries to save her as the story opens. Sheila knows Dracula well enough to fear retaliation and for his part, David resolves to seek the vampire out in daylight and put a stake through his heart. From there the story transitions to India where Taj Nital and his wife relive the painful memories of Dracula’s visit to their village several years before with a legion of the undead. Before all was said and done, Taj had been left mute, his vocal chords slashed by the vampire’s bite. But for the timely arrival of Rachel Van Helsing, Taj would have fallen to become a vampire like his son. Through the tragedy of their lives, Taj and his wife reconcile and declare their love for one another as best they can. Meantime, poor David Eshcol finds Dracula not so easy to kill as he imagined. Wolfman and Colan depict the vampire at his most malevolent as David flees for his life only to find the vampire waiting at the door for him, laughing maniacally. From that horrifying scene, we cut back to Sheila as she answers the doorbell to find David’s bloodied corpse in the doorway and Dracula behind it, taunting her to welcome him home. It is a jarringly effective scene that drives home the point that a woman who ignores a predatory male’s nature believing she is the exception is doomed to find she is just another victim in the end. That is precisely how the story concludes with Sheila hurling herself through her bedroom window after Dracula has backhanded her. Colan’s artwork is simply stunning showing Sheila and the broken glass falling ever closer toward the “camera” in three succeeding panels as an anguished Dracula tries and fails to reach her in time. This is simply the comic medium at its most effective and rises above the standard set by nearly every Dracula film ever produced. Stunning work that is as effective then as it is now. 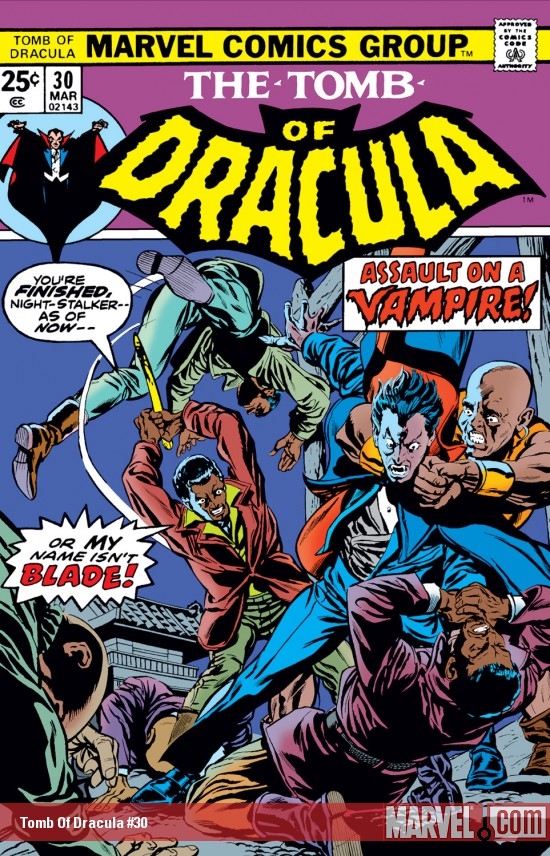 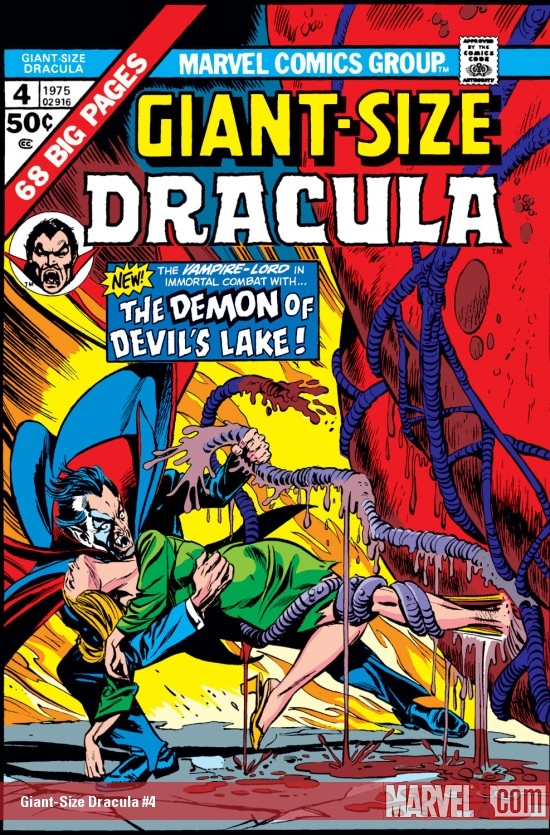 Issue 30, “Memories on a Mourning Night” finds an embittered Dracula in a melancholy mood reflecting on past events depicted as brief vignettes via flashback. The first shows the vampire played for a fool by Lyza Strang who conspires with Dracula to murder her husband, Archibald (a rival of Otto Von Bismarck) and then betrays the vampire after the deed is done. Of course, she reaps her just reward for her double betrayal. Next is a recent recollection of Dracula befriending a young blind girl he initially sought to prey upon. When the girl’s father shoots and kills her mother during an argument, Dracula murders the father and is mystified when the young girl does not appreciate his act of vengeance. Lastly, Dracula recalls his first encounter with Blade and his all-black vampire hunters in an episode in China that occurred prior to the events of the first issue in the series. This was an enjoyable filler issue that gives the characters more of a sense of history. It also serves as a nice respite after the bloody finale of the Chimera storyline.

Giant-Size Dracula #4, “Let It Bleed” sees David Anthony Kraft take over scripting chores from Chris Claremont. Kraft does an admirable job with a tale of Dracula during the Great Depression befriending Beverly Carpenter aboard a ship. When Beverly returns home to her father’s farm in North Dakota, she is unaware that her father is deeply involved in Satanic rituals and murder. Dracula follows her there and once again plays the role of unlikely hero/avenger who stops the menace but not in time to save Beverly from her murderous father. 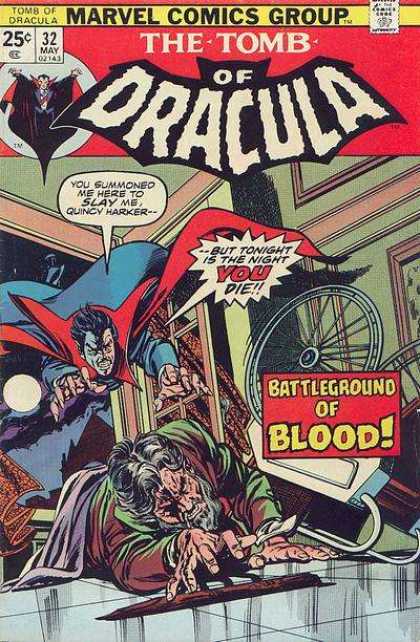 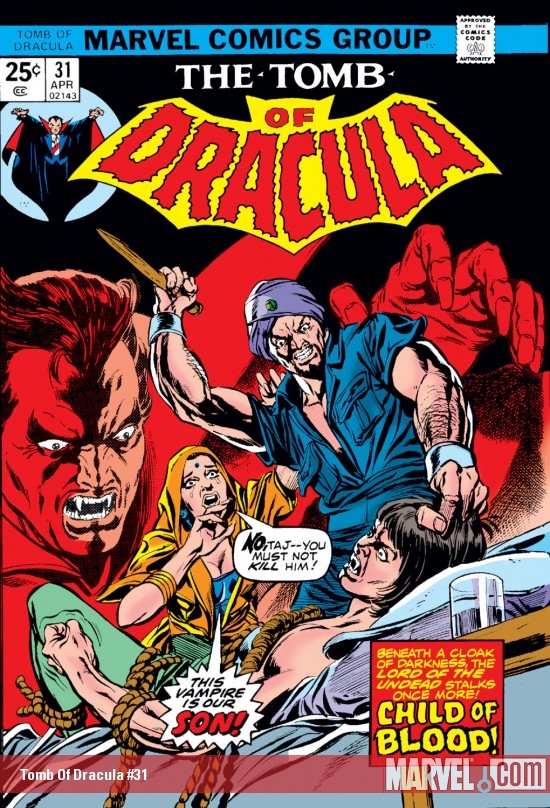 Issue #31, “Ten Lords A-Dying” starts a new storyline off with Inspector Chelm and Quincy Harker investigating Dracula’s involvement with Lord Singleton, a corrupt Parliamentary minister. From there we quickly cut back and forth between India (where Taj and his wife prepare to drive a stake through their son’s heart before the angry villagers can burn him alive) and Brazil (where Danny Summer leads Frank Drake to his new job supervising a crew of zombie slaves). Dracula confronts Lord Singleton who knows the vampire is dying. Before Dracula can torture the truth out of the PM, Inspector Chelm arrives on the scene. Chelm misses his opportunity to kill the vampire who boldly declares that tonight he is finally going to end Quincy Harker’s life as the issue reaches a gripping conclusion.

Issue #32, “And Some Call Him Madness” begins with poor blind, crippled Quincy Harker awaiting his doom when a phone call unexpectedly informs him that Dracula’s brides have abducted Rachel Van Helsing. In India, Taj struggles with the villagers, but a stake is driven through his son’s heart. In Brazil, Frank Drake realizes that Danny Summer has betrayed him to die at the hands of murderous zombies. The reader, unlike Frank, discovers that Summer is in the employ of Dracula. The vampire finally confronts Quincy Harker and Wolfman makes the most of the character’s obsession with Bondian gadgets as Harker unveils a staggering array of deadly devices tailor-made for the vampire. Amazingly, Harker gets the upper hand in the conflict and the blind, wheelchair-bound old man has the pleasure of knowing that Dracula is dying after arrows have pierced his heart. The phone rings at that instant and Gene Colan depicts a ravaged Rachel Van Helsing being tortured in leering sado-masochistic style by Dracula’s lesbian brides who taunt Harker with the knowledge that if Dracula dies so will Rachel as the issue ends on the series’ finest cliffhanger yet.