Numerous memorable exchanges occurred during the week I attended the Writers and Illustrators of the Future workshop as one of the winning authors. Many of the more outrageous I can’t quote here (the Workshop is a “safe” environment for people to express opinions they wouldn’t in public, such as conventions), but here’s one my favorites that I feel is quite safe out in the open:

Eric Flint: For God’s sake, why?

Yes, being a scholar of the Thirty Years’ War does cause people to look at you askance, even another person who has done extensive research into this most anarchic of Early Modern wars. Suffice it to say, I simply cannot help my attraction to the madness of that long, gory, indecisive war. Magnificent madness.

At his acceptance speech during the awards ceremony, writer Brennan Harvey (who is no relation to me except now as a good friend) stated that “K. D. Wentworth and Tim Powers filled my head up to here,” making a motion far above his forehead. “I don’t even know what I learned yet.” That’s the best way to put it. In that week, the experience of listening to advice from a who’s-who of the best in speculative fiction made it sometimes feel as if I were getting machine-gunned with data. I wrote as fast as my hand could go over my notepad, and eventually I’ll sort it all out and see what sticks the most. However, the sheer mass of it made me realize that I can’t do a single blog post to cover what happened during the week. So I will focus on one item at a time.

The most instructive exercise we writers underwent during the week was the “twenty-four-hour Story.” The short version: write a story in twenty-four hours. No upper or lower word-count limit, as long as it is a complete story.

There was more to it, however. K. D. Wentworth said, “Whatever happens in you life, you say, ‘I can use this!’ ” To explore that, our stories had to be syntheses of three outside influences:

1) The Token. This was a small item that K. D. Wentworth handed to each of us the day before we had to write our stories. Each was a random trinket, some bizarre, some banal. Because K. D. Wentworth uses the same items from year to year, I can’t reveal what they are (“Otherwise everybody would be making requests for certain tokens each year,” she explained). Jordan Lapp, who was handling writing the public blog for the week, posted a photo of me holding up my token, so it’s semi-public now. But I won’t spread it further or post it here.

2) Research. The thirteen writers walked down Hollywood Blvd. to the Hollywood Public Library where had instructions to do research on any topic we stumbled onto. The trip down Hollywood Blvd. could make a story in itself, although as a local it didn’t have the same affect on me as it did for some of the writers who had never been to Los Angeles, and the one who had never been to the United States. Once in the library, I picked an aisle, looked at the Dewey Decimal System placard denoting all the subjects in the aisle, and had the words “Penal System” leap out at me. I walked to that section, and tugged out a slender book titled Prison: Introducing Issues with Opposing Viewpoints. Once I started flipping through it, I discovered it was probably aimed at high school students to help them with critical thinking. The book consisted of essays culled from various sources that put contrasting arguments about the U.S. prison system beside each other. I read through “Prison Are Beneficial to Society” vs. “Prisons Are Not Beneficial to Society” and saw that there was enough material here for three books. I found especially intriguing the suggestion — whether true or not — that prisons teach criminals how to be better criminals instead of rehabilitating them.

3) Talk to a Random Stranger. This notion terrified all of us. I thought I would be the only one nervous about engaging someone on the street in conversation, but I forgot that most writers have a level of introversion. Perhaps it doesn’t match mine, but it’s there. Tim Powers assured us that this is not as difficult as it sounds. He was right, and the results for most of us were, hum, amusing. Especially when the street on which trolling for someone interesting to talk to was Hollywood Blvd., where people wearing ten-foot-tall Dr. Suess hats are merely part of the landscape. We were supposed to engage in the conversation in our walk back from the library, and we couldn’t tell the person we talked to about our reason for stopping to chat.

My random encountered happened about five blocks down Hollywood. I had already gotten mistaken for Tobey Maquire twice, and would have yet a third occurrence before I got back to the hotel, but I resisted taking the easy path of speaking to someone who had approached me. Instead, I wandered past a tattoo parlor and noticed two men admiring a third man’s tattoos. So I joined in, and took the chance to ask the man to explain what his tattoos meant. I was especially intrigued with the Latin phrases on his arm. I didn’t tell him that I can read Latin, so I asked him what the words meant. He explained — and was completely wrong about the translation. Startlingly wrong. I just nodded and inwardly smiled. I had hit the story-idea jackpot! This was too good. His tattoo meant almost the opposite of what he thought it did. He thought ex means “without.” No, it means “out of, from, down from.” He thought “IVSTVS” means “spirit.” No, the Latin word iustus means “just, fair, lawful.” The word for spirit is animus, or as it would have been tattooed in all-capital script, “ANIMVS.”

At that point, I had a complete story idea mapped out in my animus.

At 5 p.m., the official twenty-four-hour period to write the story began. The thirteen of us had until the re-convening in the main classroom at Author Services at 5 p.m. the next day to write the first draft of speculative fiction story combing our three prompts.

I never worried much about my ability to write a story in twenty-four hours. After years of National Novel Writing Month and my general propensity to move fast, doing about 5,000 words in a day was not troubling. I was more concerned about the lack of planning time and the rather rough state of the final product. I never let anybody read my first drafts, but this time I would have to surrender one for a possible general reading.

The writers fanned out through the lobby and other public rooms of the Roosevelt Hotel that evening. It was a bizarre environment in which to work, because even on a weeknight the Hollywood party-life is flowing like overpriced liquor ($500 for a bottle of Jack Daniels — I am not joking) through the hallways of a ritzy hotel. A bunch of stressed writers crooked over laptops and dressed in their best shabby casual were sprinkled through the cocktail-dress-and-hipster partiers. I’m surprised the omni-present hovering bouncers didn’t kick us out as vagrants. 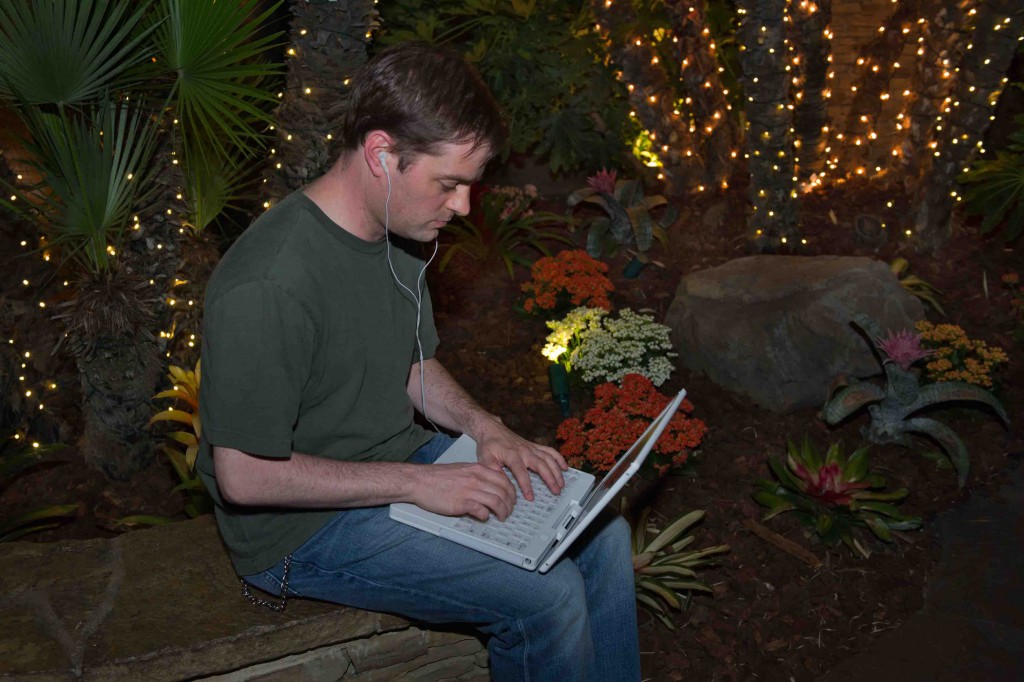 This photo of me writing near the pool is staged. Hugette, the official photographer for the workshop, was barred from taking photos in the lobby (those omni-present bouncers are always on the watch), so she asked me to move to the pool bar and pretend to work there. I ended up enjoying the location — it was less crowded than other parts of the hotel — and managed to reach 4,000 words that evening in my bizarre fantasy story centered on mistranslated magical tattoos.

The next morning, I typed the remaining 2,000 words in my hotel room. I was glad to reach the end, and even more pleased when my story was not randomly selected as one of the three that would be handed out for critiquing.

I think all the writers would agree that this “triple prompt + speed write” exercise was one of the best experiences of the workshop. It was certainly the most stressful; even given my usual working speed, trying to produce something decent in the midst of a workshop where you’re surrounded by some of the top talent in the field freaked me out. But the exhilaration of it was a fabulous intoxicant.

The main lesson this exercise taught was how the universe feeds the writer everything he or she needs when it comes to inspiration. It’s a very Taoist way of perceiving writing: discovery through openness to experience. I’ve done stories from writing prompts before, and usually found it a mechanical exercise. The combination of three elements, one of them social, made this far different from other writing prompt exercise. Thrown into the pressure-cooker of time and the atmosphere of the Writers of the Future workshop and the craziness of a hot-spot hotel made for a surreal creativity factory.

What do I think of the first draft that I produced out of this? Well, It’s certainly strange. I haven’t yet decided if I will rewrite it, but I am starting to lean toward returning to it. K. D. Wentworth and Tim Powers said that quite a few of these twenty-four hour stories have gone on to sell to major markets. I saw potential in the three stories that were randomly given to us for critique.

But whether I finish it, or whether or not it sells, I’ll never forget the writing of it.

I would totally read a story about mistranslated magical tattoos. These posts have been a lot of fun to read.

The story I got out of a similar triple prompt assignment at Orson Scott Card’s Literary Boot Camp was the one I sold to Jim Baen’s Universe, though it took me two years to get it into a state of polish I was happy with. My serendipitous random conversation was with a bartender who claimed her bar was haunted.

Yeah, put me on the list of those who want to read your story. I also want to read the story of Without Spirit versus From Justice. Congratulations on making it to the workshop, Ryan. And props for getting something out of it as well; and thank you for sharing.

[…] find all the news about Ryan Harvey’s Writers of the Future Award; Harry Connolly on making his first book trailer with a hot model; how Howard Andrew Jones […]