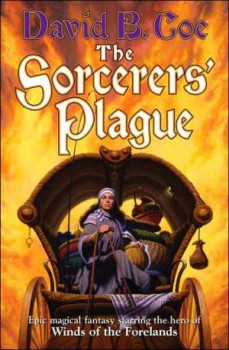 The pestilence for which the book is named is the central factor of The Sorcerer’s Plague, and a great deal of the narrative follows the plague and its architect, a bitterly vengeful old woman named Lici, throughout the Companion Lakes Region as village after village falls to the horrible ailment. The pestilence kills by unleashing a person’s magical power in such a way that it cannot be controlled, causing massive devastation as torrential elemental invocations destroy entire villages. Lici, who as a young girl herself witnessed the pestilence consume her own people, weaves the fatal illness into baskets that she peddles from market to market, sowing destruction in her wake.

But amongst Lici’s adopted people, the Mettai of Kirayde village, one man slowly uncovers the truth about her with the aid of an old journal. Besh, the most interesting and appealing character in the book, is in his sixties, wise but not without his own failings, a man motivated enough by the horrible news from the countryside to swear a blood oath to stop Lici. Sirj, his son-in-law with whom he has a history of unfair treatment, joins him, and the two set off to find Lici. The other major characters of this book are a pair of Qirsi from the Forelands, foreigners to the world of the Southlands, who travel to the Companion Lakes Region and settle uneasily amongst a Qirsi clan. By the novel’s end one of these Qirsi, Grinsa, a powerful sorcerer known as a Weaver, sets off with a party to investigate the plague and, hopefully, bring it to an end.

The Sorcerer’s Plague reads like a set-up piece for the remainder of the trilogy, and most of its 400 pages simply deal with characters going from one place to another. My chief criticism of this is that it takes about 250 pages before the plot really starts moving in interesting ways, and to me the book seemed about a third as long as it needed to be. Readers more accustomed to fast-paced fantasies full of adventure and tension may balk at the languid pace and the interludes of little-to-no dramatic significance, whereas those who prefer large epics that unfold at a more stately rate may find this aspect of the book more of an asset than a fault. I do think in many respects it’s a question of what exactly one wants from a fantasy novel, and questions of pace tend to fall more in the realm of personal taste.

What Coe does really well is create a fantasy world that isn’t about good and evil and black and white, but about competing interests and antagonisms based on history, race, and class — just like in the real world. The plague itself is also an interesting concept and is well presented, and Lici’s reasons for doing what she does grow plausibly from her character, as do the motives of the other major players. While I may have preferred it to be leaner and fraught with a bit more tension, Coe’s clean prose, reliable characterization, and believable dialog where never at fault for my impatience with the story. As the opening of something larger, one can hope that the momentum generated toward the end of the book will continue in future volumes. And at the end of the day, no piece of a trilogy can really be judged in isolation, so the relative success of The Sorcerer’s Plague will ultimately depend upon how Coe handles the story in the two remaining volumes.