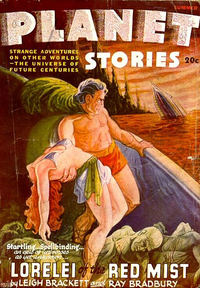 Howard used his fifteen minutes of fame to shine a spotlight on neglected pulp masters:

The pulps have a well-earned reputation for purple prose, but there was gold among the dross.

Fine adventure stories from other genres were printed in pulps like Adventure, Weird Tales and Planet Stories, but unfortunately, many of these authors remain neglected or marginalized. Today’s readers might expect to find nothing but legions of square-jawed heroes, wilting damsels and tentacled monsters in the old magazines, but there were also skilled, inventive writers plying their trade, evoking thrills and chills without formulaic plotting.

Howard calls out three modern reprints of some of the very best fantasy from the pulp era, returned to print by publishers who have worked hard to preserve pulp fiction and present it to a modern audience:

All these publishers deserve your support — and you deserve to read these stories. As Howard says in his final line, “Some of the tales are dark, many are brooding, but though they be decades old, each beguiles with a siren call to strange lands to witness heroic deeds.”

This seemed to be getting buzz from the get-go: very well played on H.A.J.’s part. I hope lots of people go and comment over on NPR, and for that matter, vote on comments already made to maximize this genre moment in mainstream media.

I naturally wanted to discuss Harold Lamb so I’d be writing about my three favorite adventure writers in the article, but had to trade out Lamb for Wellman at the last moment. Conflict of interest. Hard to talk about how great a collection is when, uh, I edited it. It’s not my fault I edited most of the Lamb collections that are in print…

You need a pseudonym, Howard.