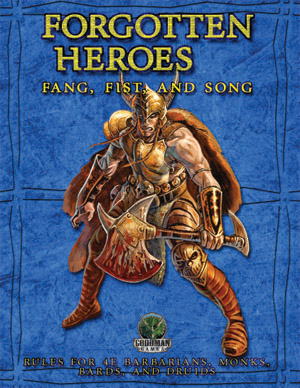 With the release of Dungeons and Dragons 4th edition, there came the opportunity for independent game companies to introduce whole new lines of products that focused on expanding the gaps left in the core materials presented by Wizards of the Coast. In this review from Black Gate #14, I look at supplements from two of these product lines, published by the fine people at Goodman Games, covering various races and character classes.

Since the review was written, Wizards of the Coast has filled many of those gaps with their own materials, such as the D&D Player’s Handbook Races series, which includes the official supplements for both the Tiefling and Dragonborn races. 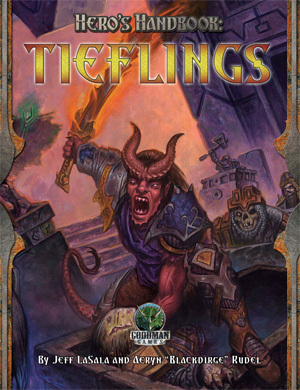 Hero’s Handbook: Tieflings provides expanded histories and cultures for the part-demon race (now a core D&D race outlined in the Player’s Handbook). It attempts to go beyond the basic material to create a richer race of beings. For example, it offers tieflings the ability to take on demonic feats, called malisons, which offer the use of a power… in exchange for a related curse. The powers (and the curses) are available in different levels based on the different tiers.

An even more impressive addition to the tiefling mythos is that, at their coming-of-age, a tiefling reveals a branded Legacy from a specific demonic Lord Benefactor. The Legacies of Wrath, Covetousness, Indulgence, Pride, Indolence, Lust, and Avarice provide some unique feats and new paragon paths to those connected to them.

Some of the Legacies, though, are there just for roleplaying flavor, instead of offering new character options. The Legacy of the Unknown Benefactor, though described in the book, offers no tangible benefits, but makes the bearer something of an outcast among even tiefling society. Other Legacies, such as Deception, Affluence, Pain, and Darkness are mentioned, but are not described in detail.

Hero’s Handbook: Dragonborn offers similar enrichment for the Dragonborn race, focusing on the ancestral ties of honor that link these creatures to their draconic heritage. It introduces a variety of clans, which yield new roleplay options, feats, and paragon paths.

One interesting addition is the Dragonborn belief that each family possesses a “family destiny.” Charts allow players to craft a destiny based on their unique family history, some of which may result in either Ancient Heirlooms or Ancient Foes. This makes for a great role-playing aspect to the Dragonborn race.

Finally, the book presents the Cult of Apophis, a rogue faction that corrupts the noble Code of the Dragon into a quest for greatness… at any cost. These fiends, along with the genetic throwbacks the Dragonborn Atavists, show up among 20 pages of Dragonborn-themed monsters and NPCs.

Among my favorite in this section, though, are the dire drakes – reptilian mounts bred by the Dragonborn. The picture looks roughly like riding on the back of a reptilian Tauntaun from Empire Strikes Back, or maybe a large velociraptor. Now that is a mount worthy of a Warlord or a Paladin!

The Forgotten Heroes line of books, on the other hand, focus on providing old 3.5 edition character classes to the 4E setting. Forgotten Heroes: Fang, Fist, and Song does this for the Barbarians, Monks, Bards, and Druids. To support this re-introduction of older classes, the supplement recommends introducing an apocalypse into your setting, in which these ancient classes arise out of the ashes.

However, Barbarians, Bards, and Druids have since been re-introduced in the Player’s Handbook 2: Arcane, Divine, and Primal Heroes, and the Monks are available in 2010’s Player’s Handbook 3, so the apocalypse may be a bit much (although it’s always a fun thing to add to any game). Still, there are significant features which make the sourcebook interesting.

For example, the Barbarian class uses rage in a Defender role, rather than the Striker role it was given in the Player’s Handbook 2. Also, the supplement links a barbarian’s powers to a totem spirit: bear, eagle, or wolf. Certain class powers get modifiers based on the associated totem. It’s an interesting system which adds a bit of depth to the class, but I’d rather go with a shaman if I wanted a spirit companion.

Bards are one of my personal favorite classes, but I think the version in the supplement ends up falling a bit short. They lack the versatility that makes the bard such an excellent class. These bards can’t cast rituals and are too closely tied to music only, through the bard song ability. They are allowed to use only instruments as implements for accessing their powers, not wands or songblades. However, despite these problems, I actually like their two bard paragon paths, Songweaver and Loremaster, more than the ones provided in the main sourcebook.

Druids also feature some significant differences, although they can at least cast rituals. Their wild shape ability is significantly limited, locked into only a single animal shape throughout the Heroic tier, though at higher levels they do get some interesting at-will abilities (although getting darkvision isn’t, in my opinion, a feature of wild shape, but is instead a whole different power). They also get an animal companion, but in total it just doesn’t balance out.

Though Fang, Fist, and Song didn’t completely measure up, Forgotten Heroes: Scythe and Shroud has the benefit of addressing classes that are mostly untouched by the 4E core rulebooks: the death-powered classes of Assassins, Deathwardens, Necromancers, and Spiritsworn. These classes are great for darker player characters or certainly for NPC villains, and the paragon paths – such as Pyrotechnic Killer, Spirit Visionary, Gravelord, or Doom Knight – are wicked cool. If you’re playing one of these classes, who knows, you might even angle for the Epic Destinies: Angel of Death or Demilich. (Or, if you’re unlucky, your game master might have this book and you’ll run afoul of them…)

Of all these books, I’d say that Scythe and Shroud is the most useful, with Fang, Fist, and Song coming in last. The two race books are useful, if you’re looking to expand some cultural and social aspects. If you’re looking to add some versatility, you could certainly adapt features from any of these books as a rewarding treat into your game.