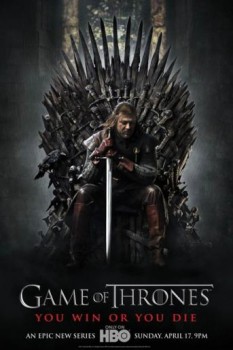 It is no secret that those who imagine themselves to be serious literati tend to despise the science fiction and fantasy genres. While it is increasingly true that there is a lot to be despised about the present state of SF/F literature, it is not at all difficult to discern that there is a big difference between those contemptuous critics who are actually familiar with the genre and those who are not. Strangely enough, the literary contempt for SF/F, which was originally based on the thin characterizations and juvenile appeal of Golden Age science fiction, has apparently now expanded into the cinematic world as well. This is a little strange given the way in which the same historical deficiencies of classic science fiction literature clearly apply to the cinema, to say nothing of the present state of television drama.

The New York Times review of Game of Thrones, which begins tonight on HBO, is remarkable for the reviewer’s complete lack of familiarity, not only with George R.R. Martin, with the last 30 years of the fantasy genre as well. Consider the article entitled A Fantasy World of Strange Feuding Kingdoms:

The imagined historical universe of “Game of Thrones” gives license for unhindered bed-jumping — here sibling intimacy is hardly confined to emotional exchange. The true perversion, though, is the sense you get that all of this illicitness has been tossed in as a little something for the ladies, out of a justifiable fear, perhaps, that no woman alive would watch otherwise. While I do not doubt that there are women in the world who read books like Mr. Martin’s, I can honestly say that I have never met a single woman who has stood up in indignation at her book club and refused to read the latest from Lorrie Moore unless everyone agreed to “The Hobbit” first. “Game of Thrones” is boy fiction patronizingly turned out to reach the population’s other half.

Since the arrival of The Sopranos more than a decade ago, HBO has distinguished itself as a corporate auteur committed, when it is as its most intelligent and dazzling, to examining the way that institutions are made and how they are upheld or fall apart: the Mafia, municipal government (The Wire), the Roman empire (Rome), the American West (Deadwood), religious fundamentalism (Big Love). 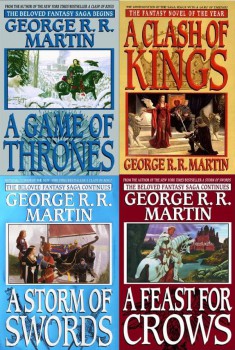 When the network ventures away from its instincts for real-world sociology, as it has with the vampire saga True Blood, things start to feel cheap, and we feel as though we have been placed in the hands of cheaters. Game of Thrones serves up a lot of confusion in the name of no larger or really relevant idea beyond sketchily fleshed-out notions that war is ugly, families are insidious and power is hot. If you are not averse to the Dungeons & Dragons aesthetic, the series might be worth the effort. If you are nearly anyone else, you will hunger for HBO to get back to the business of languages for which we already have a dictionary.

Setting aside the obvious absurdity of declaring that HBO’s take on the Mafia, much less Mormon polygamy or the Roman Empire, can be reasonably described as “intelligent”, (to say nothing of “accurate”), it is eminently clear that the reviewer has no idea that women have been the dominant force in both writing and editing fantasy literature for at least the last 20 years. Epic fantasy of the sort that Martin writes is one of the few areas where male writers are still the leading figures; one would imagine that even the most erudite connoisseur of cable television would be at least peripherally aware of the likes of J.K. Rowling, Stephanie Meyer, or Laurell K. Hamilton, each of whom have spawned a legion of imitators and none of whom happen to write in anything that can be legitimately described as “the Dungeons & Dragons aesthetic”. Indeed, much modern fantasy bears much more similarity to the Oprah book club aesthetic than it does to the classic fantasy of J.R.R. Tolkien. If Game of Thrones is mere boy fiction, as the reviewer sneeringly declares, then one can only conclude that the fantasy genre could certainly do with considerably more of it and rather less of the tedious girl fiction that revolves around the supreme importance of being strong, independent, and true to yourself when not being penetrated by animate corpses and seductive were-seals.

Now, I don’t know if HBO’s cinematic version of Martin’s novel will be worthwhile or not. I certainly hope so. But there is only one way to find out, which is to watch Game of Thrones tonight. And if the reviewer’s dislike of True Blood is a reliable guide, I imagine that Martin’s fans will not be disappointed.

Two points:
1. Even though its been a while since I read a Kakutani review, I detect a similar odor coming from Bellafante’s idiotic review (but who actually thinks the NYT has reviewers that are familiar the fantasy or science fiction?).
2. The sentence that begins “If A Game of Thrones is mere. . . ” is honestly odious and unnecessary. What purpose does it serve? What is the point of that statement?

1. I have to admit, I assumed that the NYT would have at least one reviewer who was familiar with fantasy newer than Dungeons & Dragons.

2. What purpose does it serve? To underline the blatant sexism inherent in the reviewer’s dismisssal of A Game of Thrones. What is the point of that statement? To express my opinion that the so-called “boy fiction” of Martin is vastly superior to most of the dreadful fantasy fiction being published today.

To be fair, the NYT’s movie and TV reviewers are not reliable in ANY genre. And, while they are probably shopped out, they have had reliable book reviewers in the sci-fi and fantasy genres. For example, I remember them calling Sheri S. Tepper’s “Grass” one of the best sci-fi novels, an appraisal which I personally agree with.

As pea-brained as the author of this article seems to be when it comes to knowledge of the Sci-Fi genre, its history, and the fact that she feels Dungeons and Dragons its truest representation, I think she understands one thing very well: Sci-Fi IS in fact a genre, and therefore has a huge amount of people the will cry foul at the critique of any given item within the genre.

Reading this article, I have a hard time believing that Bellafante might actually think she knows what she’s talking about, but it seems clear that she knows who is going to be reading her article. I’m sure this negative review is getting way more hits than a positive or even a well-written but mediocre review would get.

Can you say, “Troll”? My question for Bellafante isn’t why she stooped to this level of self-serving journalism, but rather why is she so obvious about doing it?

An intriguing observation, jsievs. Perhaps the NYT has gone to the Gawker model of compensation with its new paywall and the reviewer is being reimbursed on the basis of her page hits.

A wise man ( not a wizard just a wise man ) once paraphrased another wise man as saying, ‘90% of everything is crap.’

That includes reviews of everything in question…

The media will denigrate anything secular Western women find distasteful or, worse, makes them feel uncomfortable.

SFTheory1 – most of the books stocked in the fantasy section of bookstores should be moved to the romance section (assuming a recycle bin isn’t available) because they would be more properly classified as a sub-genre of romance than any sort of fantasy.

Theo, I see your point, but I think focusing more on the genre and the issues you have with that genre rather than creating a gendered binary of boy’s fiction= good/ girl’s fiction=bad would have avoided misunderstandings.
Tyr, last time I went to a bookstore (though its been a while)I think they were in the romance section.

Someone has to bring up Debra Doyle’s Girl Cooties Theory of Literature, so it might as well be me.

That said, I regard paranormal romance as a blight on the genre. If you want to guarantee that I will not buy a book, feature a high heeled shoe prominently on the cover. Even the friends who recommended Laurell K. Hamilton’s first few books to me, back before paranormal romance was a named subgenre, now find her unreadable–all those draggy descriptions of clothes, these readers lament, and the same descriptions again and again! It’ll be a good day when the paranormal romance trend goes the way of the horror boom.

Bellafante’s problem is that she dreads geek cooties so much, she can’t even see that there are female geeks. Oh, well. At this point, she’s the dead horse who hardly needs more flogging. (Unless she were a character in a Laurell K. Hamilton novel, in which case she’d be an undead were-horse, flogged at great length, but only after an elaborate and thrice-repeated description of her wardrobe.)

“I think focusing more on the genre and the issues you have with that genre rather than creating a gendered binary of boy’s fiction= good/ girl’s fiction=bad would have avoided misunderstandings.”

Perhaps, but let me point out that I’m creating nothing. The reviewer is the one who first created a gendered binary and then declared boy fiction = bad. I am simply pointing out that if we are to accept that such a binary division exists, I will absolutely prefer the boy fiction if A Game of Thrones is a conventional representative of it as the reviewer claims it to be. Unfortunately, as we know, it is more of a superlative example than a conventional one.

And I will add that despite my overt loathing for what so many female editors and authors have done to the genre by creating the paranormal romance phenomenon that now dominates the SF/F shelves, (a blight on the genre for which “girl fiction” is a reasonable description), I would never deprecate female writers in general given my reverence for Susan Cooper and Tanith Lee, who in my opinion are two of the very best authors to have ever written in the SF/F genre. And Lois McMaster Bujold has demonstrated that she can write very good fantasy as well as award-winning SF.