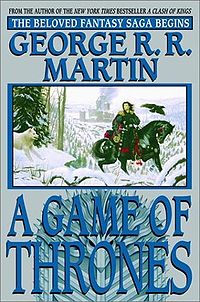 Like many George R.R. Martin fans, I have re-read A Game of Thrones in order to refresh my memory prior to the advent of the HBO television series. I actually wound up re-reading all four books in the series, as you do, which should prove to be useful considering the scheduled release of A Dance with Dragons later this summer.

But since I’d so recently read four of Joe Abercrombie’s books, which have occasionally been compared with Martin’s series due to their similarly dark and violent nature, I thought it might be interesting to compare some of the similarities and differences between the two epic fantasy series.

Settings: The world of A Song of Fire and Ice is more conventionally epic. The world is not only medieval, but identifiably English, as the conflict between the Lancastrian Lannisters and Yorkist Starks are more than a little remniscent of the Wars of the Roses. While the geographic scope of the series expands well beyond the quasi-English Seven Kingdoms, it is quite clear that the wogs begin at whatever Martin’s equivalent of Calais might be. The world of The First Law trilogy is, on the other hand, an unusual amalgamation of a Roman-barbarian clash of cultures with an almost Napoleonic spin as the concept of the Union, combined with the military focus and the frontier aspects, tends to feel more akin to the American Civil War era than the medieval period. Ironically, it is the American writer who has created a pseudo-Britain and the British author who has created a pseudo-America. I think Abercrombie’s world is more original, but Martin’s is more enjoyable, as Martin does a more effective job of presenting a credible history for his setting. 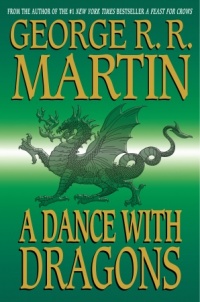 Characters: As I mentioned in a previous Black Gate post, Abercrombie’s characters are well-written, but portray a very limited range of the human experience. Martin, on the other hand, does a superlative job in transforming villains into heroes and heroes into villains. Even the most annoying and contemptible characters, like the doomed and futile prince, Viserys Targaryen, are seen through sympathetic eyes from time to time. The way in which Tyrion Lannister is portrayed is particularly masterful, as the dichotomy between his twisted, dwarfish frame and his formidable mind resolves itself in an increasingly unpredictable manner. More importantly, Martin’s characters are much more broadly representative of the human experience. There is no room for the heroic persistence of a Brienne of Tarth, or even for a humble loyalty of a squire like Podrick Payne, in Abercrombie’s world. Still less is there space for the moral development of the sort that takes place in Ser Jaime Lannister, as his hunger for glory and incestuous sex are gradually replaced by his desire to simply keep an oath sworn to a dead woman. Martin’s characters are also more psychologically adult than Abercrombie’s; whereas Martin’s engage in sex, rapine, and experimentation without much hesitation, most of Abercrombie’s have the sexual maturity of a 13 year-old boy who fears to try kissing a girl.

Atmosphere: Both series are extraordinarily dark. The First Law is relentlessly morbid, while few series have ever begun with a more shocking scene than the one that involves both incest and attempted child-murder. But despite the prodigious body count of A Song of Fire and Ice, the darkness is leavened with occasional hope and one does not actually expect every character to end up dead. Abercrombie’s ruthlessness actually becomes less effective over time, as the reader gradually becomes disassociated from the characters due to the distraction of anticipating the horrible fate that will eventually befall them. Martin’s approach is more successful, as the contrast between dark and light creates a greater impact and is therefore more effective than uniform darkness. As for themes, however, Abercrombie at least has one with regards to the ultimate pointlessness of human action. Martin’s work contains little in the way of philosophical commentary; he is more of a pure storyteller for the stake of storytelling.

Realism: Abercrombie’s portrayal of combat and violence is far more realistic than Martin’s. Martin appears to think that lopping off limbs happens as a matter of course no matter how well a knight is armored and that jousts are more lethal than many historical combats. While he makes a nod towards the physics of decapitation when contemplating the challenges facing an executioner, the practical difficulties inherent to single-stroke beheadings magically disappear as soon as his characters enter melee combat. On the other hand, Martin is vastly superior when it comes to human religious sensibilities; even though few of his characters are, like Ned Stark, devout, the intimidating popular power of the sparrow movement shows that Martin isn’t simply ignoring one of the more significant aspects of human society. However, possibly the weakest aspect of The First Law vis-a-vis A Song is the way in which everything that happens in Abercrombie’s work ultimately turns out to the result of the pernicious plotting of Bayaz. Whereas all human action is futile, the devious plans of the mage seldom go awry. Indeed, a puckish critic might go so far as to suggest that Abercrombie’s series is more intrinsically religious than Tolkien’s, (although not Lewis’s), given the way in which the First of the Magi appears to be a stand-in for the First of the Fallen.

While I prefer Martin’s series at this point, it will not be terribly surprising if Abercrombie eventually creates an epic fantasy that surpasses Martin’s achievement, especially if Martin turns out to be incapable of finishing the seven books of the series. (We all hope otherwise, of course, but let’s face it, the thought has crossed the mind of every fan of the series.) And in addition to providing epic fantasy entertainment, both men provide the would-be writer with far more accessible models than the one provided by the grand master of the genre, J.R.R. Tolkien.

I had the impression that the Union is more akin to the Holy Roman Empire in inspiration. And an early modern feeling for the the time period. But I could be wrong- I only made it to the about the fourth or fifth chapter of The Blade Itself before I got tired of it.

Why do you suggest that Abercrombie and Law are more accessible models? Tolkien created a far more expansive and beautiful work in far fewer pages than the other two. I would make the argument that these very long series of books are a poor model for new authors and that fantasy, as a genre, needs more concise authors.

While i appreciate the effort of comparison of Abercrombie’s world to instances of our world, i think it’d be better off without. As it takes several aspects of different periods to liken it, i imagine it’d be more informative to just sum it up shortly.

I grant that there’s not much sexuality in First Law triology, but in Best Served Cold, which is ensuing in the very same world, it’s far, far from 13 year old maturity. It’s colored with the dark and gritty atmosphere, but even so. It also involves one of the best plot deception devices i’ve seen, literally having you backtrack a page or two if you’re not paying attention to what you’re reading. Especially because of this, i’d go as far as to say that Abercrombie’s take on it is superior to Martin’s. It’s hard to compare really, as their styles and worlds are so different.
There’s a few other points i partly disagree on, but this was the main one.

Thanks for pointing out unrealistic combat in SoIaF. It’s been years since i’ve read them and while i didn’t detect it then, i’ve learned a thing or two more about medieval combat since. I’ll have another run through Game of Thrones in preparation of the tv series and pay attention to it.
Speaking on the subject, while i don’t doubt Abercrombie’s earnestness in depiction of realistic combat, i’ve some doubts of the body count the main characters seem to accrue. While they are “heroes” of the story, is it not the whole message that there are no heroes?

The Union cannot represent the Holy Roman Empire, as that was a conglomeration of very loosely affiliated principalities. The battle tactics used are essentially Napoleonic, and the three day battle around a hilltop is somewhat remniscent of Gettysburg; Union is a term closely tied to the American Civil War and is a British term from the Napoleonic era.

I think Abercrombie and Martin provide much more accessible models than Tolkien because they invent so much less. It is much, much harder to successfully imitate Tolkien than to successfully replicate the other two. No one has done it yet with Tolkien, but we will see new series that surpass both Song and Blade, quite possibly Abercrombie himself.

The individual body counts in Abercrombie are not outrageous; the champion swordsman Gorst kills something like twelve Northmen in a battle at the ford in The Heroes if I recall correctly and this is considered highly remarkable. What is not at all credible, on the other hand, is the very high fatality rates in both series. Many authors appear to confuse casualty rates with fatality rates, but there are usually at least three wounded for every one fatality. For example, at the terrible, bloody battle of Gettysburg, only 3,155 were killed out of 93,921 Union troops while 14,531 were wounded. Medieval battles tend to lump the killed and wounded together and since few fantasy authors are competent military historians, it’s easy to see how they would tend to get it wrong.

I think what counts is if the author can sell the story and what happens in it, regardless if its historically accurate or logical.
A downfall any author faces, is if a reader is particularly knowledgable about a given subject that comes to play in a story, this particular expert is natually going to have a hard time swallowing something over your average reader.
I mean, I’m in IT, and I see it all the time when someone hacks into a computer network in a movie or book. I might smirk a little but I get past it.

[…] I noted in the comments last week, the bitter three-day battle of Gettysburg resulted 3,155 out of 93,921 Union troops killed versus […]