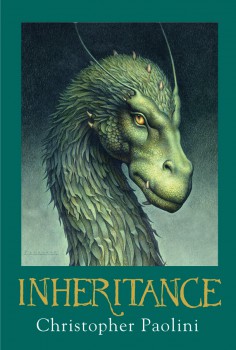 I share a lot of books with my kids. I have two sons, ages 15 and 13, and an 11-year-old daughter. As you can imagine, they have a wide range of tastes. It’s uncommon for two to enjoy the same book (or series), and virtually unheard of for all three to agree. They couldn’t even agree on Harry Potter – my youngest two enjoyed the books, but my oldest turned up his nose.

The solitary exception is Christopher Paolini’s Inheritance Cycle. All three have devoured every book in the series, and all three have been clamoring for more.

For years. The first novel, Eragon, famously completed when when Paolini was only 19, was released in 2002. My oldest, Tim, read it first, and immediately started asking me when the next one was coming out.

Eldest arrived in 2005, and by then Tim’s brother Drew had read the first one.  Within two weeks of Eldest‘s publication date, both of them were asking me to check Amazon.con for news of the third. Brisingr landed in 2008, and by then (of course) my daughter had leaped enthusiastically on the bandwagon.

It’s now been almost three years that I’ve put up with endless questions about the arrival of the fourth book (the most recent was last Saturday. Man, these kids do not give up). So it was with considerable relief that I saw news articles this week about the fourth and final volume, Inheritance, scheduled for release by Knopf Books on November 8, 2011. Thank. God. I thought I was going to be pestered about this book until retirement.

You’re on your own for a plot summary, or any further details. I’m already tired of hearing about this book, and I first heard about it yesterday.  Read all about it on Paolini’s website Alagaesia.com, or better yet ask a nearby teenager. They’re sure to have all the details.

I have not read them. I admit, I probably turned up my nose to them due to abject jealousy (19! HE WAS FRICKIN 19???!!! AAAUGGGHH!!! DOH! “I grow old, I grow old, I shall wear the bottoms of my trousers rolled…”) and then was not impressed with the movie, which really shouldn’t have had SUCH a say, but I was probably looking for say. Anyway, I’m glad your kids like these books.

Yeah, I was much unimpressed with the movie myself. Even my children were underwhelmed.

But they do still enjoy the books. Oh yes. And I have to admit, it has helped bring them to fantasy. Especially epic fantasy, with swords and such.

Neither of my daughters finished book #1 and have no interest in pursuing the series. Good taste comes to each of us at different points in our lives I guess. 😉

My students loved these books, so I tried to read Eragon. Could not make it more than three chapters before the execrable prose style felled me. Ah, well, Paolini’s surely passed the mark for that classic writing advice about how you need to write a million words of crap before you get good. Maybe the later volumes are better than the first. They couldn’t be much worse.

Do your daughters generally read fantasy? I wonder if having experience with fantasy makes a difference… my kids had not read a lot of epic fantasy before these books, and they made a great introduction.

How old are your students?

And when are you going to blog for us?? 🙂

John – Yes, both read fantasy. #1 read and enjoyed all the Harry Potters and Twilight but couldn’t get past halfway in Paolini. She also didn’t get into Dragonlance and has reread Twlight 2x.

Daughter #2 stopped reading halfway through the HP series, then read book #7 after the movie to see how the second half of the end goes. She has read all of Twilight, Vampire Diaries, some other vampire stuff, Maximum Ride, and numerous stand-alone or 2-book series. She wants to try Dragonlance but chose Salvatore’s Drizzt series first. Claire’s review of Novik’s work reminded me of that and I’ll recommend that series to #2. Oh, and #2 copy edits RBE titles…after they’re released. She’s done so well unfortunately that I think I’ll be hiring her to do that before release from now on 😉

OH, and #2 read 3 chapters in the first Paolini and tossed it aside.

Excellent! Do they care for SF at all, or just fantasy?

>. She’s done so well unfortunately that I think I’ll be hiring her to do that before release from now on

Not if we hire her first!

I’m from the the Eragon/Harry Potter generation.

I didn’t get into this series ( or Potter ).

I was reading much, much older stuff…

This had a following though with kids my age, or thereabouts.

Eragon was really, only popular with people whom had not read a lot of anything, not just ‘Modern Fantasy.’

Or that’s my impression.

Any ways, for ‘modern’ stuff from about that time I liked American Gods.

I wish we were the American Gods/Malazan generation, but whatever…Potter/Eargon it is…

Indeed. Good to hear you enjoyed the Malazan books.

What else were you reading, instead of Potter and Eargon?

…Lots of Alfred Tennyson and Arthur Machen rereading for some reason…