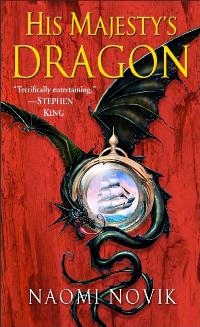 Oh, gosh! I’ve been reading Naomi Novik’s Temeraire books. My buddy (and dread Goblin Queen) Jessica Wick has been telling me I should read them for ages. And then the most fair and perilous Patty Templeton chimed in. And then my cool co-worker Janelle “I’m totally surviving the Zombie Apocalypse” McHugh started harping about them too, and I finally got a clue.

So I was all like, “FINE! I will read your 19th Century Dragons-as-Aerial-Calvalry in the year ‘O6 book, and I will see if it’s REALLY as good as all y’all are saying it is.”

Oh, it is. It is. Sea battles! Sea Serpents! Terrible storms! Travels to China! To Prussia! Blockades! Border patrols! Abolitionists and Assassins and fire-breathing Kazilik dragons, oh my!

I ordered His Majesty’s Dragon through Amazon.com and then I sort of ate it. And then I wheedled Patty (who works at a library to which I have no card) into checking out the next three books (Throne of Jade, Black Powder War and Empire of Ivory) for me (the latter of which I’m currently on). Last week, in anticipation of running out, I batted my not terribly impressive eyelashes at Janelle  (who happened to be going to the library that day) and asked if she might, just might, be willing to check out Victory of Eagles for me.

In the meantime, I ordered them all for our bookstore, so that I can hand-sell them  to unsuspecting customers in search of something bright and new and rambunctiously scrumptious in Fantasy. They’re sitting on my Employee Recommendation Shelf, right beside James Enge’s The Wolf Age, Terry Pratchett’s Nation, and Robin McKinley’s Sunshine. So they’re in good company!

“Is it hard to imagine a cross between Susanna Clarke, of Norrell and Strange fame, and the late Patrick O’Brian? Not if you’ve read this wonderful, arresting novel.”

Only, see, I liked these books even better than Master and Commander, coz there were actually WOMEN in the pages. Female dragons as well as pilots — and boy, does that disturb our doughty protagonist Will Laurence! Before he got accidentally bonded to his Imperial Dragon Temeraire, he was just your ordinary, average (awesome) naval captain, with all that being British, a guy, and a naval captain in the 19th century implies. His time with the Aerial Corps, but most especially with Temeraire, works on him, until by the fourth book in, Laurence thinks and acts in ways that surprise even himself. It’s wonderful!

But really. I’m not here to write an in-depth review. I’m just here to alert you. You can be stubborn like me and wait a year or three before taking my advice and reading these books. YOUR LOSS THOUGH!

This sounds like what Twain might have been suggesting when he said ‘Tolstoy carelessly neglects to include a boat race,’ after reading War + Peace.

There is a boat race?

…Nope! No boat race. So far as my brain recalls. Unless they are racing against time!

But there IS a PLAGUE!

The books, individually, are much more manageable than War and Peace, but collectively might give that tome a run for its money. At least far as a blunt weaponry goes.

I’ve not read Tolstoy. Yet. Is he as good as Bulgakov? 🙂

It is up to you to read him, and decide if you think he is ‘as good’ as Bulgakov.

I can’t do that for you and I won’t pretend I can.

It’s okay, that you haven’t read War + Peace though…I think Tolstoy himself gave up, ’cause it was too long, and boring…

I admire plagues as well. Seriously, I have ‘studied the history of plagues.’

I like the plague books I’ve read — have been meaning to read “Year of Wonders” for some time now.

Also, there’s one about the cholera called “Ghost Map” which I’ve been curious about.

I’ve read the first 3, thoroughly enjoyed the first one and highly recommended it (years ago I may add 😉 and absolutely adore the relationship developed between Laurence and Temeraire and the way Novik matures/d Laurence’s character. I will definitely finish the series…someday.

Your reviews are fun Claire — now get off the plague and back to the good parts!

Oh, and Claire? Peter Jackson optioned this series right after LotR: Return of the King wrapped. 🙂

I just finished VICTORY OF EAGLES last night! Jason — you… You have NO IDEA what you’re in for! Man! Laurence goes through the WRINGER with that one.

I’d heard about the Jackson thing in the random googlings, but now he got shanghaied into The Hobbit, and who knows if and when he’ll ever do the Temeraire books.

In the meantime, no one ELSE gets to, ’cause he’s got the option. Oh, Hollywood. At least he has a sense of authenticity and humor, so if he ever does do them, they’ll be grandy-o.