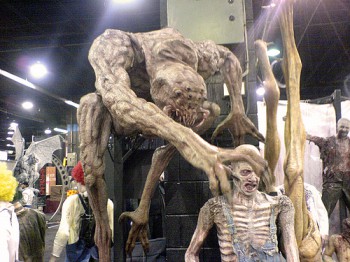 Yes, believe it or not, its time once again for the Halloween Costume and Party Show; the largest collection of Hollywood-style horror effects to be found in one place. Needless to say, this annual event causes just about as much activity in the underground offices of Goth Chick News as Halloween itself.

Generally held in Chicago, this year’s event has moved south to The America’s Center in St. Louis, meaning some well-thought-out preparation is in order. Having only rarely left my workspace unattended, sadly I know full well what has happened in the past when I’ve turned my back on the boys of Black Gate. Generally, it involves some manner of carnage being inflicted on my blender, my espresso machine or the barely acceptable unisex bathroom.

There was that one time when the espresso machine and the unisex bathroom ended up together, but I still can’t discuss that without needing a lie down afterwards.

So, with this in mind I will carefully remove all tempting objects out of the office to the trunk of my car  (including the super glue), make a pass through the local coffee shop drive-thru, and then I’m off to my most favorite event of the year.

If this is your first time hearing about the Halloween Costume and Party Show, it is the national trade show where everyone who is anyone in the Halloween and horror industry comes to parade their latest and greatest.

In past years it has also been the launch pad for entertainment projects such as Dee Snyder’s rock opera VanHelsing’s Curse, and Midnight Syndicate’s indy film The Dead Matter, as well as a draw for industry-related celebrities.

Unfortunately, it’s not open to the public. But trust me, I won’t let you miss even one eye-popping tid bit. 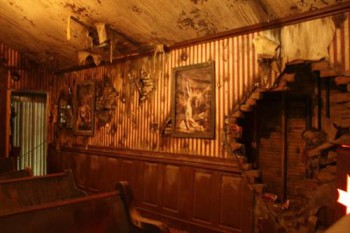 One of the amazing parts of HCPS is that is it a showcase for the crème de la crème of material effects artists. Not those wonder boys who work in CGI, but the guys who create true-to-life, tangible icky-ness that is often powered by computer.

Ever wonder where the high-end haunted attractions in your part of the world get their stuff? HCPS is the place.

What happens when all these creative (and slightly twisted) types get in one place is fake-blood soaked magic.

And in an effort to make the high-end effects accessible to even a neighborhood attraction, many of these companies are offering less elaborate versions of their wares for purchase by the public. So as a double bonus, the HCPS also becomes a fount of interior decorating ideas for Chateaux Goth Chick.

In addition to the haunted attraction components, HCPS attracts nearly every costume company in the US. This means the show is a first-look at what will be the hot themes by October, generally driven by the year’s movie releases.

I’m predicting pirates to dominate in 2011 along side the upcoming forth installment of Pirates of the Caribbean: On Stranger Tides.

Want a sneak peek? Have a look at some of the companies of interest this year (just to name a few): 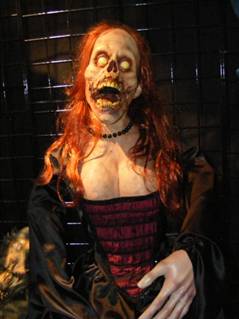 So watch this space for news from HCPS. Extraordinary exhibits may be posted live from the show floor over the weekend.  And check out coverage of past shows here and here.

Coming next week, coverage of the entertainment extravaganza that is C2E2 happening March 16-18 when I’ll be sitting down with the cast and crew of Boy Wonder and The Vampire Diaries.