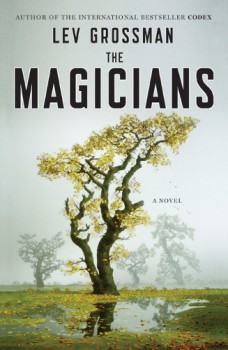 Lev Grossman’s The Magicians makes an admirable attempt at an ambitious premise: is it possible to use the form and structure of Harry Potter to tell a story about ennui, dissipation, and cynicism? What is the difference between the childhood wonder evoked by the “you’re such a special child” childrens’ fantastic literature — with its black and white morality, its uplifting sense of meaning and hope — and the obdurate, insistent messiness of real grown-up life?

The Magicians follows Quentin Coldwater, a brilliant, industrious high school student who spends his time working obscenely hard at schoolwork for ends that are not entirely clear to him, as he is selected for and matriculates at a secret school for wizards in upstate New York. The story self-consciously mimics such similar novels as Harry Potter and the Sorcerer’s Stone, except it equally self-consciously subtracts the moral clarity, the battle against ultimate evil, and the soul-building trials of its main character’s childhood.

Quentin Coldwater is a character that is probably familiar to many readers: talented, competent, motivated, but frustratingly directionless. Despite having been chosen by magnate schools throughout high school, despite being chosen by a magical college, despite the initiatory experiences he undergoes there, his destiny never becomes apparent. He succeeds at his schoolwork but still fails to find direction (taking as his major the magical equivalent of “Undeclared”), he flounders when he finishes school. His troubles are neatly summed up when, in his fifth year at Brakebills College of Magical Pedagogy, he asks his professors what he should do and they tell him: “Why, my boy, anything you want!”

This constitutes roughly the first two-thirds of the novel, and it is fantastic. The world that Grossman has created is eerie and inventive, the frustrating cycle of self-absorption in which Quentin finds himself is familiar and, in its way, heartbreaking. The novel here is marred only by a few awkwardly clunky “youthisms” — instances in which the author, in his attempt to recapture the language and interests of people in their late teens, doesn’t quite succeed.

There is a point, however, at which the main character’s solipsism stops being interesting, his childishness — instead of being painful and familiar — starts being irritating. There is a point at which it is hard to continue to forgive Quentin his youthful navel-gazing and to not want to reach through the pages and shake him by the scruff of the neck. This is about the same time that the narrative collapses, and Grossman apparently gives in to the temptation to abandon his premise and just write a regular old fantasy novel, complete with monsters, ultimate evil, magical quests, and meaningful destinies.

In the world of The Magicians, all “nerds” worth their salt are obsessed with a series of books called the Fillory and Further series. The world those books describes is a kind of especially-childish version of Narnia, and the fixation that young magicians have with it underscores their unwillingness to grow up, their refusal to accept the world the way it is. The preoccupation with a fictional fantasy land is at the core of what it means to be a wizard, The Magicians tells us — to believe in magic, and its attendant easy answers, is to refuse to accept reality.

Except, it turns out Fillory is a real place, really haunted by a terrible evil, and Quentin and his friends have to go on a real quest to save it. All the moral ambiguity that the characters imagined might persist in a “real” Fillory turns out to be false — no, it is okay, the bad guy is easy to spot, and it turns out someone has been guiding your destiny up until this very moment, anyway, so all of your self-reflection and insecurities were wrong, you see?

The novel is further harmed by an almost maddeningly ridiculous ending that seems happy to toss out the entire premise of the preceding pages. It reverses the cynical, downward trend of the book — a trend that would have made The Magicians depressing, but at least consistent. Instead, it leaves the reader with a sense that some cliché-besotted fantasy hack snuck into the printer’s and tacked the ending on without advising Grossman or his editor.

All of this makes it both difficult to recommend, and difficult to banish the urge to do so. The first two thirds of the book are so excellently plotted, so mysterious and compelling, that they throw the lackluster third act into stark relief and, at the same time, almost make it forgivable.

You performed more heroically than I could — you read the sucker! All of it. Of which, all of it, I could not stand. I read the first two chapters wanting to tear the pages out of the book. Every where else I landed within the book during a random skim hoping that I was wrong — well it was worse than that.