While fantasy on television has suffered a bit over the last couple of years, films are doing better than ever. Animated films, especially, seem really able to grasp the complex worlds of fantasy. Looking over a list of 2010 films, some real highlights come to mind. What’s amazing is that the films oriented toward adult audiences, such as Clash of the Titans and Alice in Wonderland (both reviewed in the upcoming Black Gate #15), were almost entirely underwhelming, while the young adult films contained some surprising (and not-so-surprising) gems. I previously spoke about Scott Pilgrim vs. the World (along with compelling follow-up commentary by Magille Foote), so I’ll focus on some other films from the year.

How to Train Your Dragon

Hands down, of the fantasy films I’ve seen this year, my favorite was the unexpectedly charming How to Train Your Dragon. Any film with vikings and dragons guarantees to entertain, but I did not anticipate that this film would tug at the heartstrings quite as much as it does.

The main character, Hiccup, is the scrawny young son of a Viking chieftain who decides that rather than killing a wounded dragon, he will instead befriend it. Out of this strange new friendship he calls into question everything he’s ever known about the Viking way of life … and about a threat that’s even more deadly than the dragons they’ve encountered in the past.

It’s really a wonderful coming-of-age story about standing up for your principles even when it’s difficult, when everyone around you believes that you’re not only wrong, but outright foolish.

How to Train Your Dragon is reviewed at length by fantasy author Alana Joli Abbott in the upcoming Black Gate #15, so I don’t want to steal too much of her thunder.  (Alana also does some compare/contrast with the book. It is very different from the movie, so the review is a worthwhile read even to those who have seen the movie already.)

My one complaint is that the How to Train Your Dragon DVD/Blu-ray combo does not include a digital copy. (Also, the “Legend of the Boneknapper Dragon” short is included only on the blu-ray disk, not on the DVD disk.) This isn’t necessarily a big deal, but in this particular market, it seems like a careless oversight. Children’s animated films are great for digital copies, so that the iPad can be used to entertain the kids on trips. 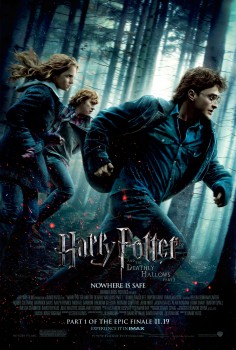 Harry Potter and the Deathly Hallows – Part I

I read Deathly Hallows when it first came out and, honestly, haven’t done a re-read of it since. (Historically I’ve re-read the previous Potter book just before the next one came out, but haven’t had time to do a full front-to-back re-read since the final book.) So, aside from the general plotline, I didn’t really know what to expect from the film. I remembered that the book was thick, but couldn’t remember what happened enough to see how it justified two full movies. The plot basically seemed to consist of a lot of hiding in the woods with some brief action sequences in between. It seemed like it could have been condensed down into one 3-hour film easily enough and be done with it.

Now that I’ve seen it, I do definitely believe they’ve done the right thing by splitting it up as they have. The film does an excellent job of setting up the climax by clearly establishing that Harry is in the losing position. Voldemort is ascendant, at the height of his power, while Harry is stuck hiding in the woods with only his two best friends (and for a time, only one of them) for companionship. This means that when the final film comes out, the films in sequence will portray the same sense of impending doom that the books held.

Had they condensed the book into a single movie, they’d have been forced to skimp out on the character development in favor of getting all the necessary action sequences and plot points covered. I’ve seen a rushed finale before, where complex character interactions were chucked aside in favor of flashy combat scenes, and I’m glad to say that this is no Harry Potter: Revenge of the Sith.

(Note to any aspiring spoofers, such as Robot Chicken: I want billing for this idea.)

(Note to self: There are no original ideas.)

Instead of the rushed finale that we’re accustomed to from epic film adaptations, we have been granted a rare thing – a fantasy epic that lingers in the reader’s mind from the screen the same way that it does from the page. Whatever else may be true, I think one could argue that Harry Potter does about the best job possible of capturing the total essence of what made the books great and transferring it onto the screen. 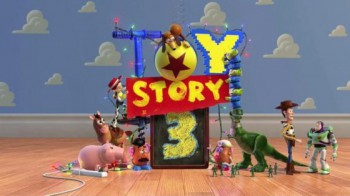 Pixar never ceases to amaze me with their ability to take a premise which seems lame and turn it one of the best films out there. Toys that walk and talk? An ant colony tormented by grasshoppers? A fish that gets lost? Talking cars? An old fart flying his house to South America with balloons?

(Honestly, the only Pixar film that hasn’t completely won me over is Ratatouille which is actually a mildly cool premise but, in my opinion, poorly executed. The rats are fine; it’s the humans who ruin that film.  I didn’t find any of the human characters compelling on any level.)

Toy Story 3 is the final chapter in the toys’ relationship with their boy owner, Andy, who is leaving for college. The previous two films had it easy by comparison, since the toys were working toward the fairly clear and noble goal of bringing joy to the heart of a boy, this film gives them a bit of an existential crisis: What should they do when that role has been completed and they’re now expected to sit in the attic, potentially forever?

The toys get accidentally donated to a daycare center. Throughout the course of the film, the toys become divided over what the best course of action is: to return to Andy or allow themselves to be used as playthings by these new children? And things get only worse when it’s revealed that the daycare isn’t all that it seems to be.

This stupid movie about a bunch of toys is actually heart wrenching! Every adult I’ve spoken to about the film has been in tears during the last few minutes. (My five year old son, who loved the movie, could not figure out why I was crying at the end.)

Disney/Pixar, being the master of marketing, does have a Toy Story 3 DVD/Blu-ray + Digital Copy combo pack edition, meaning that I have the incentive to purchase it because it will be viewable on any form of media player that I possess in the foreseeable future. 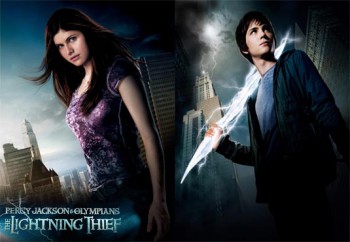 This isn’t quite as brilliant a slam-dunk film as the earlier films in this list, but it was surprisingly good. Maybe it was because I had relatively low expectations. From what I can gather from the reviews on Amazon, and the few people I know who have read the book, it doesn’t really match the book too well.

The basic premise of the film is that the Greek gods are still alive and well and fornicating like bunnies. The main character in the book, Percy Jackson, is Poseidon’s illegitimate son with a mortal woman. For those not well-versed in Greek mythology, this makes Percy Jackson a demi-god … and a fairly powerful one, since the big three gods in the film’s version of mythology are the brothers Zeus, Poseidon, and Hades. Percy doesn’t know this … until he’s accused of stealing Zeus’ lightning bolt, which will trigger a war among the gods unless he can find the lightning and return it to Zeus in time. He’s joined by a satyr assigned to protect him and the daughter of Athena (shown in the picture above). Percy has more serious concerns: trying to rescue his mother from the underworld, where she’s being held captive by Hades.

The film was good enough that I want to read the books. (My interpretation of the Amazon reviews is that the really clever parts came from the book, while the somewhat lame parts were a result of translating it onto film.) I think it’s worth watching, but feel no need to own this movie. It is, unfortunately, not available for rental through Amazon Video on Demand, though it is out on both DVD and Blu-ray, so check iTunes, Netflix, or your local rental-location-of-choice.

Toy Story 3 has one horrible issue, it was rated G. Yeah, that means General, and there was no way this movie was for children under the age of at the very least 5. I’ve never seen a film in which more parents had to pick there children up and take them from a theatre. I did this with my 4 year old son. The movie features a torture scene for goodness sake, and the villian is even saved by kindness only to turn on the main characters and try to kill them anyway. What message does that send to children watching? IMO Disney bought a G to make more money and that’s sad. Put a PG on this and I’ll give it a nod, although I still think the movie is a tragedy for the franchise with its storyline.

I must take issue with your statement that Burton’s ALICE IN WONDERLAND was “underwhelming.” I completely and utterly disagree. I found the movie to be visually dynamic, fantastically thrilling, full of whimsical humor, and a refreshing dose of no-holds-barred SWORD AND SORCERY. The entire plot revolves around Alice getting the sword that will enable her to slay the dragon (i.e. Jabberwocky), and the final battle is just terrific. When it comes to being plunged into a completely fantastic world that lives and breathes in a thousand different colors, you can’t ask for much better than what Burton has done in this film. Make no mistake, this was a sword-and-sorcery movie.

[…] week, I discussed my favorite fantasy films of 2010 and realized that, surprisingly, they were overwhelmed by young adult films, and even animated […]

[…] be: funny, surprising, original, and absolutely riveting. See Andrew Zimmerman Jones BG review here, in which he calls it “Hands down, of the fantasy films I’ve seen this year, my […]

[…] was one of the best fantasy films of the last decade. Andrew Zimmerman Jones reviewed it for us here, calling it “Hands down, of the fantasy films I’ve seen this year, my […]