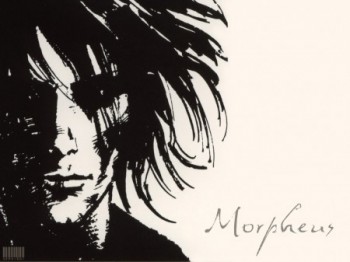 The About.com Science Fiction site is tracking 12 current shows. Three of these shows are vampire shows (The Gates, The Vampire Diaries, and True Blood – also, arguably, Being Human), and I’ve had my fill of vampires with my previous addiction to the wonderful Buffy: The Vampire Slayer and Angel. This new generation of vampire television just doesn’t do it for me.

Sandman To the Rescue

According to several reports (see list below), Warner Brothers is working to acquire rights to The Sandman from DC Entertainment (both owned by Warner Bros). There have been rumors of a film and an HBO show in the past, so this is hardly a done deal, but something like The Sandman would be great to see, especially if done right.

The Sandman focused on the character of Morpheus, who was one of the Endless – creatures that exist above and beyond even the gods themselves. Morpheus was Dream, the king of the Dreaming, the embodiment of humankind’s deepest levels of imagination. The other Endless include Morpheus’ siblings Death, Destruction, Desire, Despair, Destiny, and Delirium (formerly Delight – long story). The premise gives immense potential for a rich, dynamic series that could explore subjects in very unique ways … in the hands of the right creative team, of course.

One problem that I see is that, as of now, Neil Gaiman doesn’t appear to be involved with the project. Gaiman’s one of the biggest names in the field, and Sandman drips with his personality and creativity. The quirky, charming, and dark approach to deep mythological subject matter has become a hallmark of his career.

The good news is that one of the top names rumored in the running to lead the project appears to be Supernatural creator Eric Kripke, who has a lot of the same bona fides. I’m a big fan of Supernatural, which started out slow but ramped up into an amazing world-shattering series that still somehow manages to focus on the internal family dynamic of a pair of brothers. (In fact, the fate of the world often rests on that very dynamic.)

My opinion is that a show that has creative influences from both Kripke and Gaiman would be virtually unstoppable, but I’m not sure if Kripke alone could counter-act a strong fan resistance against Gaiman’s absence. Kripke himself seems to be aware of this, as indicated by The Hollywood Reporter:

Kripke has been described as interested in tackling an adaptation but cautious because the comic book has such a passionate following and is held in such high regard. It’s the kind of series where each production decision, from casting to script to design, would be scrutinized by devotees.

Kripke is certainly aware of how devoted fans can be, since an episode from Season 5 of Supernatural focused on the main characters at a convention in their honor. (It’s a long story. There’s this prophet who writes horror novels about them, you see, based on his visions.  Okay, so it wasn’t that long.)

Of course, before we reach the point of devoted fans up in arms, this series will have to actually be made … and previous efforts have fallen apart before ever reaching the screen. I, for one, am crossing my fingers that this one makes it through the chaotic world that is television politics.

The reasons for this will hopefully become clear, because in the weeks to come I’m going to begin following new episodes of Supernatural on this blog. While Kripke stepped down at the end of Season 5, I’m hoping that the show will continue to honor the great characterization he established as its heart and soul.

And if The Sandman is about anything, it’s about hearts and souls … and dreams.