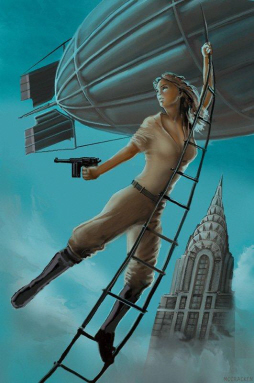 On the whole, I’m not opposed to traveling with boys. Generally speaking they are amusing companions particularly when refusing to ask directions, thereby winding you through mildly interesting places while attempting to locate the desired destination sans MapQuest. Along the route, in an effort to distract their hapless passengers from all the pointless meandering, they can generally be counted on for lively and revealing conversation about former girlfriends, prior arrests and entirely icky things done in frat houses; all of which become prime blackmail fodder for later use.

Therefore, I did not immediately dismiss Howard’s idea of coming along on a road-trip to the Atlanta Dragon*Con in the Black Gate zeppelin via the Canadian Rockies, Baja and Rhode Island. Frankly by the normal standards, it’s about as much planning as I’ve ever know these boys to do. Besides, just seeing the look on John’s face when he heard the whole plan would have been more than enough incentive in and of itself, but when I learned the zeppelin had enough cargo space to house the new batch of interns plus my blender, I was in.

Now several days into the trip we are, of course, hopelessly astray of the original brilliantly planned route, E.E. Knight keeps going on and on about the steaks at Le Cheveux Club Pour Les Hommes and how big his Mauser is, and in an attempt to get cell coverage John insists on going topside in spite of the turbulence, then throwing up over what I hope is Cleveland but at this point could just as easily be New Mexico.

And the overall conditions in this zeppelin are starting to deteriorate.

Though my request for an interior, windowless cabin was as always, immediately granted without discussion, I soon discovered the privies were uni-sex. Originally this was passed off to me as some balderdash about equality, but what I soon discovered is that all the fixtures were removed from the other bathroom to make more storage for back issues of Black Gate. Howard then tried to tell me they had to reroute the water lines to accommodate my wet bar but I’m having none of it. 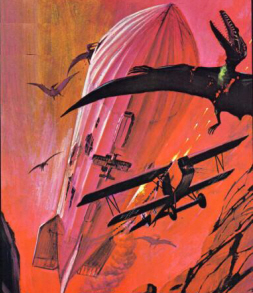 The upshot of this arrangement is that, on the few occasions I happened to be reading a juicy tidbit about the latest indy horror film on my Blackberry and not paying full attention, I found myself in a highly undesirable pose due to the toilet seat being left up. And while I’m on that subject, you’d think E.E. Knight’s aim would be a tab better considering he’s inseparable from that Mauser.

Under the guise of keeping a constant and uninterrupted watch for evil doers set on undermining our journey (good luck following us by the way, whoever you are), the boys have all but given up on basic hygiene, spouting some unified babble about the body’s amazing self-cleaning ability and how adrenaline and beer are natural detoxifiers. The result is that the entire zeppelin smells like an old sweat sock, and trying to counter that with my Nag Champra incense sticks just keep setting off the fire alarms.

So when the interns came with their eye averted this morning, to inform me we were out of tequila and John had subsequently used my blender as spare parts to build a WiFi booster antenna, I decided it was time to go. I’ll be availing myself of the zeppelin escape pod when we eventually pass over New Orleans (and odds are that we eventually will), so alas, I will not be seeing you at Dragon*Con. Though I am known for my tolerance of all things stomach-turning, the odor now wafting through these hallways would cause a cadaver dog to retire.

Adieu colleagues! May fair winds blow you to your Atlanta destination. And if they do, for heaven’s sake, open some windows.

You are the bravest woman ever to fly in an aerostatic aircraft with a bunch of wild-eyed, mouser-toting, robot-loving, sword-swinging barbarians. Keep up the good work!

May your enemies have forgotten their antiaircraft guns and incendiary bullets at home, may the toilet seats hereafter ever be politely put down, and may you reach Dragon*Con gorgeous, triumphant and, uh, uncombusted.

I’ll have you know I did not splatter the toilet.

I pee in the sink.

Turning around in that tiny locker-sized space is tiresome because my cutlass becomes wedged among the mops and insecticide sprayers and I make a very undignified exit when I trip over my own blade. Using the sink means I need only face one direction while in there, which is just as well because the quality of the dirty limericks scribbled above the toilet paper has gone downhill since Ward found that box of sharpies.

I’d look to James “Buckingham Fountain” Enge’s asparagus-scented hands, my dear. The sticky floors have nothing to do with me.