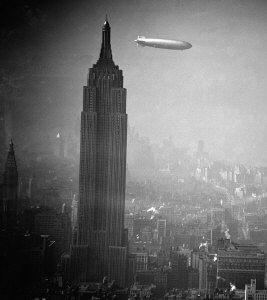 I arrived at our building this morning to find people milling around in the street, pointing into the air. A fat, smoke-shrouded zeppelin was moored to the Black Gate rooftop headquarters.

“Oh God, no,” I thought. “I was sure Howard was joking. That thing is a death trap.”

Howard wasn’t joking. I took the elevator to the roof, punched in the secret code, and stepped out into chaos. Minions were scurrying everywhere, loading cargo into the airship. John Woolley, our graphic designer, was stuffing our brand new 12-foot banners into a well-worn travel case from the 1920s. I caught him just as a strong gust of wind damn near took him over the edge, and we got it stowed into the cargo hold.

I found Howard commanding operations. “Are you crazy?” I shouted at him. “That thing will never make it to Atlanta. It can barely do five knots!”

Howard did look slightly crazy, dressed in jungle fatigues and standing on a desk. He was clutching a worn parchment. “Isn’t she beautiful? Jason Waltz completely re-built the engines. She hit Mach 2 just after midnight last night during our test run!”

I tried to visualize a zeppelin breaking the sound barrier, and failed. “But… her nautical systems are over seventy years old. We’ll get lost five miles outside Chicago!”

“Already taken care of,” Howard said with a grin, brandishing the parchment. He unrolled it to reveal a highly detailed topographical map, painstaking rendered by hand on what looked like yak hide. “John Hocking sent me this yesterday. He’s got our route completely laid out.” He pointed to a thin red line that snaked a tortuous course from Lake Michigan to the Canadian Rockies, down to Baja, around Providence, Rhode Island (home to H.P. Lovecraft), and finally to Atlanta.

I gaped at the map. “You’re joking. I’ll never be able to follow this!”

“No offense, but no one trusts you to pilot The Harold Lamb since you damn near crashed it trying to get to a Twilight Tales reading,” Howard said, leaping off the desk. “Bill Ward is piloting. We leave in two hours.”

“Two hours?! We’ll never get the control codes to the Black Gate supercomputer transferred in time –“

Howard was already striding along the roof, shouting instructions to the minions as they used pulleys to swing boxes of back issues into the cargo hold. I struggled to keep up as Howard called back over his shoulder. “You didn’t read my e-mail, did you? Control of the entire global corporation was transferred to Ryan Harvey and C.S.E. Cooney on Tuesday. They’ll be running New Epoch Press while we’re at Dragon*Con.”

And so, I’m typing this while clinging to a buoy line as we sail past the Hancock building in downtown Chicago, trying desperately to get a wireless signal.  I can see Jason furiously shoveling coal into the reactor, and I can hear Sue “Goth Chick” Granquist shouting to the minions to bring her a Pina Colada.

I’ve lost control of the corporation I spent the last decade building, and I can only hope Rich Horton and John R. Fultz can keep an eye on Ryan and C.S.E, and prevent them from carrying out any hostile takeovers while I’m gone. Or throwing another one of those parties that caused me two court appearances.

But we’re on our way to Dragon*con in Atlanta, with a cargo hold dangerously over-crammed with Black Gate back issues, vintage science fiction and fantasy paperbacks, and new releases from Rogue Blades Entertainment.  Best of all, I just heard from the control room that we’ve received a coded transmission from our forward operatives, James Enge and E.E. Knight, and under the cover of night they’ve succeeded in creating enough crop circles to signal where it’s safe to land. They’ll meet us on the ground and guide us into the Exhibit Hall of the Marquis Ballroom at the Atlanta Marriott Marquis convention center.

With luck we can avoid the diabolical agents of our arch enemy, the evil Baron Gordon van Gelder, and his relentless zeppelin-destroying fighter wings.  With luck.

We’ll try to check in at semi-regular intervals as we skim just below the stratosphere, stopping at night to hover over La Quinta Inns to steal wireless. And if you’re going to be at Dragon*Con next week, drop us a note to let us know!

But John! I’m never HOSTILE! If I ever staged a coup, you can be sure it would be elegant, or at least GOOD-NATURED!

I totally love this blog. My favorite by you EVER.

I’d be there, if only I could afford the entrance fee. Nonetheless, I’m with you in spirit! And I will be in ATL at the Decatur Book Festival (which is free) the same saturday as the Con, if anyone wants to say hello.

It’s a pity you’re not coming with us, C.S.E! You could entertain us during slow moments in the booth, and help wow the crowd at all other times.

But, alas. You’re stuck maning the ship. Don’t change the name or anything while I’m gone, ‘K? I don’t want to come back and discover the magazine is now called BLACK UNDERGARMENTS or something.

I know what you mean about the entrance fees. Sorry you can’t be there!

I’m more worried about all the costuming. I have nothing to wear, except black t-shirts. Howard says I need a Slave Leia outfit… is that true?

Alfred, you are incorrigible!

The only reason any of us put up with you at all is that you have cool stuff like zeppelins and yak maps.

Obviously one must excuse your more outrageous comments. The few days remaining before Dragon*Con must be to you like the week before Christmas is to your average five year old.

Besides, I could only help out at a Black Gate table again if I had my goblin girls and tattooed heathens with me. After all, when a girl sits between John O’Neill and Jason Waltz, one is in danger of being chafed and teased quite out of existence. I have five brothers, thank you, and it is QUITE enough.

I do wish you the grandest time that can be had without – yours truly – C.S.E. Cooney

Woo — let’s do this thing! Give me ramming speed!

Somebody wrest the controls away from Ward!

[…] about our expedition to Dragon*Con via the Black Gate zeppelin, the Harold Lamb. John described the start of our journey just after we departed the Black Gate rooftop headquarters […]

[…] as I’ve ever know these boys to do. Besides, just seeing the look on John’s face when he heard the whole plan would have been more than enough incentive in and of itself, but when I learned the zeppelin had […]

[…] bloggers, like Sue “Goth Chick” Granquist, and our fancy pilot, Bill Ward.  During our trip to Atlanta, I’m stuck down here in engineering, sharing a tiny cabin with Jason Waltz and John […]

[…] gentlemen staff of Black Gate tirelessly seeks out ways to entertain you. There have been cross-country zeppelin rides and waist-high stacks of manuscripts to pour over, seeking only the crème de la crème of stories […]