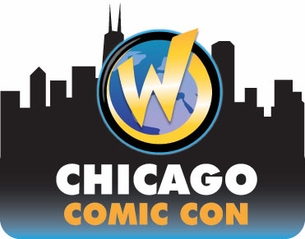 Have you ever woken up in an extremely good mood, found you were left enough hot water for a skin-peeling shower, stepped on the scale and found it down two pounds in spite of the bacchanalia of the night before? Have you ever leapt out of bed feeling euphoric and thought, “I really love my life?”

For me, the sun rose over the Chicago skyline last Saturday and found me gleefully clutching my press pass to the Chicago Comic Con.

It was about to be one of those days.

Last weekend, Wizard World made the Chicago stop on its nationwide tour, bring pop culture, comic books, toys and general weirdness to the Windy City. I brought my good friend and photographer Mr. Disney along, not only to help capture every precious moment on film, but to assist in with the non-stop stream of snarky commentary that was unavoidable at an event such as this.

Let me say up front that I don’t condone outright meanness, having been the subject of playground abuse for most of my school years.

However, when grown men who have clearly spent a lot of meals at fast food restaurants, insist on wedging themselves into spandex Starfleet uniforms, I’m afraid I have to put that in the “begging for it” column.

We must be aware of our own limitations after all.

That being said, a pop culture show of this kind indeed comes fully equipped with all of the standard fare you would expect.

I will therefore refrain from boring you with a run down on the anticipated and, instead, tell you about some of the things I found entirely unanticipated and highly intriguing for that exact reason.

For starters, I had the distinct pleasure of chatting with writer and illustrator Mark Kidwell. If you don’t know him, he’s a graphic novelist who famously created Fangoria’s first horror comic Bump back in 2007.

His new venture for Castle Rain Entertainment is entitled Jack the Lantern; War of the Soul which is cool enough in and of itself.

But Mark let me in on the little-known tidbit that one of our favorite horror effects dude, Rob Kurtzmann (recent of The Dead Matter), is currently in preproduction for making Bump into a movie.

This hasn’t even made IMDB yet, so stay tuned.

This was a comic book show after all and frankly, I did not have an appreciation of how serious this topic was to collectors until I heard two guys almost come to blows in the food court over which other superhero appeared in a comic with the Green Lantern (it was The Green Arrow, but I had to look it up). Therefore I couldn’t go to a show like this without picking my favorite comic.

The honor goes to Bad Kids Go to Hell. We first stopped at the booth because it was manned by several skinny girls in skimpy Catholic school uniforms which Mr. Disney seemed to find immensely photo-worthy.

However, after spending a few moments with creators Matthew Spradlin and Barry Wernick who came up with this idea during the last Hollywood writer’s strike, I had to admit they are onto something. I’m not the only one who thinks the Bad Kids Go to Hell graphic comic is disturbing and hysterical in equal measure.

It too is being turned into an indy movie coming to theaters in the summer of 2011.

However, just as I was hitting my stride with colorful comments aimed at Mr. Disney for taking up several megabytes of space on the SD card snapping the bad Catholic school girls, low and behold I am reminded again why I’m having one of those Christmas-morning-kind-of-days.

We round the corner to find the Utilikilt booth replete with display male models. Yep, you read it right guys… kilts; made of hard-wearing fabric for you construction and outdoor-sy types, with lots of utility pockets. They come in tan, brown and camouflage pattern for hunting.

This isn’t, apparently, a joke of any kind but try telling that to Mr. Disney.

Actor, stuntman and local hottie Andrew Staton (pictured on the right) was happy to show me how even roofers could wear the Utilikilt thanks to the handy privacy snaps that basically turned the kilts into a pair of shorts.

Oh yes, this is a good day indeed.

As with all the Wizard World events, the Chicago Comic Con dedicated a lot of show floor square footage to the comic artists themselves.

It was hard to choose favorites among all the serious talent on display but in the end it came down to one artist and one photographer, both of whom were doing something truly unique.

Ant Lucia, who amusingly enough is an accountant by day, is the intrepid creator of Spookshow Pinups. Imagine the pinup girl images of WWII with a Universal Studio horror movie twist.

It’s interesting and fun with just enough creepy to make the cut for Chateaux Goth Chick (the calendar for sale on the web site, is particularly awesome).

Inspired by a YouTube posting showing an interview with an Islamic cleric declaring Mickey Mouse is a tool of Satan, anti-establishment photographer Matt Michael created a black and white “Death to Mickey” series, each photo depicting the mouse meeting an untimely end.

You know it’s good when even Mr. Disney saw the humor in it.

I need not describe further because whatever perverted thing you’re thinking… you’re right.

Contact Matt via his web site to purchase your own conversation pieces.

And last, what would any pop culture trade show be without celebrities?

And this one was chock full, with too many to list.

However, here are the ones I was especially excited to have rubbed elbows with, even for a few moments:

This isn’t everything, but there are some people I met who proved enough interesting that I’ll write about them separately.

Stay tuned for my interview with indy horror film writer and director Wyatt Weed about his new flick Shadowland.

Have you attended a Wizard World event, and did you wear spandex?

If so, post a comment and, oh please, a picture; or drop me a note at sue@blackgate.com.

The Bad Kids guys were awesome. I met them too. Story line is spot on. prep kids get what they deserve. It will make a great movie. Can’t wait!

[…] few weeks back at the Chicago Comic Con, I had the pleasure of meeting the cast of Shadowland, a new indie horror movie written and […]

[…] style to traditional pen and ink, and meet the creative minds behind both popular super heroes (last year I got to meet Gary Friedrich, creator of Ghost Rider) as well as emerging new […]