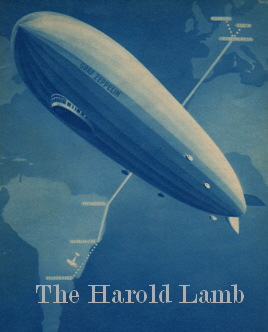 There’s a temporary lull in operations and the skies are clear over Oklahoma, so I thought I’d take the time to set the record straight about our expedition to Dragon*Con via the Black Gate zeppelin, the Harold Lamb. John described the start of our journey just after we departed the Black Gate rooftop headquarters Thursday.

Those of you who know publisher John O’Neill are aware that he has a tendency to exaggerate. For instance, he stated that the zeppelin is capable of Mach 2, but it usually maxes out around 1.5. He’d probably report that we were attacked by a flock of cybernetic pterodactyls, but in truth it was really only a half dozen, and Bill Ward and I took out most of them with the electric railguns. John was only blown back a few feet when the aft railgun exploded, too, so just nod politely if he tells you he was smashed into the hull and stunned.

I really wish John hadn’t broadcast our route, because I’m afraid it’s attracted unwanted attention. I’m fairly certain Dr. Zaius sent the cybernetic pterodactyls after us, but John Fultz tells me he sent mocking letters to both Aquaman AND the Legion of Doom on Black Gate letterhead, so there’s just no telling. Still, we’re prepared for pretty much anything on our journey, and we’ve decided to stick with the plan.

Now I thought I’d take a few moments to respond to some questions that have come in during our trip.

Question 1: What’s up with your route? John said you were going to Buenos Aires on the way to Atlanta from Chicago.

Answer: Some of the crew have also inquired — rather loudly, I’m afraid — about the wisdom of John Hocking’s suggested route. But I’m confident in Hocking, and he hasn’t steered us wrong yet. Except that time he got Lima, Illinois confused with Lima, Peru, and that could happen to anyone.

Question 2: Why did you take a zeppelin to Atlanta instead of a car or something?

Answer: It’s true that the Black Gate hydrofoil is often our preferred means of travel, but the zeppelin can fit a lot more cargo, and it’s definitely more comfortable for longer trips. Besides, Claire isn’t through repainting the pin stripes after she ran over that swamp demon.

Question 3: I’ve heard that you’re now accepting vampire stories. I have written three novel length vampire stories set in a shire analogue. Would you like to see them?

Answer: We’re not really interested in vampire stories unless they are very emotional and sensitive, and you’re a fantasy author who happens to own a cat, in which case you should send your story to John straight away.

Unfortunately, that’s all I have time for. We’ve just picked up an object on our long range oscilliscope that’s closing fast. Ryan Harvey and John Fultz have run an analysis of the image I transmitted back to headquarters, and they’re concerned that it might be fungi from Yuggoth, or possibly Gamara. One of us will check back in the next few days with another trip update.

Excellent name for the zeppelin.

If the fungi starts sprouting tentacles, I suggest immediate evacuation. Did you remember to store emergency gear like parachutes and rocket packs?

Zaius swears he didn’t send the pterodactyls, but he said the same thing about the three pounds of thin-sliced baloney I found decorating my car interior on the hottest day of August last year.

I checked the emergency stores, but instead of parachutes, I found the whole compartment stuffed with ADVENTURE pulps.

John, you really need to start reading your e-mail. You would then know that there is no need for parachutes because Scott Oden sent us a case of grav belts. Those are those BELT-SHAPED objects hung on the back of every chair. Sheesh.

I didn’t get a chance to properly calibrate those grav-belts, by the way. If the polarity is reversed . . . well, if that happens, let’s hope you’re bailing out over the organic marshmallow fields of central Afghanistan! I am hopeful that my galley slaves can get me to Atlanta in time for the festivities . . .

[…] can indeed verify that Howard von Steppenwolf-Jones’s fearful presentiment about the revelation of our route is correct. We are compromised and our mission imperiled. While […]