The world is a miracle, unfolding in the pitch dark.
— Barry Lopez, “The Mappist”

Just because you can travel to a place doesn’t mean you can know it.
—Alan DeNiro, “Salting the Map”

Like most things with us fantasy readers and writers, it started with Tolkien. 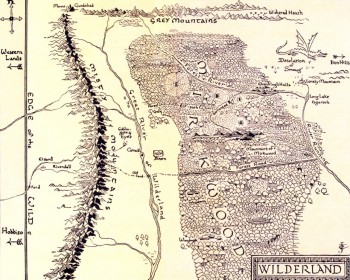 I saw the map at the beginning of my now-battered Ballantine version of The Hobbit all those years ago. The book had two maps in it, for crying out loud — my eleven-year-old self had never seen such a thing. I wondered if there’d be some sort of quiz at the end of the book — was Mount Gundabad at the northern or southern tip of the Misty Mountains? (No fair peeking!)

I can’t tell you how many times I drew and re-drew that map. I think I even tried to recreate it on an old Apple II computer, using BASIC (ouch, just aged myself, big-time). I studied it, wondered about those Woodmen living on the western border of Mirkwood, and of course traced the path taken by Bilbo and the dwarves on the way to their final meeting with Smaug the dragon.

And then I got a copy of The Fellowship of the Ring and saw how that little slice of the world from The Hobbit fit into the much bigger world of Middle-Earth, and I was hooked. Forget sketching the map of the land — I wanted to live there! (Orcs and wargs and all.)

What is it about maps?

Maybe it’s the love of hidden treasure, the scavenger hunt, the good ol’ X-marks-the-spot from the pirate maps of old. Or maybe it’s the thrill of dropping into an alien world, with only that map in the front of the book to help you familiarize yourself with the world. You sense the logic of the world (and start to trust the author) when you start matching up places on the maps with those names so casually dropped in the novel.

As a reader, you start to make that world your home, and that map is your companion. It’s a set of rules in a world that initially makes no sense.

So — as a writer of fantasy, do you need a map for your story or novel?

My answer is: It certainly helps.

Look, when you’re telling a story, you’re juggling about sixteen, maybe seventeen balls at once. Your characters are talking, interacting with the locals, fighting, walking, drinking, learning, and more, in a world of your devising. As the author, you certainly don’t want to get lost.

So sketch out a map of where the tavern is in your city as well as the river that bisects the city. Figure out where those mountains are, and how far the nearest swamp is. Get it straight in your head by sketching it out on paper. The last thing you want to do is get your reader frustrated with your world, and start distrusting you as a writer. Even if your story or novel won’t come with a map for GPS-minded readers to refer to, make the map for yourself.

Just remember that the map doesn’t have to be perfect. Doesn’t have to be of the same impeccable quality as those folded masterpieces that fall out of each issue of National Geographic each month. What your map has to be is functional. 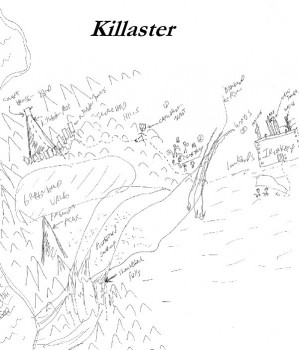 For the piece Jay and I wrote for Black Gate 14, “Devil on the Wind,” I had to create the rough working map you see to the left (I’m cringing now). I’m curious — does it look like anything you’d imagined from the story? We used the map to get the sense of scale and distance traveled by our two main characters.  It’s not a polished map by any stretch of the means, but it kept Jay and me from describing the mountains in the west in scene two, and then having them jump to the north in the final scene. The map help tells the story, in a way.

(I also have this urge to draw a red line on this map and any other I encounter in books, showing the path taken by my adventurers. I blame the Indiana Jones movies for that. )

Author Holly Lisle has a great primer on creating maps over at her website. What I really like is her tip to just draw your world, and don’t try to erase any mistakes you may make with your cartography pen (or your #2 pencil, whatever you prefer). The mistakes, she says, are “a treasure-trove of story ideas waiting to happen.” I dare you to read this entry and NOT reach for some colored pencils or markers. You’ll feel like you’re missing out on all the fun, otherwise.

Some other great map resources you can use for inspiration include the Map Room and the Strange Maps blog. Both give you maps from around the world and beyond, including a lot of images that use mapping and cartography to make a point (like this stylized map of America that tells you how “Driving Is Why You’re Fat”).

Or, if you’re really stuck, you can go over to the Fantasy Map Maker site and follow the site’s creator’s advice to Steal My Maps. Though really, you should try and make your own — it’s a lot of fun, and it’ll push you, creatively. It doesn’t have to be pretty — just make it work for your story or novel.

Finally, if you haven’t been reading John R. Fultz’s blogs about writing fantasy right here on the Black Gate site, you’ve been missing out! His entry on setting and sensory details from yesterday is a great place to start, and it fits in perfectly with today’s discussion about all things maps.

Oh, and speaking of maps (he says so ever-so-nonchalantly), on September 1st, artist Niki Smith and I will launch a brand-new digital comic all about cartography, along with magic, dying worlds, and airships, entitled In Maps & Legends. Follow the link, and I promise we won’t let you get lost!

Michael Jasper has published over four dozen short stories in Asimov’s, Strange Horizons, Polyphony, Writers of the Future, Interzone, and other fine venues, including Black Gate. His most recent novel is A Gathering of Doorways (Prime Books, 2009). He also writes the digital comic In Maps & Legends with artist Niki Smith, which begins its run September 1, 2010.

Interesting stuff. I wonder if maps in fantasy novels really did start with Tolkien; certainly there were all sorts of maps for The Pilgrim’s Progress, and my copy of The Divine Comedy has a ton of maps and diagrams stuck in it. But then, those weren’t created by the writer.

On the other hand, a quick web search turns up this: “The first known map of Oz was a glass slide used in Baum’s Fairylogue and Radio-Play traveling show, showing the blue land of the Munchkins in the east and the yellow land of the Winkies in the west.” So Baum’s map of Oz could be first, then.

— Wait a minute [more searches]. Okay, another contender: William Morris had a map prepared for his book The Sundering Flood in 1897. Oz was 1900, but then Morris didn’t draw his map himself (which is odd, since he was an accomplished artist).

Anyway, ‘who did it first’ is a bit beside the point. Certainly maps have become common in fantasy. Besides the points you’ve mentioned, I think there’s also the fact that maps are, at a basic level, sometimes very helpful in actually following a story. If, as a reader, you’ve got a lot of unusual names coming at you, and no associations to go with the names, it’s easy to have them all fade into a blur, I think. So maps, family trees, and lists of dramatis personae all have that basic practical application of making the story flow smoother.

On the other hand of the other hand … I wonder if they don’t also have the function of extending the fantasy world. A map (or family tree, or list of characters) extends the world beyond the text. The story becomes a multimedia construct, in a way. You can see it. You have something sensory, something beyond just the story.

Just a few thoughts. I’m fascinated by maps, so I have to say: nice post.

— Sorry, just wanted to apologise for talking to myself a bit in the previous post. The “beside the point” comment was directed at me, not you. In my head, it made sense, you see.

Looking forward to the comic.

Great points, Matthew — I like the comparison to multimedia, something beyond the text.