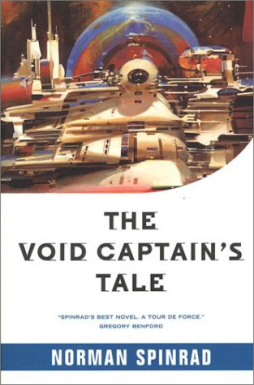 Science Fiction author Norman Spinrad, author of Bug Jack Barron, The Void Captain’s Tale, and the classic Star Trek episode that introduced the world to cigar-shaped starships of death, “The Doomsday Machine,” talks about the cruel math of “order to net:”

Here’s how it works. Barnes and Noble and Borders, the major bookstore chains, control the lion’s share of retail book sales… Let’s say that some chain has ordered 10,000 copies of a novel, sold 8000 copies, and returned 2000, a really excellent sell-through of 80%. So they order to net on the author’s next novel, meaning 8000 copies. And let’s even say they still have an 80% sell-through of 6400 books, so they order 6400 copies of the next book, and sell 5120…. You see where this mathematical regression is going, don’t you? Sooner or later right down the willy-hole to an unpublishablity that has nothing at all to do with the literary quality of a writer’s work, or the loyalty of a reasonable body of would-be readers, or even the passionate support of an editor below the very top of the corporate pyramid. Voila, the Death Spiral. And I too am in it.

Read the complete article at his blog, Norman Spinrad At Large.

He’s showing it for what it is!

Frankly, publishing, music, movies are in the hands of too few people. They’ve forced this “PC” on us for decades, for example, and really hurt “Sword and Sorcery” as an easy target.

I could go on all day about that, getting super tinfoil conspiracy theory, but frankly it comes down to that people should just stop supporting these large companies that only feed off the bones of others and directly support “Independent” acts directly. Why should a person who produces any work be it art, writing, music worry more that a publisher will like it than a fan?

I was a buyer for Borders for eight years.
That is not how books are ordered. Mr. Spinrad seems to presume anyone buying books for a chain is innumerate and averse to making money.
Fewer books may indeed be being bought, but the reasons for this are both less facile and less capable of providing us with an agreeable villain upon whom we can hang the blame for the current state of books, bookstores, and reading in general.

This isn’t the first author I’ve seen complaining about the impact of Borders/B&N and Bookscan, however. For example, I frequently hear that the sales of your last two novels dictate the orders for your third… and if you’re a midlist author whose last two happened to be small press or otherwise limited-run, Gawd help you.

Not sure how much truth there is in that, but I vouch for the fact that it’s a cautionary tale told over and over in convention bars.

Any deeper insight you can provide would be much appreciated.

I have one question about Norman’s theory of the 80% sell-through. If the first novel sold 8,000 out of the 10,000 print run, and the next print run was only a “net” print run of 8,000, then why didn’t the entire print run of 8,000 sell out? If the first book sold 8,000 then why not the second one? You can’t blame that all on the chain stores’ method of ordering books like Norman’s straw man reasoning would have us believe.

I offer this as merely something to consider.

Of the 8,000 readers who bought the first book, maybe only 6,ooo of them liked it enough to buy the second book. That’s still 80% and pretty good. But why should the bookstore keep ordering the initial print run of 10,000 when the sales figures keep declining? If another 80% liked the second book enough to buy the third, then why should the bookstore order more than they’ve sold? A book will eventually find the correct number of its audience, and bookstores are in business to make money, and money is determined by sales.

From a business standpoint this is a logical decision on the part of the bookstore.

Norman’s calculation doesn’t involve print runs; it refers only to total orders to the chains.

Since fewer copies of the second title were orderd, then the number sold drops too.

I can’t really comment on how well this one of Spinrad’s assumptions holds up for novels (i.e. that two equally popular titles will have the same sell-through), but based on my own experiences as a magazine publisher, this argument holds water. You never get 100% sell-through, no matter how popular your title is — chiefly due to spoilage, theft, mis-filing of books, etc.

> But why should the bookstore keep ordering the initial
> print run of 10,000 when the sales figures keep declining?

I think Norman’s point is that for most writers the numbers will ALWAYS decline. To sell the same number of copies for the second book, they need to ORDER as many copies as they did of the first. Because the same percentage will be lost to misfiling, returns, theft, etc.

I used “print run” incorrectly when I meant what the bookstores order. Thanks for the correction, John.

Where’s my confusion here? Seriously, what am I missing?

If a hot bestselling book sells out of its initial print run of say, 100,000 copies (because of several orders from bookstores who may only have ordered 50,000 initially), then the publisher prints more. Wouldn’t the same apply to a book on the smaller scale we’re talking about here? If the bookstores only order 8,000 books and the publisher printed 10,000, and IF the book sold the initial 8,000 then the bookstores would simply order as many as they thought they needed beyond the 8,000. When the publisher sold all 10,000 of the first print run they could just print more.

So–if the bookstores only ordered 80% of what they ordered for a second book (based on the first book’s sales) then they could just order more from the publisher IF the book sold all of that second book’s order. But the books keeps selling only 80% of a dwindling number, as postulated. So again I’m confused as to why the bookstore is being given all the blame. Regardless of the suggested thefts, misfilings, spoiled copies, etc., if the book sells every copy the bookstore has (regardless of the number ordered), then can’t they just order more of any particular book?

Dave, the bookstores CAN order more, but they seldom do because of the “first six months” mindset. So on average, a book’s potential is strictly limited by the initial print run and chain orders. My first novel, The War in Heaven, had a print run that was larger than normal and an excellent sell-through rate of over 90 percent… but the bookstores never ordered any more from Pocket Books despite selling out their stock. Two years later, my second novel in the series was given a print run that was less than one-quarter that of its predecessor even though it was, by everyone’s opinion, a better book. It also had a decent sell-through rate, but the publisher didn’t bother to release the third one, they just paid me for it and sat on it until the rights reverted.

So, despite selling more than thirty thousand copies of a debut novel, my conventional career as a SF/F novelist never had a chance, mostly because of the very structural matters to which Mr. Spinrad alluded. That’s fine for me, it was and is nothing more than an enjoyable hobby for me. But it would be a disaster for someone hoping to make a full-time career of it. Unless you genuinely believe you can do better than I did and sell a lot more than 30,000 copies of your first novel, you’re probably not going to be able to even begin making a career of it.

[…] of gamers who played through Warcraft and Warcraft II knew well.  Anyhow, it seems to me that as the market for professional storytelling dries up in the conventional book publishing arena, there should be increasing opportunities for the […]