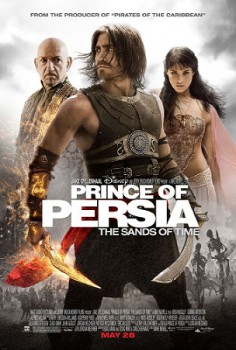 I appear to be transforming into Black Gate’s “movie reviewer.” A natural development, considering that I’m a voracious film-goer who sees most new movies during their opening weekends (a benefit of living a block away from one of best multiplexes in Los Angeles), and that the studios have tossed quite a few fantasy spectacles our way so far this year that appeal to the magazine’s demographic.

I am indeed thankful that the Great Movie Gods are providing us with more epic fantasy. I just wish they were providing us better epic fantasy. What do I need to sacrifice to get something more worthwhile from Middle Eastern fantasy than Prince of Persia: The Sands of Time? Goats just aren’t doing it, apparently, and my apartment manager has informed me that this is in violation of health codes. So I’m stuck, for the moment, with a sand-and-sorcery epic based on a video game franchise.

I had some slight hopes for Prince of Persia, despite the usual and wise caution viewers have about any movie adapted from a console video game. My hope was in the form of English director Mike Newell, who has helmed some witty comedies like Four Weddings and a Funeral, scored critically with the excellent gangster drama Donnie Brasco, directed one of the best of the Harry Potter movies, Harry Potter and the Goblet of Fire, and most crucially directed one of the finest forgotten films of the 1990s, Into the West, a contemporary fantasy that I keep waiting to turn into a cult classic.

However, whatever magic Mike Newell has in his director’s bag of tricks, he didn’t pull out any of it for this movie. Prince of Persia: The Sands of Time is not an extraordinarily awful film. It’s not even bad. It’s simply mediocre, and for a Memorial Day release it’s shamefully slight, like a spring movie designed to bolster up the action crowd until summer, but which got hastily moved into a prime slot when the studio noticed that it didn’t have a Memorial Day anchor. A lot of dinars went into the movie, but what came out is standard blockbuster fare that passes the time and then vanishes as if the sands of Arabia had covered it up.

The Prince of Persia is based on a series of video games that started in 1989 with the eponymous title for the Apple ][. Creator Jordan Mechner (who has story credit on the movie) had already made an impression with his 1984 fighting game Karateka, and the fluid movements of the platform-jumper made Prince of Persia a smash. I’ve never played the original game, since it fell in a video gaming gap in my life, between the early console era and my college days with DOOM. However, I can definitely detect a “gamist” element in the movie, some of which apparently comes from the more recent installments in the series.

For example, the story hinges around a magical dagger with a joystick button on it that when pressed causes the user to shift back in time a minute so he can correct any errors he might have made. Each use of the power drains some of the sand in the dagger, unless the player—ah, I mean the character—can find more.

When I first saw the dagger’s magic displayed, I thought I was really in for it. As a video game power, reversing time is a nifty device. But on screen I don’t want a film reversing itself with bullet-time effects every moment there’s a problem so I have watch the scene over again. Thankfully, the movie breaks out the device sparingly. It even uses it for a good moment of character drama in the build to the finale. This moment gets ruined a minute later, however, when an occurrence makes the use of the dagger totally pointless.

The biggest misfortune of the power of the “Sands of Time” is that it allows for a complete cheat of an ending that makes you wonder why you sat through all that fighting and shouting and jumping in the first place. I thought the filmmakers might try something like this stunt, but they didn’t have to. And they shouldn’t have.

Much of the negative press on Prince of Persia is aimed at Jake Gyllenhaal as the title character, Dastan, an orphan whom King Sharaman of the Achaemenid Persian Empire (Ronald Pickup) adopts as one of his sons after he sees the boy’s act of selfless loyalty. When the grown Dastan is framed for his father’s murder, he joins forces with Princess Tamina (Gemma Arterton) from the conquered city of Alamut to stop his conspiring evil uncle Nizam (Ben Kingsley) from using the Sands of Time to undo a key event in the time-stream. (Somebody’s been watching Star Trek and The Terminator.)

Dastan is a typical likable rascal character, an acrobat and sword-fighter, and Gyllenhaal is honestly fine in the part. He looks more like a member of a Grand Funk Railroad cover band than a Persian, but he’s trying to put fun into the part. His English accent isn’t all that terrible either; it only loses out because his three main co-stars have genuine English accents. 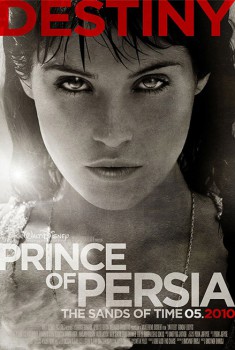 Where Gyllenhaal’s performance does waver, and in turns does damage to the whole picture, is his chemistry with Gemma Arterton. It’s one-sided, poorly played on Gyllenhaal’s side, with Arterton genuinely burning up the screen with her sultry strength. This is the second fantasy film she’s appeared in this year—she played the new character of Io in the re-make of Clash of the Titans—and she’s perfect for the genre. It’s unfortunate that Gyllenhaal doesn’t connect with her in any meaningful way except stuttering and staring at her like a thirteen-year-old ogling a supermodel in a catalog.

An important aside: While watching this movie, I realized that Gemma Arterton is perfect for C. L. Moore’s character of Jirel of Joiry. We’ve already seen what Arterton looks like with red hair from Quantum of Solace. This woman would shake the world as Jirel. Please, somebody try to get a Jirel movie made with Arterton in the lead. I know you’ll mess it up; it’s tough material. But you’ve got the perfect actress before you . . . seize the moment!

Ben Kingsley’s name is in the credits. This means he gets a paycheck. Kingsley has also been in Bloodrayne and A Sound of Thunder. He got paychecks for those as well. Sexy Beast just doesn’t pay the bills.

It’s always nice to see Alfred Molina. I don’t think I’ve ever regretted seeing this man appear in a film; he always brings an unexpected spark with him, and as a scoundrel ostrich-racing impresario (he fashions a ridiculously deadly reputation for his town to keep away tax collectors from his operation) he’s probably the most fun the movie has to offer. He delivers the only zinger line in the script, involving the Princess Tamina’s worth in camels. I doubt another actor could have made the line as funny.

Prince of Persia stays busy with action, but the scenes blur into each other in a dull pattern of leap-dangle from edge-dodge arrows-repeat. When the steel comes out for close-quarters, the situation hardly improves. The tightly-shot and quick-cut style of the sword fights is more wearisome than exciting. The only set-piece standout is a confrontation between two expert weapon-throwers. This scene creates a sense of physical geography and tension that most of the others lack.

However, what hurts Prince of Persia more than any other of its mediocre elements is its lethally dull exposition about magical plot devices and backstory. Most fantasy movies try to get these explanations out of the way as early as possible, but writers Boaz Yakin, Doug Miro, and Carlo Bernard only start to stuff in the backstory at the halfway point and it seems to never let up after this. Worse, Mike Newell appears completely bored with these scenes and executes them with minimum interest. The actors might as well be reading off TelePrompTers over each others’ shoulders. 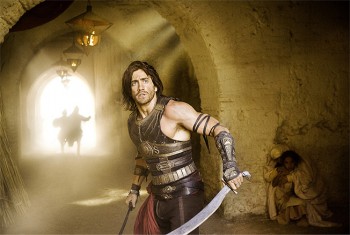 The script explores something unexpected and weird among the standard fantasy action: a contemporary political slant. The Persian Kingdom’s attack on Alamut is excused as a pre-emptive strike because the Holy City supposedly possesses dangerous weapons, the kind that we might say would cause mass destruction, which the Alamutians may sell to the Persians’ enemies. However, this is a ruse and a cover to obtain another powerful item, but even after the attack shows there are no weapons in Alamut, the King tells the princes to continue to search for them.

Yes, the movie goes there. I have no idea why the filmmakers wanted to cram an Iraq War allegory into their light fantasy adventure. Perhaps they simply found it an inspiring angle and meant no actual statement; I sincerely hope so. It’s still distracting. I’m fine with Green Zone and In the Loop—both great movies—delivering this sort of message. But I don’t want it in my ancient world sword-and-sorcery flick, thanks. It does give me something to write about, however.

At the very least, Prince of Persia looks and sounds phenomenal. There are moments when the combination of Harry Gregson-Williams’s sweeping Middle Eastern music, John Seale’s camera work, and the beautiful designs and costumes create a romantic “Arabian Knights” high. The money is on the screen. It’s just not in the script.

Prince of Persia: The Sands of Time opened on Memorial Day weekend in third place (behind Shrek Forever After and another Middle Eastern-set outrageous fantasy, Sex and the City 2) with a $30 million gross. The film cost around $200 million. That’s bad news. I hope it’s bad news only for video game adaptations, and not my beloved sand-and-sorcery genre.

Gemma Arterton for Jirel of Joiry! Spread the word!

Well, that provoked a bout of choking-on-my-coffee.
Nice to start the day with a smart film review containing some humor, but I really didn’t feel like changing my shirt before the work day even got started.

Sorry about ruining your shirt, Chris!