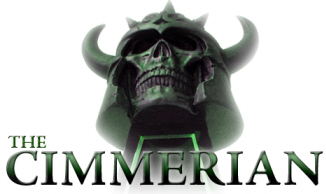 The Cimmerian began as a bi-monthly print journal in April 2004. Edited by Leo Grin and dedicated to the work of Robert E. Howard, it ran for thirty-five issues and was twice nominated for the World Fantasy Award.

The Cimmerian website launched the following year, featuring contributions from Steve Tompkins, Rob Roehm, and Mark Finn, and it attracted considerable attention. When the print version came to an end in December 2008, Grin handed the reins to Tompkins, who managed the site until his tragic death a few months later.

Since December 2008 the website has broadened focus, becoming “a website and shieldwall for Robert E. Howard, J.R.R. Tolkien and the Best in Heroic Fantasy, Horror and Historical Adventure.” Under the guidance of new manager Deuce Richardson, over the past year it’s also turned its keen critical eye to Sax Rohmer, David Gemmell, Karl Edward Wagner, Charles R. Saunders, Michael Moorcock, Clark Ashton Smith, H. P. Lovecraft, and many others. With the greater scope has come greater readership, growing to nearly 100,000 viewers/month.

The articles at The Cimmerian, by such folks as Miguel Martins, Al Harron, Barbara Barrett, William Maynard, Jeffrey Shanks, Keith Taylor, Brian Murphy, and Jim Cornelius, have never been less than fascinating, covering everything from the latest on the new Conan movie to Weird Tales to the recent — and excellent — tributes to Frank Frazetta.

Leo Grin says the blog will continue until June 11, the anniversary of Robert E. Howard’s death, and after that the site will be archived.  Its loss will be keenly felt.

This is rotten news. The scholarship, passion, and variety over at The Cimmerian was beyond compare. It will be missed.

Well said, Bill. I admit I don’t quite understand the reasons given for the shut down, either. I understand that Leo is a perfectionist, and perhaps he feels that if he can’t watch over things as closely as he once did, then the site should close. But by all indications its audience is at an all-time peak, and the articles continue to be timely and fascinating. I just don’t get it.

Thank you for the kind words. It was an honor to be associated with THE CIMMERIAN. It will certainly be missed. Happily, there are still sites like this to help fill the void.

Thanks William! You will always be welcome here, whenever the muse to write strikes you.

Drop me a line at john at blackgate.com when you have a moment.