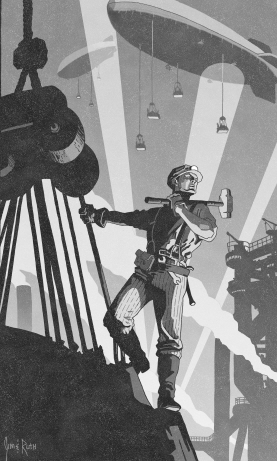 It looked like a routine hire… until Kellen found himself framed for theft, and embroiled in a plot to steal the secret of the Crown’s great airships.

The ship’s motion grew more violent, and the crewmen passing his hiding place cursed. Kellen smacked into the hull, then fell back against a sharp-cornered skip. How much more of this could the ship take and stay aloft?
Against all expectation, he’d escaped discovery. But he had to do something. They’d toss him overboard as soon as they found out, he had no doubt, along with his hopes of escape, but he wouldn’t be the cause of destroying this ship and its crew.
He wriggled out from his hiding place, hands held high to look nothing like a threat. “I need to speak to your captain.”
Silvery beams swung toward him, and he shielded his eyes. “Stowaway!” one shouted.

Renee Stern’s short fiction has appeared in Aeon Speculative Fiction, Beneath Ceaseless Skies, Oceans of the Mind, and the anthology Sails and Sorcery: Tales of Nautical Fantasy.  She lives outside Seattle.