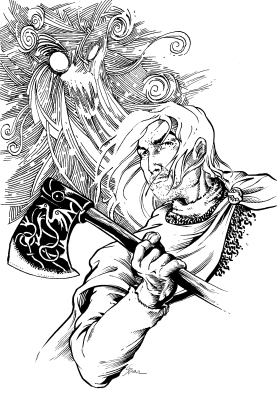 SG: What’s on your launch pad right now? What’s in your future?

John C. Hocking: The third Brand tale, by far the longest and most ambitious, is in Black Gate 14, which just came out. Five years back, when Howard Andrew Jones was editing the Flashing Swords e-zine, I wrote a trio of stories for him about a different set of characters. I’ve written two more tales of the Archivist and his friend Lucella, and Black Gate has accepted them. I’ve been stalled on both a novel about the Archivist and the final Brand story, “Home to Midgard,” but I hope to get both into action before too much longer.

You can read the complete interview here. And you can read an excerpt from the third Brand tale, “The Bonestealer’s Mirror,” now appearing in Black Gate 14

Look for John C. Hocking’s tales of the Archivist and his friend Lucella in future issues, starting with Black Gate 15.