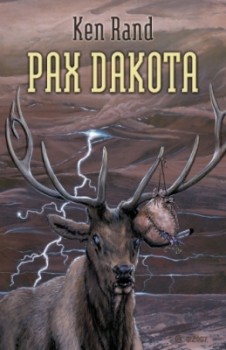 In 1899 the United States shares an uneasy peace with its western neighbor, the Dakota, a confederated nation of Native American peoples that had joined forces to defeat the US in a war almost three decades earlier. The Pax Dakota, the peace that governs these two competing powers, is ever in danger of breaking as racism, ambition, and old animosities on both sides threaten to plunge the US and Dakota nations back into a bloody war. Into this mix steps the Old Enemy, a malignant spirit that seeks enough souls to power its return trip back to heaven — back to the side of Wakan Tanka, the Great Spirit that had exiled the Old Enemy to the Earth in the time of the First People.

In Pax Dakota Ken Rand gives us an immediately compelling alternate historical setting seasoned with a Native American flavor that gives it an exotic, unexpected quality. But primarily this is an action story, a Weird Western with horrific elements that quickly ratchets up the action and never lets up until the final scene.

The book opens with the death of Iron Shield in 1883, great war leader of the Dakota and architect of their new nation. Upon his death an entity known as the Watcher is released to find a new host — the benevolent Watcher is a guardian spirit of humanity, a being that imprinted Iron Shield with the idea for the Pax Dakota while still just a boy. The Watcher’s plan had always been to contain the prison housing the Old Enemy within Dakota territory so that the Dakota could maintain a vigil there. However, the prison of the Old Enemy, a region know as Devil’s Clay, remains in US territory after the peace, and the Watcher must quickly launch a plan that will bring about the final confrontation with the Old Enemy.

____________
Thus the stage is set for the events of 1899, when the Old Enemy escapes from his medicine bundle prison beneath the Devil’s Clay and sets about trying to engineer a war between the Dakota and the United States — a war that will spread over the entire globe, and provide him with all the souls he needs. Against him are two teenagers; Etta Mae Dooley, a pregnant one-time employee of a bawdyhouse whose botched attempted rescue of her beau results in his death and the murder of the town sheriff by her hand, and Joseph Thorn, a mixed-race Dakota with a decidedly agnostic bent that finds himself in hot water when he steals some horses from a ranch on the US side of the border. Their meeting seems like happenstance, but the two form a fast bond that hints at destiny. Together they discover the nature of the evil they face and rush to Wyoming Wells, the border town around which the events of the book swirl, to warn the authorities.

But the Old Enemy is the authorities, having already taken over most of the town. And here is one of the most novel aspects of Pax Dakota; the Old Enemy, a disembodied spirit, possesses and animates the dead. Rand handles the Old Enemy point-of-view very well and, from the entity’s humble start possessing the carcass of a dead fly in a spider web to his final manifestation as the puppet-master of hundreds of animal and human corpses ranged over a wide area acting in concert with one another, this character undoubtedly comes across as the most interesting in the book. While occasionally a bit disorienting — the simultaneity of the Old Enemy’s awareness often means he is experiencing events through a different pair of eyes from paragraph to paragraph — the technique works marvelously and serves to further propel the plot forward along its breakneck pace.

Pax Dakota really is more of a thrill ride than an alternate history, Joseph and Etta speed from scene to scene in a completely organic and compelling way but, nevertheless, don’t have a lot of time for anything else. Still, they are interesting characters, mostly because Rand shrewdly plays against type by making his Indian Brave and Prairie Prostitute completely at-odds with their stereotypes. In the end both are integral to the outcome of the book, and the denouement in which they explore the mythic resonance of their own story is a particularly satisfying capstone to a tale that strays far afield into the fantastic.

However, despite the name of the book, surprising very little is said about the Pax Dakota and the Dakota nation itself. Indeed, all of the events of the book take place on US soil. While the sense of place is nicely evoked — especially the landscape of this area in which Rand himself lived for many years — the hints about the Dakota nation are left maddeningly unfulfilled. Brief mention of interesting facts such as the racially mixed nature of the Dakota nation, which doesn’t just include other Native American tribes but also groups such as Irish-Dakota and Chinese-Dakota, tantalizing remarks about Dakota technology and their harboring of the renegade ‘Edison,’ and sketchy notions of the extent of Dakota territory, serve to pique the interest in something that is never explored. Perhaps this is a case of a good writer leaving his reader wanting more, but I couldn’t help but feel that the alternate history premise of the book was not followed-through, and that the story itself did not actually need to take place in an alternate history setting at all — it is really a straight Weird Western.

But this does not diminish Pax Dakota as a fast-paced novel with some original fantastical elements written by an author with a storyteller’s knack for keeping his reader turning the pages. Sadly, Ken Rand died less than a year after the publication of Pax Dakota, so any hoped-for sequel that would have more fully explored this very promising world will forever remain out of reach.

A slightly different version of this review originally appeared in Black Gate Magazine Issue 13.
__________
BILL WARD is a genre writer, editor, and blogger wanted across the Outer Colonies for crimes against the written word. His fiction has appeared in numerous magazines and anthologies, as well as gaming supplements and websites. He is a Contributing Editor and reviewer for Black Gate Magazine, and 423rd in line for the throne of Lost Lemuria. Read more at BILL’s blog, DEEP DOWN GENRE HOUND.