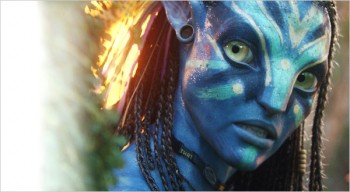 Here in Central Virginia, we’re having one of those once in a decade or so storms in which you fill up your bathtubs with water and just hope the electricity stays on. So far it has (or otherwise I wouldn’t be able to post this).

The good news is there’s nothing like a snowstorm as an excuse to catch up on your reading. The bad news is I won’t be getting out any time soon to see this. I’ve never been a James Cameron fan, and I had the as-you-might-expect reservations that the technology (as is frequently the case with sf/fantasy films) would override the storytelling. Evidently, at least according to this review and a few others I’ve read, that isn’t the case.

I guess what’s really weird is this all sounds like a very giant first step into an immersive computer generated “reality” that once upon a time not so very long ago was only in the imagination of the cyberpunks.