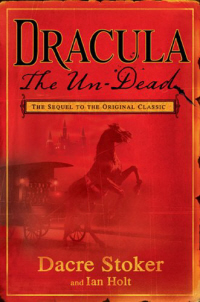 Let’s be honest.  In my house, Christmas always comes early; usually on October 31st to be exact, and everything after that is just commercial fall-out.  However, I truly got a  horror-movie-opening-night, new-season-of-True-Blood-sized surprise to find that on October 13th the literary event of the century had slipped past me.  But I’m sure it’s because I was busy installing my life-sized, automated Specter of Death in the front yard to scare the crap out of the neighbor kids.  One can only multi-task so much.

Dracula the Un-Dead is based in part on 125 pages of handwritten notes left by Bram Stoker.  Of all the books, movies and other tales to use Dracula’s name throughout the decades, this is the first since the 1931 Bela Lugosi movie to have the Stoker family’s endorsement and input.

Needless to say, I violated several traffic laws and took out a couple of skate boarders getting to my local book store. It was a bit anti-climatic to find there was no Dracula the Un-Dead display up front, but it was prominently displayed in the horror section, and like Golem with his “precious” I clutched it in one hand (and clutched the steering wheel in the other) to get back here.

And I thought the tickets I just bought to Adams Family – the Musical were going to be the pinnacle of the holiday season.  Oh please, PLEASE let it live up to the hype!

Oh my gosh! Just what the genre needs, another vampire story. Although, since it was written 110 years ago, I guess we will be spared the adolescent angst that seems to plague most vampires these days. This story might be actually worth reading. Oh, and Sue- its GOLLUM, not Golem.

Sorry about that, I’d have smudged my black nail polish looking up the spelling. No wonder that incantation for re-animating the dead isn’t working…

[…] the Un-Dead, the sequel to Bram Stoker’s Dracula and written by his great-grandnephew did not, as I feared, live up to its predecessor.  It wasn’t awful, but it was surprisingly uninspired and worked far […]