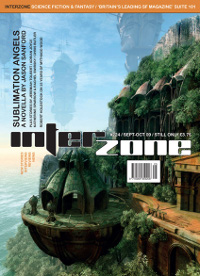 If there is a watch, then there must be a watchmaker. That’s the crux of the argument for intelligent design, that existence, and specifically you and me, are the result of some conscious creator. My main problem with this is the adjective “intelligent.” If I was designing existence, there’s a lot I’d leave out, like cancer or maggots or flatulence or Glenn Beck. Or that for certain kinds of life to continue and thrive, other life forms must suffer. Besides, this all begs the question of, if there is a designer (intelligent or otherwise), who created the designer?

Whether our universe was a random cosmic accident, the result of some higher consciousness declaring, “Let there be light,” Olaf Stapledon’s “Starmaker,” or a computer simulacrum created by another dimension of beings with a lot of bandwidth, who knows? And whatever we come up with as an explanation, most likely it is wrong.

Why? Well, the answer is in the Bible, though it’s not the answer religious fundamentalists tend to appreciate. In the Book of Job, God has plagued his good and loyal servant with one catastrophe after another. Job petitions for explanation. But Job’s friends keep telling him the explanation is obvious: Job must have offended God. Job insists he hasn’t. God gets tired of listening to all this, and appears before them and asks if any one of them ever created a deer, or the arch of the heavens. No one here except, God, right? Then stop being arrogant and thinking you have any idea of what God does or why he does it. It’s beyond your limited comprehension. You guys haven’t got the faintest clue.

Which brings me to “The Godfall’s Chemsong” by Jeremiah Tolbert, which appears in Interzone #224.  A race of underwater creatures feast upon “godfall” – the corpses of perhaps human beings that for whatever reasons are laid to rest in submersible internment. A strict social hierarchy dictates who gets to feed first on the godfall, with, of course, a set of Darwnian “survival of the fittest” behavioral rules restricting who can do what under what circumstances, those producing the larger and more frequent broods getting to sit at the top of literal food chain. The protagonist, Muskblue, is at the bottom of the totem pole, and is potentially a part of that food chain.

Muskblue had been praying to the Gods for a quick death. Life within the pod is no longer bearable. There can be no life outside the pod. But she will not give her flesh to the pod. Instead, let one of the beasts take her, she decided. Until tasting the godfall.

By breaking the taboo and surreptitiously eating of a stray body of godfall that has escaped the pod’s notice, Muskblue increases in strength, attracts a mate and produces a brood. While she remains isolated from the pod, circumstances among the gods of which she can only vaguely comprehend (i.e., a battle that will produce a wealth of godfall) provides a seeming gift.

The Gods have never spoken…Now they speak with bounty, Muskblue cannot count number of godfalls around her. It seems as if the meat will never end. What is the message? What are the gods saying?

Come to us, she thinks. Here is the strength. Rise to heaven and join us. The thought does not seem as if it is her own.

This nicely depicts how random events in another reality oblivious to ours, and of which we in turn have only the dimmest perceptions, affect ours, and how most likely we misinterpret them, if not utterly fail to comprehend them. The story provides evidence of intelligent design on the part of the author, even as he questions the notion of such design in the universe that writes (or, perhaps more accurately, allows to unfold) our own stories.