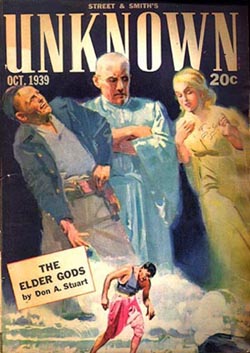 I’m guest-blogging this week at Babel Clash, along with fellow Pyr author Matt Sturges, and for the past couple days we’ve been kicking around the topic of our influences and anti-influences. It’s not always the biggest books or the best that are influences, though. For instance…

Don A. Stuart‘s “The Elder Gods” is a fantasy novella from the late 1930s that reads a lot like the science fiction being written around the same time. That’s no accident: the author behind the pseudonym is John W. Campbell, once a leading light in the “super science” stories of the 1930s, later a pioneer of a more sophisticated form of speculative fiction, and (by the time the work under review appeared) he was well into his third and longest career as the influential editor of Astounding Science Fiction–and the new fantasy magazine Unknown, in which “The Elder Gods” first appeared. (I reread it in a rather battered copy of the 1970s Ace reprint of The Moon is Hell; but there’s a NESFA edition of Campbell’s Stuart stories, including “The Elder Gods”. That’s what I’d recommend seeking out, if you’re interested, as there are some typographical glitches in the Ace edition; plus, it may be harder to find; plus, I’ve always thought “The Moon Is Hell” was a stupid title.)

In Unknown, Campbell didn’t want to create yet another knockoff of Weird Tales; the tagline for the paper-covered anthology From Unknown Worlds was “Fantasy Stories for Grown Ups”–by which he seems to have meant the serious grownups who were reading Astounding. Lots of his Astounding writers crossed over to write for Unknown, and “The Elder Gods” was apparently his how-to-do-it example, applying the Astounding method of speculative fiction to fantasy.

[ Spectacular Stories of Scientific Theology beyond the jump.]

I read “The Elder Gods” several times, on purpose, as a teenager, but I’m not sure I’d do the same these days. In those dark times, flat-out fantasy novels were relatively rare on bookstands–I seem to recall even the early “Witch World” books were marketed by Ace as “novels of super science”–a phrase that creaked audibly even in the 1960s. But now fantasy is everywhere and sf fans are complaining that the genre tail is wagging the dog.

On the other hand, adventure fantasy in shorter lengths still isn’t super-common. There’s Black Gate itself, of course, and the anthologies from Rogue Blades Entertainment, and Beneath Ceaseless Skies and the upcoming anthology Swords and Dark Magic… okay, there’s some around. My point is that there’s never really enough.

On the other other hand, we have the story itself. In it, there is a struggle between two sets of gods: the Elder Gods of the title, who are anthropomorphic deities not too different from the Greek or Norse pantheons, and the newfangled Invisible Ones. The Elder Gods are losing, because the Invisible Ones are peddling a more appealing product: absolute foreknowledge, including the time and place of one’s death. (I know; I don’t get it either.)

The two sets of gods can’t affect each other directly, but the Invisible Ones have a stranglehold over almost everyone on the islands of Azun. If the Elder Gods are to have a chance, they need someone who hasn’t been subordinated into the Invisible One’s religious system, someone whose actions they won’t be able to predict or control.

So the gods shipwreck a passing sailor and toss him up onto the beaches of Azun. His mortal arm will be the Elder Gods’ weapon against their invisible enemies.

All this is pretty good, I think, and a lot of the story that follows is good as well. The story is not written very well; descriptions are vague and tend to hinge on colors. (The priestly garments and altar of the Invisible Ones are “scarlet-orange” and that awkward phrase gets repeated a lot. And so on.) But “Stuart” can usually say what he is proposing to say without a lot of messing about, which is the main thing in a story like this.

The two main problems with the story are that Daron’s problems tend to get solved for him by direct intervention of his patron gods, and that the enemy gods, the Invisible Ones, are strangely feeble antagonists. There’s one great scene where Daron is accosted in the street by thugs who turn out to be undead, and another time when Daron’s friend is hypnotized into offering him poison wine, but those are about the only times the Invisible Ones take significant action to defend themselves. Villains should be made of sterner stuff.

Daron himself is a likeable, if somewhat smug, swashbuckler, preferring to use his brain in the service of his theoclastic war rather than his sword, although ready enough with both. I’d like him better if he were more at a loss sometimes–if he didn’t always have the right answer up his sleeve. (And, if he doesn’t, the gods supply it.) But I always liked it that he dismounted from his horse as soon as he’s surrounded by thugs. “A foot man does not fight a mounted man but first his horse,” as he explains to the horse when he catches up with him later. I’m not sure this is good tactics in a street-fight, but it shows Daron is a pretty good guy–willing to look out for his horse in a tight spot. (This scene was in my mind when I prompted Morlock to dismount when confronting some thugs on foot in chapter one of This Crooked Way.) For the rest of the characters: Nazun, the Elder God of wisdom and Talun, the Elder God of the sea both make a pretty good impression, but most of Daron’s ostensibly human acquaintances are more lightly sketched in.

The main point of the story, from JWC’s point of view, may have been the extensive justification given for the existence of the gods at all. It turns out that the story doesn’t take place in the past, or in another world, but in the distant post-apocalyptic future. The gods are a product of psychic scientists who fled the chaos attendant on the collapse of technological civilization and wanted to create guides for humankind, so that it wouldn’t destroy its new civilization as it had the previous one. Stuart’s fantasy novella is actually a work of Campbellian science fiction, similar in lots of ways to, say, Asimov’s Foundation stories.

I don’t object to this–certainly Campbell advanced more immediately pernicious notions in his career–but it doesn’t give the story any special gloss for me. The problem with idea-stories is that they often don’t make sufficient impact as stories, and the ideas (as in this case) aren’t terribly deep, stripped of their story-mask.

I wonder if Campbell’s novella may have had an influence on the young Fritz Leiber, though. His first Fafhrd and the Gray Mouser had already appeared in Unknown when “The Elder Gods” was published, but the mix of science and skepticism that make Lankhmar and its environs distinctly different from Robert E. Howard’s darker, less rational worlds might have had something to do with “Stuart”/Campbell’s work.

So, in summary, the novella has a certain interest, but it’s mostly a historical interest.