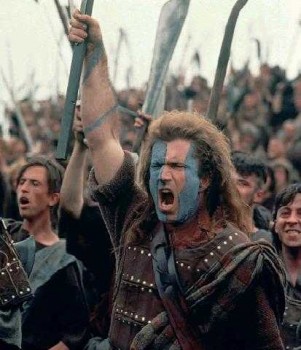 The film spares no trick in getting the celebratory atmosphere just so — for the court is alive with news that an entire treasure fleet of the hated Spaniards has been captured, the funds diverted to her majesty’s treasury, the ships scuttled or pressed into privateering service for the Crown. Elizabeth herself blushes in anticipation of receiving the hero of the hour, the man whose name is on every tongue (and has been for quite some time, truth be told), Vice Admiral Sir Francis Drake. The tension builds, the courtiers grow restless, the lavish entertainments are ignored. All necks stretch, even the alabaster column of the monarch’s herself, when the herald announces the great man’s arrival and the doors swing open.

There are people who will argue that historical accuracy doesn’t matter in a film. Those same people would spit and scream if they saw the above because, let’s face it, it’s just so darned obvious. Obvious to us, that is, who live in a world where casual Friday has expanded to include every day but those of weddings, funerals, and Mad Men parties. But laughers like this abound in historical dramas if you know even a smidgen of history, and the 400 years separating our t-shirt culture and Elizabeth’s hose and lace is by no means so vast a gulf in the world of Hollywood costume designers that would place a Renaissance morion on the head of a viking of the Dark Ages, or clad an Imperial Roman in 14th century plate — the only difference is the average person does not know or care about these things, whereas a t-shirt and baseball cap would hit them like a slap in the face. 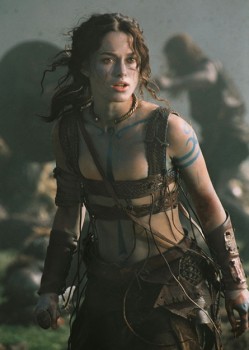 What these people are really saying, then, isn’t that historical accuracy doesn’t matter on film — because clearly they wouldn’t be happy with a gang-sign flashing Drake with ball cap and iPod earbuds — only that they don’t care to learn any history.

This goes beyond costuming, of course, and The Times Online has just posted a nice list of the 10 Most Historically Inaccurate Movies. There are some whoppers on there, and a quite a few films notable for their absence (2004’s King Arthur!), but it’s a pretty good list that shows just what is wrong with some movies. It also illustrates the different ways a movie can screw up in presenting a historical period — as well as the kinds of pedantry that can attach to criticism of a film for doing just that.

So let me just say that, despite being an elitist snob when it comes to morions on vikings, I’m pretty easy-going when it comes to a lot of the things that get screamed about when it comes to historical accuracy, and I tend to be bothered more by inaccuracies of appearance than of historical fact. On the surface, that seems like getting things backward — surely the truth of history outweighs mere outward appearance?

In some cases, yes it definitely does. A few films on that Times list really highlight this. 2000’s U-571 with it’s swapping of the historical British sub crew for an American one is a shameless besmirchment on the men who actually carried out the mission and is a clear case where ignoring a central fact of history almost completely undermines an otherwise decent film. The depiction of the British (again, sorry fellas) in Mel Gibson’s Braveheart rehash The Patriot has them behaving essentially like Nazis. But does it matter that the Emperor Commodus was really strangled by his wrestling partner, rather than knifed by Russell Crowe? Or that Antonio Salieri really didn’t harbor murderous thoughts for his young Austrian rival?

I think quite obviously there has to be a different approach to contemporary history versus more distant periods. It absolutely matters to get things right when we are talking about events but a few generations removed from our own times, events that still resonate with us. Also, many of contemporary historical films purport to be based on a true story (U-571) — and in this case getting it right should be of the utmost importance. 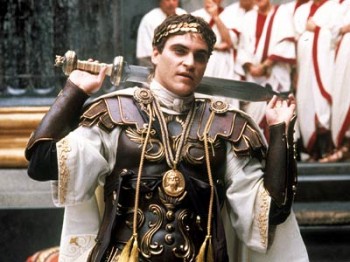 The flipside of that is Hollywood’s treatment of the distant past, which has always been more on the level of historical fantasy than of documentary realism. Gladiator is a perfect example of that. It does not claim to be based on a real story, and it abounds with visual clues that tell you quite clearly it’s more about being in its own world than in the historical past. I think it quite cleverly plays with historical figures to lend some weight to events — a philosophical Marcus Aurelius wanting a moral man to steer Rome back to Republicanism, as well as a wacko Commodus’ obsession with the arena — which he really did fight in historically. Yet there are people that will get quite livid about Gladiator, and so to its precursor The Fall of the Roman Empire — and Spartacus, Cleopatra, and Ben-Hur for that matter.

Braveheart is an interesting conundrum, since it abounds in both errors of appearance and of fact. So too does the story resonate to this day; though not exactly contemporary history, Scottish resistance to English domination is an important part of the character of the Scots. So, is it important that William Wallace was a landed noble and minor knight, and not a poor crofter? That the French Queen he supposedly romanced was only eight — and in France — at the time? That a figure possibly even more significant in the Scottish rebellion, Andrew de Moray, isn’t even in the film? Or that pictish woad (1,000 years in the past) and kilts (couple centuries in the future) don’t belong on 13th century Scots?

Well, that depends, doesn’t it? Depends if you’re an expert or layman. A Scot, Englishman, or some other group without a horse in that particular race. The matter of a distant past again comes to the fore in this respect, because, even though this story still has direct emotional significance to people alive today (in a way that, say, a film about Rome cannot) and it is based on a true story, it is also the telling of a legend. That I think is the key to how one must approach these sort of films — a movie taking place in the 1940’s is immediate history, not legend, one portraying famous events in the 1290’s is a different animal. If you try to dig at the truth of Wallace’s life — or that of any significant historical figure of more than a few hundred years ago, you run up against rumors, folktales, wishful thinking, and legend. That time already belongs half to our world, and half to that other, different place that is the human imagination. 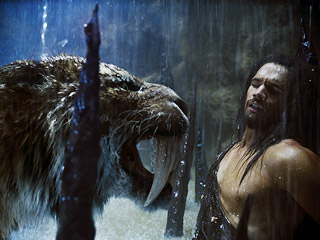 Is calling Amadeus inaccurate a criticism, or compliment? Personally, I think it’s a brilliant play and excellent movie that evokes history while subverting it. Are the absurdities of 10,000 BC even deserving of criticism, when clearly they don’t take themselves seriously enough for anyone else to think to do so? And what about the goofy costuming in The 13th Warrior — should people really cringe at morions on vikings?

Just what side am I on, in this whole debate?

I don’t think there is a side. Anyone who consistently maintains one or the other has stopped thinking about the issue. Claiming entertainment is more important and history doesn’t matter completely misses the point of historical films — it’s the history that’s entertaining! And those who think that films (and, by extension books, plays, TV) must always adhere as closely to the facts as possible are so completely unimaginative that they’d decry as a fault what is in many cases a virtue. Films must be taken on a case by case basis, and the anti-intellectual attitude ‘it doesn’t matter’ should never be used as a defense for laziness (morions) or disrespect (u-571), but nor should rigid adherence to the textbook blind someone from appreciating films that take history and legend as a launching point for telling an excellent story (Amadeus, Gladiator, Braveheart). As with any art, it’s the work that needs to be considered on its own terms.
__________
BILL WARD is a genre writer, editor, and blogger wanted across the Outer Colonies for crimes against the written word. His fiction has appeared in numerous magazines and anthologies, as well as gaming supplements and websites. He is a Contributing Editor and reviewer for Black Gate Magazine, and 423rd in line for the throne of Lost Lemuria. Read more at BILL’s blog, DEEP DOWN GENRE HOUND.

[…] a rather long post all about what belongs on a viking’s head over at BG today entitled ‘Getting It Right — and Wrong — on Film.’ Actually, I did manage to range a bit beyond the headware topic to include garments of […]

I don’t mind some anomalies, but the further out of time an anachronistic piece, the more noticeable and bothersome.

But, it’s not just Hollywood. This year I’ve seen two blatant mistakes on History Channel programs. ( 1.) American Civil War soldiers at Gettysburg all armed with flintlocks 2.) Scandinavia map including Finland and not including Denmark)

The History Channel is a whole ‘nother subject . . . the programs they show (which aren’t always in the strictest sense ‘theirs’) range from the excellent and well-researched, to the comically bad.

Plus, when it comes to a lot of these hastily assembled docs, you have to consider some of the ‘inaccuracy’ comes from the montage of stock footage underlying exposition that it doesn’t reinforce — so it’s often less about being inaccurate then it is about being lazy.

But yea, I’ve seen a lot of dumb mistakes on there, and I certainly don’t think the issue has any of the nuances of historical films — historical documentaries purport to be about history, and therefore have a duty to be as accurate as possible.

Very nice, thoughtful piece. Many films set in the past are obviously crafting a myth (or making use of a precrafted one), and different standards of accuracy apply. Though I think one can critique the myth as a myth. (The myth that the USA defeated the Axis powers with minimal help certainly needs to be stomped on until it stops moving.)

The Times article itself has some inaccuracies, which shows how tricky this process can be. My favorite bit was the “U-571” screenwriter saying (if he was quoted accurately), “Both my grandparents were officers in World War II…” Either his biology is weaker than his history, or there’s a shocking revelation buried in there…

Well, he meant both his grandfathers, surely?

And critiquing a myth as myth is definitely in the cards — notice I barely mentioned King Arthur(2004), I’ll save a look at that one until someone wants to pay me by the word for it.

Is the reason The Knight’s Tale didn’t make this list (knights in shining armor battle to a sound track of classic rock, while Geoffrey Chaucer shills as a joust announcer) is that it isn’t attempting to be historically accurate, just fun?

Speaking of art, or, let’s not be so high-faulitin’, mere entertainment, anybody ever hear of this Shakespeare fellow and his so-called histories?

Good point, old Will wasn’t above some artistic license to suit his Shake-scene.

Links and Things « Enter the Octopus

[…] Getting it right – and wrong – on film (fantasy and historical movies, headgear, costumi… […]

I’ll admit that I’ve enjoyed a few of those movies in the 10 worst list, Braveheart and Gladiator in particular, without knowing beforehand the histories of the specific characters.

I certainly didn’t realize that the Battle of Sterling Bridge was actually on a bridge, at least not from the grassy fields trampled by Scots in Gibson’s movie.

BTW, I thought the morion in the 13th Warrior looked rather dashing with the breastplate. In fact, the Norsemen were reminiscent of SCA warriors hanging out after a war. Quite touching. 😉