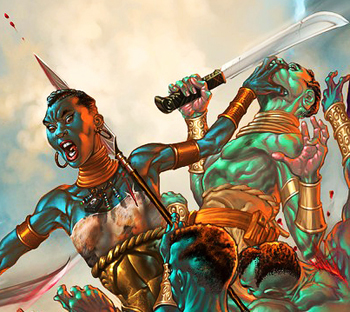 The man is back!

Charles R. Saunders rocked Sword-and-Sorcery in the Ã¢â‚¬â„¢70s and Ã¢â‚¬â„¢80s with his African fantasy hero Imaro, a compelling character who tore through the pages of numerous magazines and whose exploits were ultimately collected in three volumes from DAW. Over the last few years two of those were generously updated and republished by Nightshade Books, causing fans of Saunders’ unforgettable heroes to rejoice at the return of one of the masters of the field.

Now, via Brother Uraeus’ newly created Sword & Soul Media imprint, Saunders brings us the tales of Dossouye, a warrior woman from an alternate Africa that — while not the same as Imaro’s Nyumbani — nevertheless brims with all of the jeweled kingdoms, scheming sorcerers, doomed quests, and death-defying heroes ravenous fantasy fans have come to expect. It’s epic storytelling immersed in a feat of enchanting world-building that at its best rivals Tolkien, and this week at Black Gate reviewer Bill Ward brings you all of the exciting details.