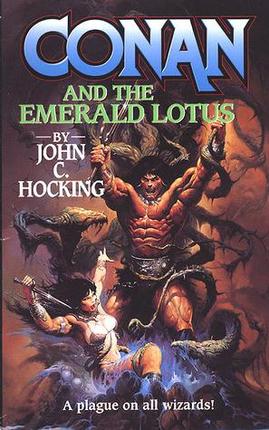 First up on my summer reading is Black Gate submissions. That’s first up on my reading list all the time, any more. I’ve been sending out responses and have about forty more to read in THIS batch before I move on to the last 75 submissions. I also need to finish up my contributions to the gaming and review sections of issue 11. John’s got the issue all lined up, with just a few holes to plug in, article and review wise, from the stockpile I’ve accumulated from our talented contributors. You can see a preview of issue 11’s cover at the Black Gate web site.

I’ve taken a little time for reading for fun; more than I’ve been able to take for three or four years, really, as there wasn’t much time for fun reading while working on the master’s degree. I tore through a book Eric Knight sent me, Fatherland. I sure wish I could figure out how Harris made all that description and world building so interesting, but I’m still scratching my head. Maybe it was in the creation of the alternate world as a character, but that’s too simple an answer.

Me reading an entire novel, and a thick one, like Fatherland, is a rare occurrence at this point in my life. What with the recent madness of the degree and the move and remodel, before that reading subs for Flashing Swords and now for Black Gate, and having children, well, anything but short stories feels like an impossible barrier rather than something to look forward to.

Speaking of looking forward to reading, though — I had the rare honor of reading something many have desired to see but few have ever held in their hands. Shortly before their death, L. Sprague de Camp and his wife Catherine related that they had finished the manuscript together reading on the floor of de Camp’s study because they couldn’t put it down. De Camp called it one of the best Conan pastiches he’d ever read, but Catherine de Camp just came right out and said that it was THE best Conan pastiche she’d ever read. No small wonder, since its writer had drafted Conan and the Emerald Lotus, which remains near the top, if not at the very apex, of most people’s Howard pastiche list. John C. Hocking really captured the character of Conan — the complexity, the atmosphere, and the style. The de Camps liked Emerald so well they pulled it out of the slush and published it, and the second, Conan and the Living Plague so well that they were going to try to take it to hardback. Hocking thought he’d be drafting many a Conan tale in years to come.

But it was not to be. The de Camp’s were older, and the market was changing, and the Conan property changed hands. Hocking’s book got lost in the shuffle despite being championed, and later companies opted to publish Turtledove’s Conan (which was pretty much thoroughly blasted by Conan fans). No other Conan novels have followed, despite continued interest from Conan fans in this “lost” Conan novel. They know Hocking wrote Plague, and still bring it up from time to time on forums even today, almost a decade later. Hocking himself shrugs his shoulders about it and doesn’t seem to bear anyone ill will for what happened, but then he’s a gentlemanly fellow.

It was glorious. Anyone who loves an out-and-out sword-and-sorcery romp would thrill to this ride. Hocking pretty much nailed Conan, who’s far more complex a character than most people realize, and came amazingly close to Robert E. Howard’s style, not to mention ably capturing the whole Weird Tales atmosphere. Here’s the one guy today who should have been tapped to write Conan pastiche, if there’s going to be any pastiche. It’s a great piece of work, and it will probably never, ever, see print. A somber thought.

In happier news, I’ve been getting some reading for fun in another way, and that’s by reading to my children. In the last few weeks they’ve heard Robert E. Howard’s “Garden of Fear,” and Leigh Brackett’s The Sword of Rhiannon (a.k.a Sea Kings of Mars) as well as Enchantress of Venus. My little girl’s a little too young to enjoy them yet, but my boy is loving them. He’ll occasionally stop and say “wow, that was a great sentence.” I remembered that I loved The Sword of Rhiannon and Enchantress of Venus, and I still did, even after a span of years away from them. I did get pretty tired of all the typographical errors in the Millenium Press collection of Brackett’s work, however, and am going to have to track down The Sword of Rhiannon in paperback once more just so I can read a cleaner version.

Thankfully Robert E. Howard’s work’s finally easier to find, although I fear that not all of it will be collected, and I darned well wish that it was available in a hardback set. Brackett too is getting some long overdue packaging, courtesy of Haffner Press. Ah, if only all book companies put the love into their products that Haffner Press does. I don’t know that I’ve ever found any kind of typo on Steve Haffner’s publications. The bindings are excellent and so are the covers. At the Windy City Pulp and Paperback con Haffner told me that the second of three Brackett volumes would be ready by some time mid-year, pending only an introduction from Ray Bradbury. Brackett fan that I am, I’m more excited about seeing this second book and reading some potentially unread Brackett (unread by me, I mean) than I am about the new Harry Potter book. As her husband, the late, great, Ed Hamilton said, “this gal can write.” Boy could she.