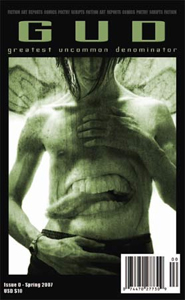 It’s into the small press maelstrom once again with Black Gate‘s David Soyka, as he considers two new offerings from the world of short genre fiction.

This month we look at the debut of an ambitious new print magazine titled Greatest Uncommon Denominator, as well as the third issue of the online publication Darker Matter. Both are crammed with lots of intriguing stories by authors such as Jason Stoddard, Bruce Boston, and Charlie Anders, and David points you to the best of the bunch.