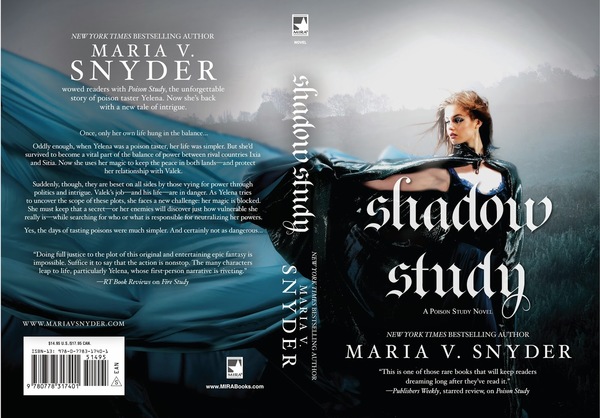 Maria V. Snyder’s first short story, “The Wizard’s Daily Horoscope,” appeared in Black Gate 11 in 2007. We published ”Cursing the Weather” in Black Gate 15, and it quickly became one of the most acclaimed stories in what was to be the final issue of the magazine. Here’s what Keith West said about it on his blog Adventures Fantastic:

Nysa… is probably as far from the sterotypical warrior woman as you can get. She’s a young girl working in a tavern, trying to earn enough money to buy the medicine needed to keep her dying mother alive. Then a weather wizard moves in across the street…  I wouldn’t have considered this one to really fit the theme of warrior woman. In spite of that, I think I enjoyed it the most. I’m going to be checking out more of Ms. Snyder’s work.

Keith wasn’t the only one to seek out Maria’s work. Her first novel, Poison Study, won the Compton Crook Award in 2006, and the third in the series, Fire Study, hit The New York Times bestseller list in 2008.

[Click on the image above for a bigger version.]

Shadow Study is the newest volumes in the series, and the first one in seven years. Here’s the book description:

Once, only her own life hung in the balance…

Oddly enough, when Yelena was a poison taster, her life was simpler. But she’d survived to become a vital part of the balance of power between rival countries Ixia and Sitia. Now she uses her magic to keep the peace in both lands — and protect her relationship with Valek.

Suddenly, though, they are beset on all sides by those vying for power through politics and intrigue. Valek’s job and his life are in danger. As Yelena tries to uncover the scope of these plots, she faces a new challenge: her magic is blocked. She must keep that a secret — or her enemies will discover just how vulnerable she really is — while searching for who or what is responsible for neutralizing her powers.

Yes, the days of tasting poisons were much simpler. And certainly not as dangerous…

Maria has spent the last seven years working on several popular fantasy series, including Glass (Storm Glass, Sea Glass, and Spy Glass), which features several characters from the original Poison trilogy; the Insider series (Inside Out and Outside In), and the Healer trilogy (Touch of Power, Scent of Magic, and Taste of Darkness).